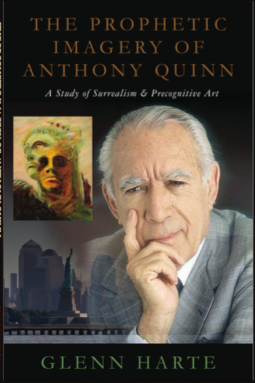 Fraser Valley (Don Lehn) – I am really not into art books, so when this book was first presented to me by the publisher and the agent for the author, I was skeptical. I started to flip through the  pages and was captured by a really intriguing story.

Here you have acclaimed Academy Award winning actor Anthony Quinn, shown to also be a painter, sculptor and artist.

Glenn Harte takes you through two major paintings that Quinn produced, both looked into the future.

Harte is an art agent, and Quinn was one of many star clients who were actors as well as artists and collections. That includes the estate of Red Skelton as well as actors Anthony Hopkins, Tony Curtis and Burt Young (known for his role as Paulie in the Rocky movie series).

Quinn’s work can be compared to (and talk about high praise) to De Vinci, Michaelangelo and Picasso when it comes to Surrealism and Precognitive Art. At 70 pages, it is not a difficult read, in fact, fascinating doesn’t come close to giving the book due justice.

The Prophetic Imagery Of Anthony Quinn: A Study Of Surrealism And Precognitive Art can be ordered through Amazon.

BC Secondary Schools Receiving Book On History of BC Labour Movement

Be the first to comment on "Book Review – The Prophetic Imagery Of Anthony Quinn: A Study Of Surrealism And Precognitive Art"