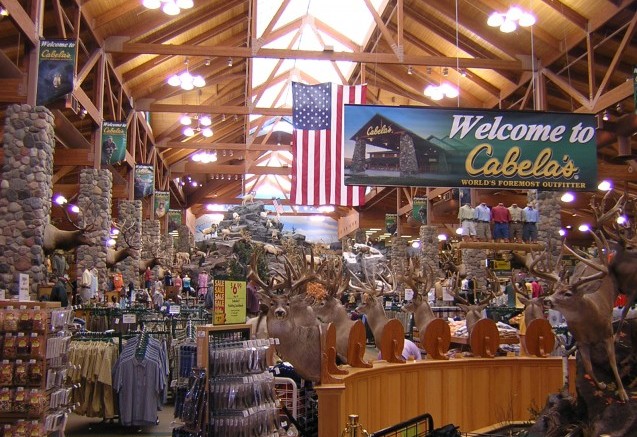 Abbotsford -MAY 18 UPDATE –  Cabela’s is ahead of schedule and that means a June 23 opening.

Their media release staes, “the store is designed to surround customers in an immersive outdoor experience with wood construction, stonework, a large mountain replica, indoor archery range and dozens of museum-quality wildlife displays. It will also include a gun library, firearms counter, conference room, fudge shop, and Bargain Cave.”

MAY 10 UPDATE – Cabela’s is aiming for a Fall 2016 launch of the new store in Abbotsford. From their media release, they are now accepting resumes.

Cabela’s employees work within an outdoor environment to create a fun and unique shopping experience while providing legendary customer service. Interested applicants with a passion for the outdoors are encouraged to apply for positions in all departments including hunting, camping, fishing, firearms counter, customer service, home and cabin and more.

The 70,000-square-foot store is scheduled for a summer 2016 opening. It is located at 1818 McCallum Road in the new McCallum Junction development off Exit 90 of TransCanada Highway. Upon opening, it will become Cabela’s second location in British Columbia, joining the Nanaimo store that opened in 2014.

The store is being designed to offer customers and employees an immersive outdoor experience with many wildlife displays and museum-quality taxidermy mounts, vintage outdoor photos and memorabilia as well as an indoor archery range. Additionally, it will include a premium firearm feature and Bargain Cave, along with thousands of quality outdoor products.

June 16, 2015 ORIGINAL STORY– Abbotsford Council has decided to move ahead with a major retail development on McCallum Road just off the freeway which would include a Cabela’s store.

They gave third reading to the rezoning and OCP amendment Monday night.

A number of concerns have been voiced around the size of the project, especially the parking lot, and the amount of residential land lost, concerns which Mayor Henry Braun says can be addressed during the development permit process.

“There are still some things that have to be ironed out with staff.  Council has obviously signaled that they are prepared to see this development proceed.  Now staff will have to work with developer on various issues.”

The vote on final approval will come at the next council meeting.