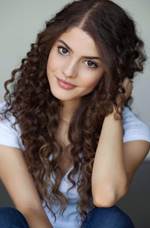 Chilliwack/Vancouver – There is a young actress to keep an eye on and she hails from Chilliwack. Mellany Barros is a 19-year old Brazilian actress and singer based in Vancouver/Chilliwack. Most recently she booked the Awesomeness Films feature Spontaneous, opposite Katherine Langford and Charlie Plummer. Mellany can be seen in the TV Movie, Death of A Cheerleader, released this past February on Lifetime. On the television side, Mellany’s credits include the CW series iZombie.

Mellany will also be interviewed and guest co-anchor chillTV’s News of the Week on Thursday May 16 at 5PM. Mellany is represented by Eva Georg at KC Talent.

Mellany is also an accomplished singer – check out her cover of “Havana”.