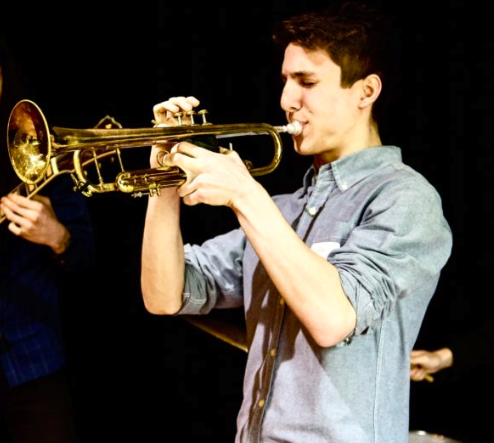 Fort Langley – Jazz trumpet student, Julian Borkowski has been selected as the first Fort Langley Jazz & Arts Rising Young Star Award. The inaugural award recognizes an outstanding student from the lower mainland who demonstrates a high level of performance ability and will be pursuing a professional career in jazz music.

Borkowski, a 19-year old second-year jazz trumpet student at Capilano University was presented with the award and a $1,000 scholarship at the recent Fort Langley Jazz & Arts Festival music line-up announcement event. The award also includes two performance opportunities at the festival. Borkowski will perform as a special guest with the VSO Jazz Faculty Band on Saturday, July 27 from 11:00am to 12 noon and in a featured performance with his band, The Julian Borkowski Quintet on Sunday, July 28 from 2:00 – 3:00pm.

Julian began playing the trumpet in 5th grade and was hooked from the start. He has participated in the BC Music Educators Association Provincial Honor Concert Band, the Surrey Senior Rep Jazz Band, The TD Intensive Jazz Band and has volunteered for the City of Surrey playing and teaching jazz at summer camps. He has also performed at the Moberly Big Band Festival and had his own big band chart performed at the festival.

“I feel absolutely honoured and excited to take part in the Fort Langley Jazz & Arts Festival,” said Borkowski, a resident of Surrey. “I’ve been to the festival before to watch and to see my name beside the incredible performers is surreal. I’m so thankful to those who’ve given me this opportunity and I look forward to playing and sharing my music.”

Applications were evaluated on the basis of calibre of artistic work submitted, demonstrated commitment and achievements in jazz performance, voluntarily involvement in passing music skills to others, goals in music and potential to become a professional practicing artist, and a performance appraisal from their music instructor.

“One of our key mandates is to support the development of youth and emerging artists and this award does just that,” said Dave Quinn, festival artistic director. “Julian’s musicianship, commitment and achievement in jazz studies and performance are exactly the reason why we established the award.

In the appraisal submitted by Julian’s music instructor, Brad Turner from Capilano University Jazz Studies Program he noted, “I have never had a better trumpet student. He is a highly gifted young musician, but his gifts do not get in the way of his work ethic, which is top-notch. His love of the jazz art form is evident every time he plays and his respect and admiration for the great players who have created and shaped the music runs deep with him and helps fuel his enthusiasm for developing his own artistic voice.

The festival schedule of show times, band line-up and festival activities will be posted in early May at www.fortlangleyjazzfest.com

The Fort Langley Jazz & Arts Festival is a not-for-profit organization with a mandate to enrich cultural life in the Fraser Valley by bringing emerging and established jazz acts and visual art together to Fort Langley for all to enjoy. Established in 2018, the festival drew thousands of residents and visitors to the streets of Fort Langley during the last weekend in July.