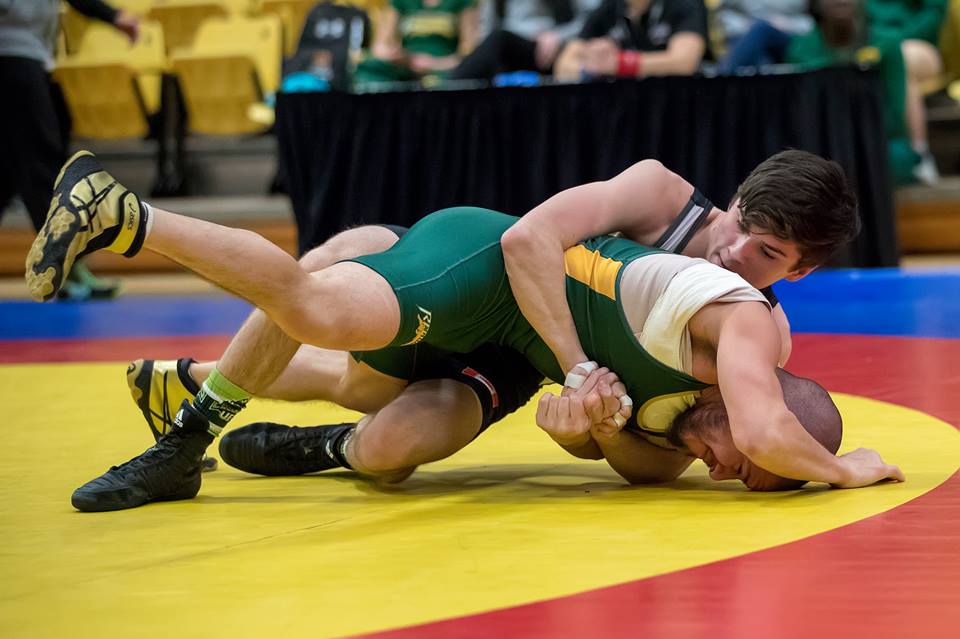 The Godinez Gonzalez sisters, Karla and Ana, dominated on the mats and at the awards banquet on Saturday as the Canada West wrestling championships wrapped up in Edmonton.

The UFV Cascades’ siblings from Surrey, B.C. each won a Canada West award in addition to individual gold medals at the conference tournament.

Cascades sophomore Karla Godinez Gonzalez was named Canada West’s outstanding female wrestler, winning all four of her matches in the 55 kg weight class without surrendering a single point. She’s the first UFV wrestler, male or female, to win a most outstanding wrestler award at the conference level.

Younger sister Ana was voted the Canada West female rookie of the year – an award Karla won last season. She laid waste to the competition at 63 kg, allowing just one point against while winning three of her four matches via technical superiority.

“The amount of time they put into wrestling is incredible – they’re students of the sport, and they did what they’re capable of this week,” Cascades head coach Raj Virdi enthused. “They’re so dominant in every position on the mat, and when they need to score, they score.

“Ana is a powerhouse wrestler – she’s so unbelievable to watch, it amazes me. And Karla wrestled a great tournament, not a single point scored on her. She wrestled like a champion. She’s ready to take the next step.”

Brad Hildenbrandt added a third gold medal for the UFV wrestling program, defending his title in the heavyweight (120 kg) division. The Surrey, B.C. product’s only close call came in his opening match on Friday, when he had to come from behind to edge Jordan Tholl of the Regina Cougars 6-4. Both wrestlers are ranked nationally in their weight class – Hildenbrandt No. 1, Tholl No. 3.

From there, it was smooth sailing for Hildenbrandt, who won a U SPORTS title and was named UFV’s male athlete of the year in 2017. He won each of his last three matches by technical superiority.

“It was great to see him win another Canada West championship, but his main focus is winning another U SPORTS title,” Virdi said. “He’s got the capability to do it, but it’s anybody’s tournament when you step on the mat. If he wrestles the way he did this week, he’ll do it again.”

In other action on the men’s side, four Cascades rookies climbed the podium. Parker McBride (54 kg), Jacob Torres (61 kg) and De’Andre Williams (76 kg) battled their way to silver medals, and Karan Dhillon (72 kg) added a bronze.

“Being a first-year wrestler, it’s tough going against guys who are much older than you,” Virdi noted. “But they wrestled with great class, the way we’ve been training the last six months. I’m proud of all the rookies – they did what they needed to do.”

The Cascades’ seven individual medalists qualify for the U SPORTS championships, Feb. 23-24 in Sault Ste. Marie, Ont. That’s a record for the UFV program, which sent four to nationals in 2017.

The Cascades finished fifth in both the men’s and women’s team standings. The host Alberta Golden Bears and Pandas swept the team titles.

Women’s Volleyball: Cascades bounce back for three-set win over Avalanche

The University of the Fraser Valley women’s volleyball team returned to form offensively to claim a weekend split on the road against the College of the Rockies Avalanche on Saturday.

The CCAA No. 7-ranked Cascades, coming off a four-set defeat on Friday in Cranbrook, got a much more efficient offensive performance in the rematch, winning by scores of 25-21, 25-15 and 25-23. They boosted their record to 13-9, tied for third in the PACWEST with the Capilano Blues, while sixth-place COTR fell to 7-17.

“I feel like we continued how we played in the third and fourth set yesterday,” UFV head coach Mike Gilray said, alluding to his team’s slow start in Friday’s opener. “Today, when we got our looks, we did a good job of hitting the ball off the block, whereas yesterday we hit it right at defenders.”

Gilray lauded the play of rookie setter Olivia Heinen, who had the Cascades firing on all cylinders. She set the table for left sides Kim Bauder (15 kills) and Amanda Matsui (11 kills) to rack up double-figure kills. Middle Hanna Hieltjes also had a strong showing with nine kills, and was voted player of the game by her teammates.

“Our transition offence was able to be successful because we put pressure on them in serve-receive, and we did a really good job of connecting offensively today,” Gilray said.

The University of the Fraser Valley men’s volleyball team’s six-game losing streak is a thing of the past, thanks to a three-set triumph over the College of the Rockies Avalanche on Saturday in Cranbrook.

The Cascades had suffered a deflating five-set loss on Friday vs. COTR, dropping the last two sets. They turned in a focused performance in the rematch, finishing each set strong (26-24, 25-22, 25-23).

UFV improved to 10-12, which leaves them fifth in PACWEST but just two games back of the third-place Camosun Chargers (12-10) with the Douglas Royals (11-11) in between. The sixth-place Avalanche wrapped up the regular season with a 5-19 record, and now wait to see how the Cascades fare next weekend in their own regular-season finales against the Columbia Bible College Bearcats. The Bearcats are 4-18, and are chasing the Avalanche for the conference’s sixth and final playoff berth.

“We were better in the end of sets today – consistently, all three of them,” UFV head coach Kyle Donen said. “I thought we got off to a bit of a sluggish start, but we put pressure on them and stole the first set. And then we managed to be good in the late stages of the next two sets to power through. We did a better job of sustaining pressure when it mattered the most.”

The Cascades got a boost when kills leader Nick Bruce returned to the lineup after being sidelined due to injury Friday.

Ben Friesen paced the UFV attack with 13 kills, and Donen was pleased with the play of a trio of Cascades youngsters who played more extensive roles than usual. Ian Jagersma, a 6’10” rookie middle, made his first career start and registered five kills and three blocks. First-year setter Brendan Loewen and sophomore right side Graeme Hughes also stepped in and sparked the Cascades.

“I saw it as a good opportunity for us to continue to grow as a team,” Donen said. “We wanted to see some of our young guys in pressure situations, and they stepped up which was good to see.”