Chilliwack (Hockey Canada) – With ticket sales already underway, the community of Chilliwack is looking to break the RBC Cup attendance record when it welcomes Canada’s National Junior A Championship May 12-20, 2018, at the Prospera Centre. 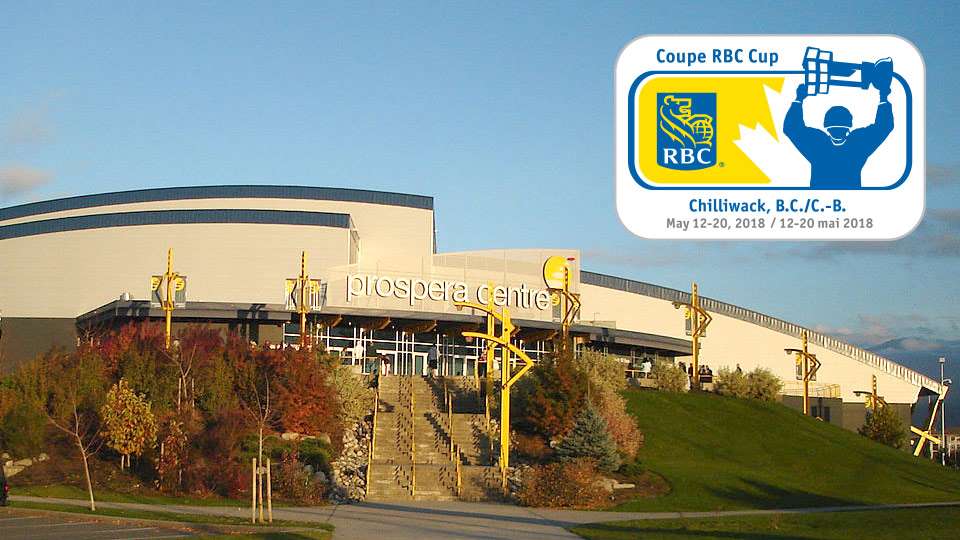 The 2018 RBC Cup schedule features 10 preliminary-round games, including the Chiefs’ tournament-opener at 7 p.m. PT on May 12, along with two semifinals, and the championship game, when the puck is slated to drop at 5 p.m. PT on May 20. TSN and RDS, Hockey Canada’s official broadcast partners, broadcast the championship game, while all other games will be available via live stream at HockeyCanada.ca/RBCCup.

“We’re proud to have the Chilliwack Chiefs represent the BCHL at the 2018 RBC Cup,” said John Grisdale, commissioner of the BCHL. “The hard work put in by Chiefs’ coaches, players, front office and management sets a high standard in our league and across Canada; with the release of the game schedule, we look forward to filling the building for all 13 games.”

Historically, the event has generated more than $2 million in local economic impact, with event proceeds being directed to supporting hockey development in the community.

“We’re excited to welcome tourists and hockey fans from across British Columbia and the country for the RBC Cup,” said 2018 RBC Cup host-committee co-chair and City of Chilliwack councillor, Ken Popove. “With today’s release of the tournament schedule, visitors can begin planning their trip to Chilliwack for this incredible sports event and other adventures in our community.”

Full-event ticket packages, which include all 13 games, can be purchased online for $179. As with other Hockey Canada national championships, the net proceeds from all ticket sales remain in the host-community of Chilliwack to assist with hockey programs that encourage the growth of the game in the city and surrounding community.

“The RBC Cup is always such a fantastic event, and it’s great to see how the community of Chilliwack and the Chilliwack Chiefs have embraced this season’s event,” said Brent Ladds, president of the CJHL. “Every year, we see the RBC Cup hosted in vibrant hockey communities, and the teams who compete at the National Junior A Championship give fans something to cheer about each and every game. And the best part of it, for me, is seeing all of the many generations of hockey fans and players who come out to support these five teams as they put it all out to win the national title.”