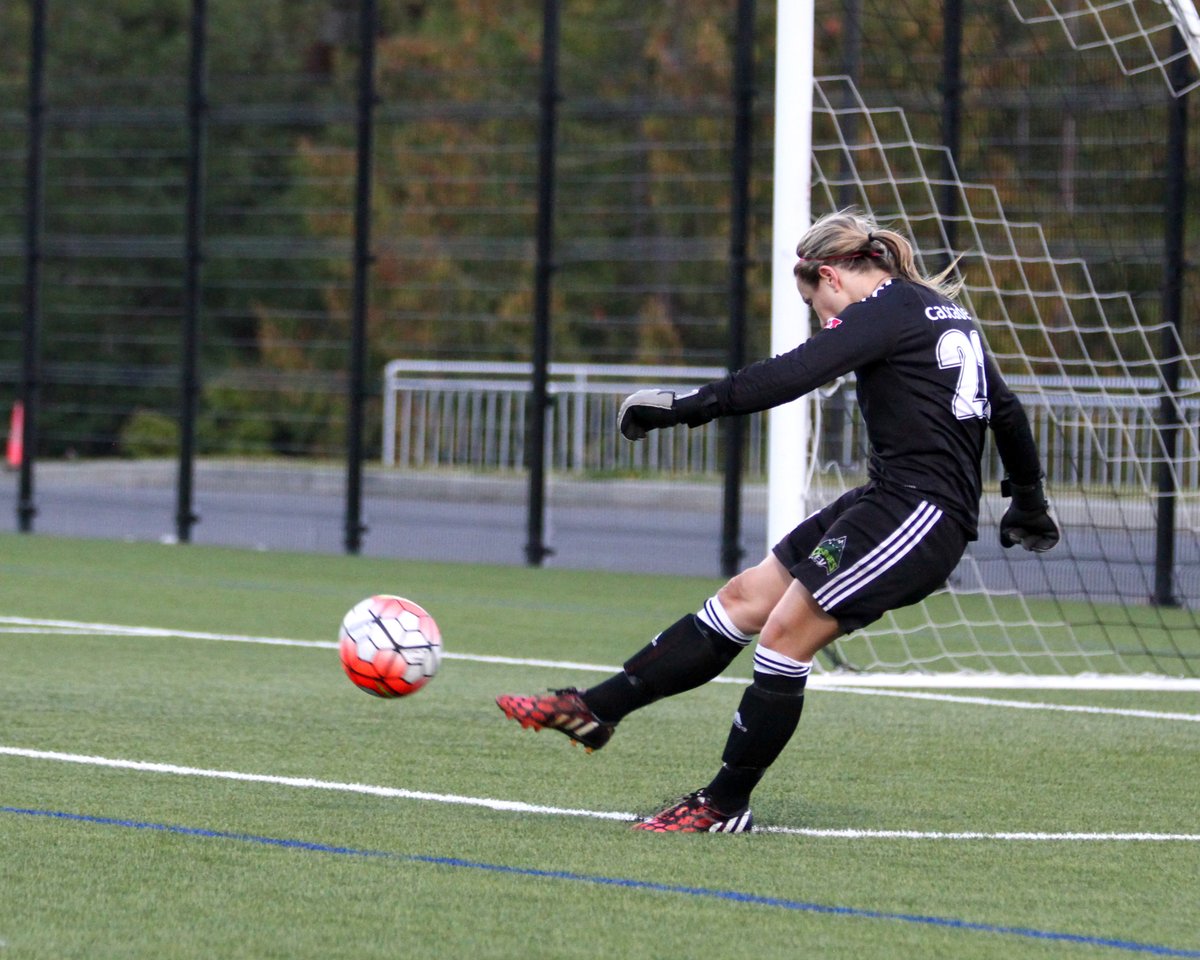 Women’s Soccer: T-Birds pull away in second half, knock off Cascades 3-1

The UBC Thunderbirds pulled away down the stretch on Saturday evening, earning a 3-1 victory over the University of the Fraser Valley Cascades in Canada West women’s soccer action at MRC Sports Complex.

Rookies dominated the scoresheet on this night – UBC’s Danielle Steer and UFV’s Sarah Parker both notched their first goals in conference play. Steer, in fact, scored twice, and Jasmin Dhanda also tallied for the visitors.

The Thunderbirds improved to 2-1-0, while the Cascades (0-1-1) suffered their first loss of the young season.

“I think we showed a little bit of inexperience today,” UFV head coach Rob Giesbrecht said. “Once the second goal went in against us, we couldn’t get a hold of the ball again. To their credit, they possessed it well, they made us chase, and our legs probably just weren’t there to get over that final hurdle at the end. But super-proud of the girls for how hard they fought.”

The Cascades generated the first good look at goal – in the fifth minute, Mackenzie Toop fired a sharp-angle shot from the left which went just wide of the far post.

The Thunderbirds found increasing traction as the half wore on, and Dhanda came within inches of giving the visitors the lead when she banged a shot off the crossbar in the 30th minute.

But less than two minutes later, UBC had their goal. A Cascades foul just inside the right border of the box yielded a penalty kick, and Steer stepped to the spot and sent a shot into the bottom corner.

UBC’s one-goal edge persisted into halftime, but the Cascades equalized roughly 90 seconds after play resumed. A quickly taken free kick by Amanda Carruthers seemed to catch the T-Birds’ defence off-guard, and Parker, from a tight angle, curved a picture-perfect strike over the outstretched arms of UBC keeper Emily Moore and just inside the far post.

Dhanda’s go-ahead goal in the 72nd minute was a near carbon copy of Parker’s – the main difference being, her shot came from the left of the box and found the far post beyond Cascades keeper Emily Harold.

Steer’s second of the game, in the 83rd minute, put the game out of reach for the U SPORTS No. 4-ranked T-Birds.

“We were missing a few kids tonight, but I’m proud of the character we showed and really optimistic looking forward,” he said. “Our girls are learning what it takes to play these teams. We’ve got to learn our lessons from these tough games and go forward, and try to minimize our mistakes. But we’re out there, we’re battling hard, and we’re not afraid to make mistakes which I like. We’re going for it. I think we’ve got a bright future ahead of us.”

The Cascades hit the road next weekend, facing the Lethbridge Pronghorns on Saturday and the Calgary Dinos on Sunday.

Men’s Soccer: WolfPack surge past Cascades in second half

The Thompson Rivers WolfPack exploded for four goals in a 12-minute span in the second half to rally past the University of the Fraser Valley Cascades 4-2 in Canada West men’s soccer action on Saturday.

The host Cascades took an early lead on Gurmaan Jhaj’s goal in the 16th minute and kept the WolfPack at bay into the second half. But Ryan Glanville’s goal in the 63rd minute opened the floodgates – Koffi Nyavor, Finlay McPhie and Colton Walker would also score for the visitors, with UFV’s Tammer Byrne also squeezing in a goal during that wild 12-minute stretch.

The result moved the WolfPack into a three-way tie with the TWU Spartans and UNBC Timberwolves for second place in the Pacific Division at 2-1-3. The Cascades (1-2-1) sit in fifth.

“They’re a good team,” UFV head coach Tom Lowndes said of the WolfPack, who will host the U SPORTS national championships later this fall. “John (Antulov, TRU head coach) has done a good job assembling a good group of guys, and you could tell they were hungry and how much it meant to them.

“We’ve got to grow up very quickly in this league, and realize we have to show up for 90 minutes every single week. Because you play good teams and if you just show up for 45 minutes here, 15 minutes there, you get punished.”

Jhaj put the Cascades ahead early on a terrific individual effort, juking his way past a defender at the left edge of the penalty area and unleashing a low shot that went in off the far post.

UFV nursed that one-goal lead into halftime – the WolfPack threatened on set pieces, but the Cascades were able to clear the ball out of harm’s way.

TRU broke through in the 63rd minute – Mitchell Popadynetz wove his way past a couple of defenders before sending a through ball to Glanville, who poked it past on-rushing UFV keeper David Hicks. Nyavor made it 2-1 in the 68th, making good from close range off a back-heel feed from Glanville.

The Cascades equalized less than two minutes after that, as Byrne rose to nod home Jhaj’s free kick. But the goal did little to shift the momentum – TRU quickly responded with a set-piece goal of their own, with McPhie getting on the end of Popadynetz’s service.

McPhie then turned provider, sending Walker in for the finish to round out the scoring.

“Any time you concede off a set piece it isn’t nice, but you should never concede from two in a game, and we did,” he said. “And then I think our naiveté and how young we are showed. We got it back to 2-2, but instead of steadying the ship for 10-15 minutes, we had some bad mistakes.”

The Cascades are back in action at home next weekend, hosting the Alberta Golden Bears on Friday and the Calgary Dinos on Saturday. Both games kick off at 6 p.m. at MRC Sports Complex.