Fraser Valley – Families and friends from throughout the Fraser Valley and beyond cheered as graduates crossed the stage at UFV’s Convocation ceremonies on June 6 and 7 at the Abbotsford Centre.

More than 2,300 students earned 2,700 credentials during the 2016/17 academic year, including the first graduate of UFV’s new Bachelor of Science in Agriculture program, Alicia van den Brink. 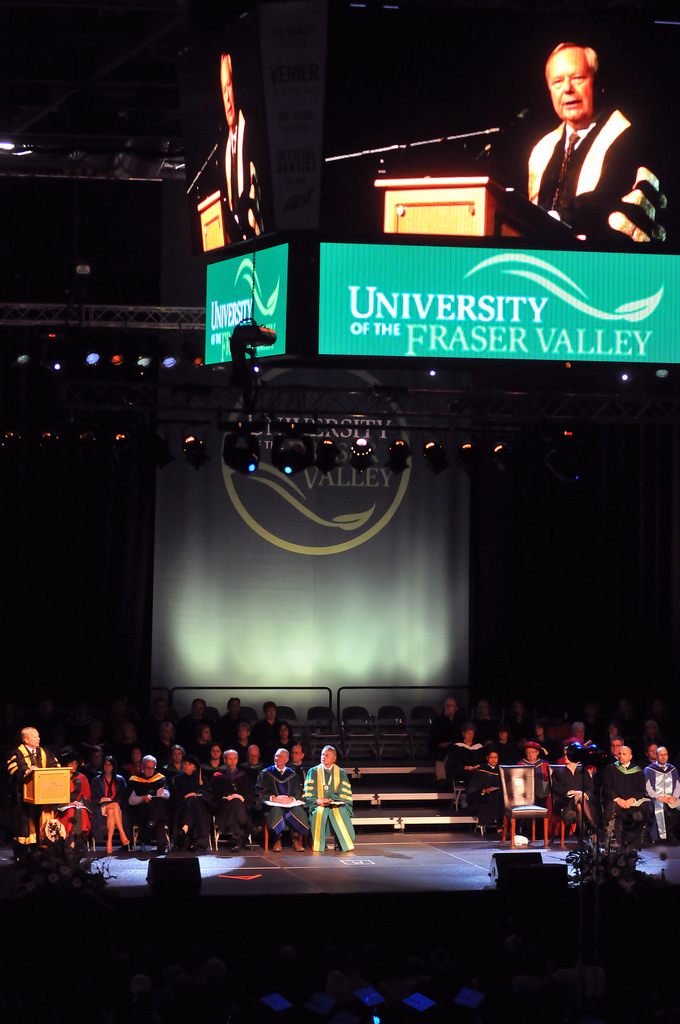 UFV President Mark Evered told the graduates he is reassured that the future is in their creative, talented, and skilled hands. “Go with confidence, go with courage, fulfill your destiny, and make us proud.”

“You can leave here today knowing that the education you received, the credential you hold in your hand, has been issued by one of the finest undergraduate teaching universities in the country. That’s something to be very proud of.”

Chancellor Gwen Point, Board of Governors Chair John Pankratz, and Evered awarded honorary doctorates to Kirsten Brazier, an aviation professional and mentor of young women in science and technology; Dr. Nadine Caron, Canada’s first female indigenous surgeon and an advocate for northern, remote, and Aboriginal communities; Andy Sidhu, the founder and publisher of The Patrika, Abbotsford’s English-Punjabi bilingual newspaper; and Tamara Taggart, co-anchor of CTV Vancouver’s News at Six and advocate for people with disabilities.

Student speakers addressed the crowd at each of the four ceremonies.

Medical Office Assistant grad Linda Todd recounted how doctors gave her little chance of surviving a life-threatening condition several years ago, but now she succeeded at university. She urged her fellow grads to never give up.

“Whatever happens, be the author of your own story. Be the one who decides how this chapter will end and how the next will begin. The only true failure is to give up. If plan A doesn’t work, there are 25 more letters in the alphabet.”

“During my studies here, I was inspired by fellow student Weslet Vildort introducing an effective irrigation system to rural farmers in Haiti… GDS students developing sustainable urban food systems, the UFV Arab Club collecting thousands of clothing items and toys for newly arriving Syrian refugees, and Anecia Gill representing girls and women in the Parliament of Canada and advocating for equal political representation.

“These are not careless millennials. I see hard-working and passionate global citizens who are concerned about our footprints on the world. I see citizens invested in the wellbeing of our communities not just locally, but also abroad.”

Teacher education graduate Nikita Griffioen recounted to the audience how her resilience and leadership skills were put to the ultimate test when she was completing her practicum at Abbotsford Secondary the day that a student was attacked and killed. Griffioen spent five hours in lockdown with her students.

“After the tragedy, I was asked if I would like to switch schools. I said no. Because I chose resilience, I was able to thrive at Abby Senior. I was able to thrive when I returned to UFV to continue classes. When the occasion arises, I encourage you to reach out to those around you. But also reach in — for your inner strength, so you can thrive and prosper.”

Kinesiology graduate Eric Bennett encouraged his fellow grads to celebrate, but also to set their sights on further prizes and achievements.

“After we take time to celebrate, we as UFV alumni need to go forward hungry for more. Graduates, I encourage you to refuse to accept this moment as our big one. Set higher goals, and leave here today with nothing but the fullest intent to achieve them.”

And a number of students earned medals of excellence.

A special thanks was extended to Point and Evered, who presided over their final convocation ceremonies as Chancellor and President.