Sharon Park of the University of the Fraser Valley women’s golf team wrapped up an outstanding rookie season with a bronze medal at the Canadian University/College Championship, punching her ticket to the FISU Summer Universiade in the process.

Extremely windy conditions at Tangle Creek Golf & Country Club in Barrie, Ont. inflated scores throughout the week, but Park battled through them to post rounds of 76, 79, 77 and 86 to wrap up the event at 30 over par. That left the Surrey, B.C. product in third place individually, 16 strokes back of winner Kat Kennedy of the UBC Thunderbirds and one back of silver medalist Laura Upenieks of the University of Toronto Varsity Blues.

The Golf Canada championship drew university and college teams from across the nation (11 women’s teams, 19 men’s teams), and the top three women’s and men’s individual finishers qualified for the 2017 Summer Universiade, Aug. 19-30 in Chinese Taipei.

Park becomes the second Cascades golfer to earn the right to represent Canada in international play, following in the footsteps of Aaron Pauls who was part of Canadian men’s teams for FISU events in 2014 and 2015. She’s the first UFV female and third Cascade overall to medal at the national university/college championship, joining Pauls (bronze, 2015) and Connor McLellan (bronze, 2016). 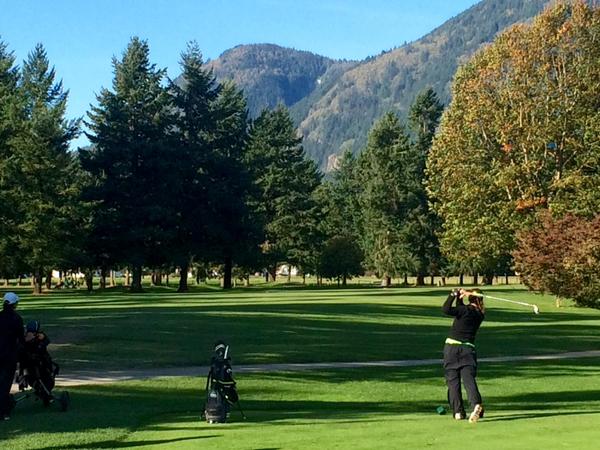 “It’s quite an accomplishment,” UFV head coach Chris Bertram said, reflecting on Parks’s play this week. “To finish in the top three at this event with the best players in the country is amazing, much less for someone in her first year going up against the best seniors in Canada. It’s pretty remarkable.”

Park, a finalist for UFV’s 2016-17 female rookie of the year and athlete of the year awards, won three times in four PACWEST tourneys last fall en route to CCAA All-Canadian honours. She added two more wins in stateside events this spring as the Cascades geared up for the Golf Canada championship.

“She strikes the ball very solidly, and in windy conditions that’s a huge asset,” Bertram said. “But she’s also matured so much this year, able to focus herself when the pressure is on. I think winning a few times this year prepared her for this.”

Park and teammates Hannah Dirksen (+52, 15th overall) and Jennifer Kell (+77, 22nd) were the only CCAA women’s squad to make the 54-hole cut, and they finished fifth in the team standings with a combined score of +159. The UBC Thunderbirds (+70), Toronto Varsity Blues (+120) and Victoria Vikes (+128) occupied the podium positions.

The Cascades were the only CCAA program to have both its men’s and women’s teams make the cut, but the UFV men struggled in the blustery conditions, placing 10th overall as a team. Halen Davis was the Cascades’ top individual finisher, tying for 16th at +21 for the tournament. Connor O’Dell (+28, T31), Zach Olson (+30, T35), Cole Briggs (+35, T49) and Nathan Bahnman (+57, 57th) rounded out the UFV contingent.

Just eight strokes separated the top five men’s teams, and the Laval Rouge et Or claimed the title at +75 for the tournament.

“Any time you make the cut at this event, it’s an accomplishment,” Bertram noted. “Getting through to the final day is a pretty big achievement for us, and obviously we would have liked to perform better over the last couple days, but we’ve got strong teams coming back next season and we’ll learn from this.”