Brendan Kohls is entering his second season wearing Huskers green. The 5’11, 210 lb linebacker out of Maple Creek, Saskatchewan finished last year with 23 tackles (solo and assisted) in 9 games, along with 2 fumble recoveries, a deflection and a blocked kick.

Not bad for a guy who went to a school more famous for producing hockey players than gridiron warriors.

In fact, hockey was the sport Brendan was playing until high school.

“It wasn’t a big thing for me growing up (playing football)” says Brendan. “My dad was a big hockey guy. I mean we watched the ‘Riders, I went to countless games, but it wasn’t until I was 15, in Grade 10 that I started really loving the sport”.

Growing up in a town of approximately 2500 people meant football was played with 9 a side, instead of 12.

“It was kind of farm-boy football,” he chuckled. “Grass fields with gopher holes sometimes. It was a real small ranching community that really embraced our team. It seemed like everyone came out on game days”.

Kohls made his way to the famed Athol Murray College of Notre Dame in Wilcox Saskatchewan to play football. It’s a school that produced numerous NHL players like Wendel Clark, Rod Brind’Amour and Curtis Joseph. He says that most of team mates on the football team were hockey players first.

“Everybody was an athlete there. We had great training facilities. It didn’t matter that there were only a few of us that were football first guys. It was really good working out with those guys, learning from each other”.

His hard work payed off, as he won the outstanding lineman award in 2014, and played starting Center in the senior bowl, helping his team win 37-13. 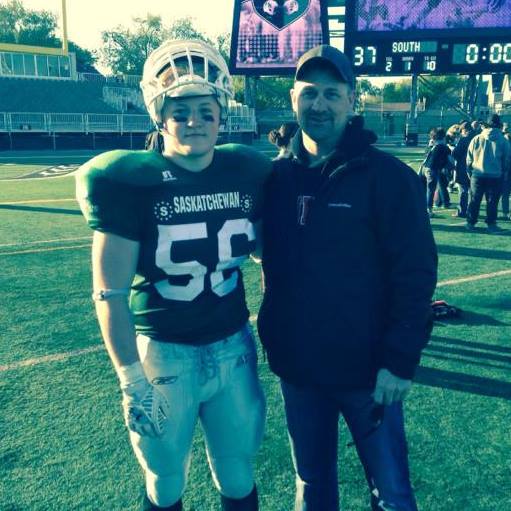 Playing either side of the line is something that really came naturally to Brendan.

“I just like the physicality of it. I love hitting guys. You just go out and do your thing, no one is focused on your game because you aren’t carrying the ball. You just go out, smash guys in the face…I mean, if you are doing that, you’re doing your job”.

Despite success at the high school level, it was a real eye opener coming to the BCFC.

“My second practice, I just got cranked by a guy. I wasn’t used to that. I was used to being the big guy, doling it out. Then we faced Kamloops in our first game”.

“I think my first tackle was on running back Jacob Palmarin, who’s a real load to bring down. Those were definitely eye opening moments early on”.

Kohls gained more and more confidence as the season progressed. 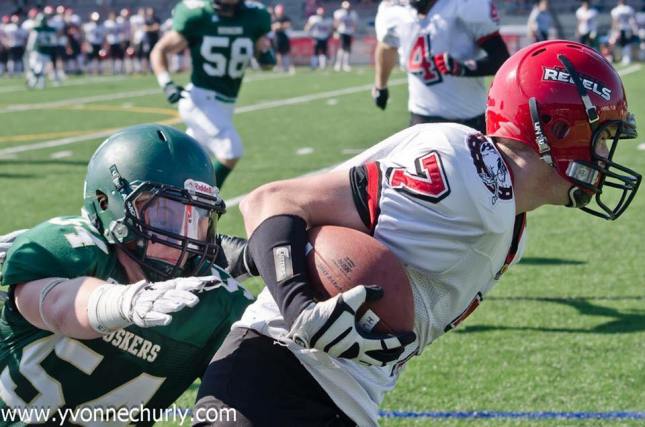 There was one game against the Westshore Rebels at home, where the Huskers were edged 27-22, that Kohls proved to himself that he belonged in this league. He had 6 tackles and a fumble recovery.

“That game was huge for my confidence. I knew I did belong, that I could make plays. It felt better knowing that was also one of our better games as a team”.

Some highlights from his rookie season can be watched here:

It’s a whole new season, with a lot of new coaches to make an impression on with Coach Jason Quinter’s staff. Kohls says he is slowly getting familiar with them, and what’s expected this year.

“We’ve been doing OTAs and working out in Abbotsford. It looks good, it’s always good to get some fresh blood and new ideas in there. I’m also looking forward to the players I’ll be suiting up with” he stated.

“We have our core coming back. We’ll be a lot more experienced, instead of being a lot of first year guys, players just coming out of high school. It’s going to be exciting to see how we work together this year. The real test is coming up though. Recruiting and Spring Camp will let us see a little more clearly as to what we truly have this season though, when we strap on the pads”.

His family has been incredibly supportive of his journey to this point. He also knows he has the ear of one of the most influential people when it comes to football should he need advice or inspiration.

“Coach Dale Udal (from the Maple Creek Redmen) was the one that really installed some passion in me. He’s the kind of guy that’s out there running sprints with us, brings his enthusiasm to every practice…every game. The kind of guy you want to play for and the reason the guys coming out of Maple Creek play the way they do and bring pride to the community”.

As for his personal goals this year?

“I want to have a higher tackle total, get involved in even more plays, make an impact. If we all do that, get better than last year, the wins will come. I’m hoping that will lead to eventually playing ball in the CIS”.

Even when his playing days eventually fade, he hopes to stay involved with the game.

“I’m studying Kinesiology at UFV. I mean, I obviously want to play for as long as I can, but this will give me the option to stay involved in football or in sports and make a difference”.

Kohls is hoping to be a difference maker on the field for the Huskers this season too.

Huskers Spring Camp gets underway from May 13-15, taking the first steps towards the 2016 season.