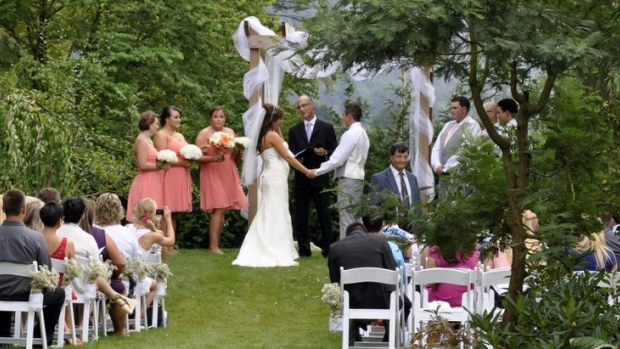 ALC Chair Frank Leonard says this is not part of a crack down on farms that host weddings (which has been a recent bone of contention), rather it is to ensure the process of special event permits are moved through the system in a timely fashion.

Leonard has been quoted stating “the additional officers will move “people who are doing something in the ALR they shouldn’t be … into a compliance situation.

He was quick to say that the regulations around weddings in particular are vague and hinted that new legislation may come from the Ministry of Agriculture in the future. When that timeline plays out, remains to be seen.

Existing wedding bookings will be honored on ALR land assuming the farms have an application pending with the ALC. That is the case with Gary and Lisa Moran and Fantasy Farms in Chilliwack/Rosedale. They host weddings as well as music festivals, hayrides, a garlic festival and a Halloween themed haunted attraction. They have a permit for 2016 but only for events that were booked in 2015. No new bookings can be made until they re-apply for a 2017 permit.

The white paper on special events on farms had an extended deadline come and go twice (November 30, 2015 and January 15, 2016) with no new information or direction.

Lately, the farm wedding issue was very quiet on the government front, especially in light of the recently wrapped NAFDMA conference which was held in the Valley. Many American farmers at the conference were wondering just what was happening in BC.

Chilliwack Mayor Sharon Gaetz and Abbotsford Mayor Henry Braun have stated that they have concerns about the wording of the White Paper but qill continue to enforce current regulations concerning safety, liquor licenses, traffic etc.