Toronto(CBC) – Ad Hawk is an occasional series evaluating the effectiveness of political advertising. NOTE that the Green Party was not noted in this article from the CBC.

Canada’s federal parties have slowed the release of new political ads over the past few weeks, but they have continued their social media activities, both from party accounts as well as personal leadership accounts.

In today’s Ad Hawk, we analyze the social media presence of each of the major parties with a focus on tone, messaging and social hits and misses. The question is, is social media merely an indicator of political sentiment, or can it determine it? 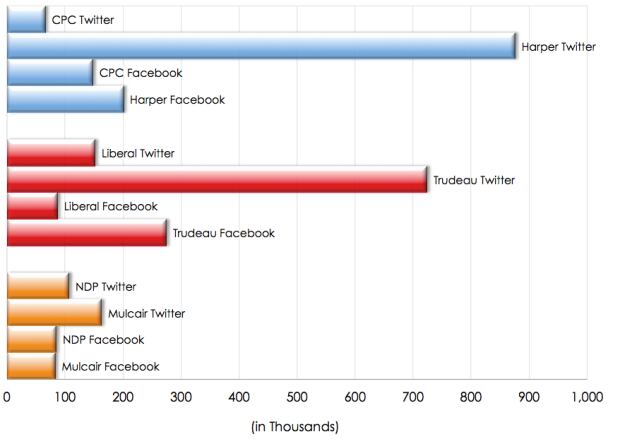 From a numeric standpoint, Conservative Stephen Harper appears to have an overall advantage on social media. However, it’s notable that Harper built much of his following in his service as prime minister. In fact, an analysis finds his most engaging tweets have been around events such as the 2014 Winter Olympics, the 2014 Parliament Hill shooting and when he met an overall-clad Justin Bieber in 2012. In fact, not one of Mr. Harper’s top 50 tweets is a campaign tweet, according to social marketing analysts klear.com.

Since campaigning began, Harper and the Conservatives have faced some challenges on social platforms. Peruse his Twitter responses and Facebook comments and it appears some users follow Harper and the party with the objective of countering or mocking Conservative messaging. This is most apparent on Twitter, where users tend to skew younger than on Facebook. 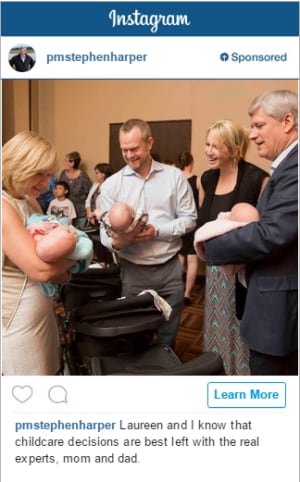 And the Conservatives have provided some social media #fails for fodder. From a humorous slipup on salmon to a Netflix meme, they’ve delivered on material.

One of these possible missteps was the Conservatives’ use of paid Instagram advertising. In fact, they were the first party to test out a sponsored ad: in this case, a photo of Harper holding a baby. No, that isn’t a joke.

Unfortunately for the Conservative leader, his social media team doesn’t appear to have done their channel investigation.

Instagram ads can be polarizing to begin with — content aside, their existence alone is seen by some users as intrusive. Given Instagram skews young and is popular among NDP and Green Party voters, according to Forum Research, it was likely not the right choice for a Conservative newsfeed gamble. User comments ranged from general upset to expletive-filled.

Liberal Leader Justin Trudeau is ahead of the other leaders on Instagram with nearly 12,000 followers on the picture-sharing social media website. (Kerry McKibbin)

All of this said, these kinds of posts do tend to generate a lot of discussion — both positive and negative. Though in elections and in social media, the maxim “there’s no such thing as bad press” does not necessarily apply. 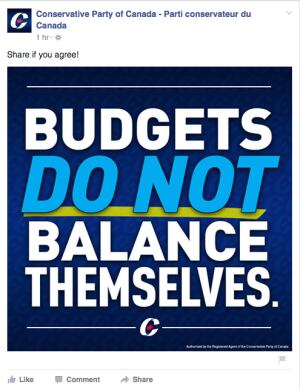 While the Conservatives are reinforcing support within their existing community, they don’t appear to be building bridges beyond it. They may be doing themselves more harm than good by motivating oppositional Canadians to action within the social realm.

The Liberals are running a close second to the Conservatives in overall social media numbers and are closing the gap, much of it due to leader Justin Trudeau’s personal accounts.

A content analysis shows that Trudeau and the Liberals are betting on likability as a key driver in his electability. Though Trudeau has sometimes posted about policies such as his proposed approach to economic stimulus, his more frequent messages have an emotional or values-based bent to them.

He uses words like “movement” and “inclusivity.” He speaks to who he will “stand with” and of “building something together with Canadians.” And he asks Canadians if they will “make history” by standing with him. This is good social strategy — it helps to create clear rallying point points for voters to gather around.

That said, while the progression of inspirational manifestos may be compelling to some, sometimes the messaging gets lost in the rhetoric.

For example, the Liberals recently started using the hashtag #GenerationTrudeau. It appears intended as a sub-campaign focused on university campuses and youth voters, though this is not entirely clear. Interestingly, this hashtag has generated a bit of a backlash, even among Liberal supporters. The use of one’s own name for self-promotion seems self-aggrandizing, especially in the context of laying claim to an entire generation. 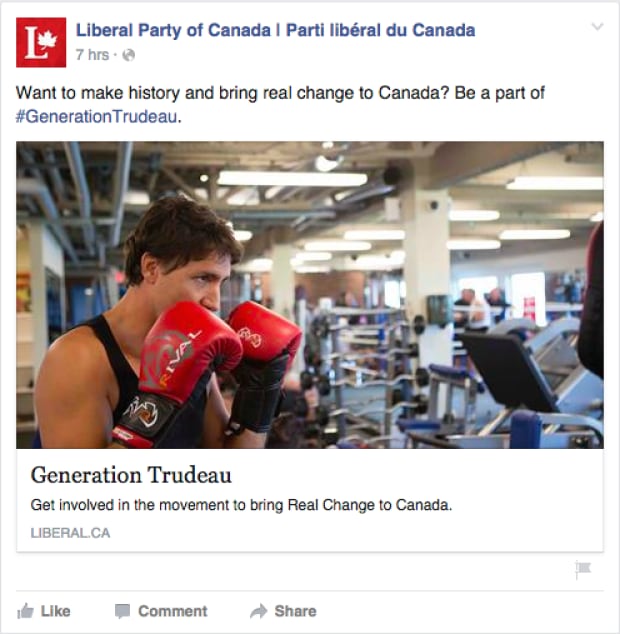 Beyond Facebook and Twitter, Trudeau appears to be having small-scale success with Instagram. Although his account stipulates it is not managed by Trudeau himself, the feeling it gives is more personal and intimate than Harper’s or NDP Leader Tom Mulcair’s — though still very polished. The photos have a voyeuristic feel, as if they offer a window into Trudeau’s family life and experiences on the campaign trail.

That is all the more apparent when viewed alongside those of Harper, whose photos seem stiff and staged by comparison. In his images, Harper often appears to “receive” crowds, with constituents lined up or in an audience. Trudeau is frequently shown surrounded by them.

Perhaps most importantly, Trudeau (or his proxy) responds to people in social channels, as does the Liberal Party in general. A scan of two months’ worth of Harper’s tweets shows no replies. You would have to go back over 50 days to find a retweet. Mulcair is better, but not quite as responsive as Trudeau.

As well, the Liberal party is moderating its channels — and doing it well. Moderators remind users to keep discussion respectful and are quick to reply with links to policy statements or information.

What the Liberals seem to understand more than other parties is that social media can create discussion. It is not a one-way message blast, but rather an opportunity for conversations with supporters as well as a way to connect them with each other.

If Harper is the heavy hand of social media and Trudeau is trying to be the warm heart, Mulcair and the NDP seem to be something else altogether. Sometimes functional, sometimes impassioned, sometimes factual, sometimes inspirational, the NDP is not exactly middle of the road, but perhaps a bit of everything.

The NDP content has more polish than the Conservatives’, but seems less like corporate storytelling than the Liberals. The party is as comfortable posting what appears to be a smartphone photo of Mulcair playing street hockey with children as it is harshly-worded (yet art-directed) anti-Harper snapshots. 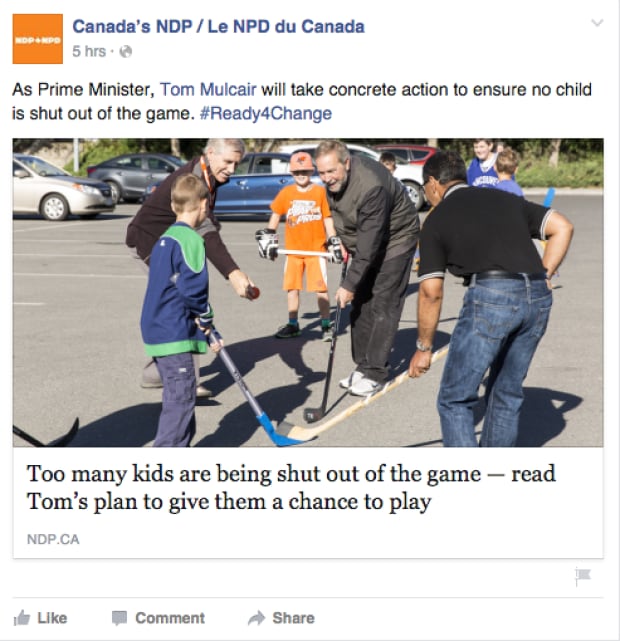 The NDP don’t shy away from takedowns, such as the anti-Trudeau budget “flip-flop” video for #NDPTruthTeam, but also proactively champion issues such as that of missing and murdered indigenous women.

This approach makes Mulcair and the NDP a bit tougher to pin down. They’re hard-hitting, but warm. Progressive in values, but occasionally conservative in tone. Ultimately, they don’t appear to be trying to own a specific, branded space on social media, which makes it harder for detractors to critique them other than to respond “[insert party or leader name] is better than the NDP.” 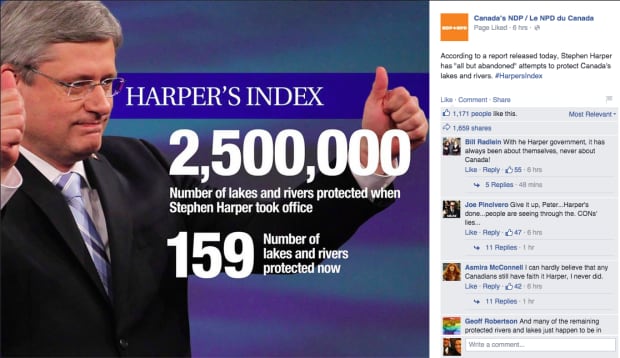 This leanness is likely due in part to Mulcair not getting as much attention until later in the election game, but is also likely not helped by the lack of a clear digital persona. Notably, Tom Mulcair’s primary hashtag is #ReadyForChange while Justin Trudeau’s is #RealChange, a closeness in positioning that helps neither party or personality.

The NDP (and Liberals as well) also focus on bilingualism; posts are almost always bilingual or double posted (one in English is followed by French, or vice versa).

Regarding his Instagram, Mulcair seems less staged than Harper, though perhaps is a bit less channel-savvy than Trudeau. He is more frequently shown in smaller groups, or one-on-one, perhaps reaching out to hold a constituent’s hand (or accept a can of Orange Crush). It fits perfectly with the NDP’s “party of the people” messaging and feels honest within the context of his account.

Though it’s doing some things right, the NDP hasn’t yet found its voice. A review of its properties makes clear what they are against, but not who they are. We may know their policies, but not their personality.

There is an adage in advertising: consumers buy emotionally, and then justify their decisions rationally. Before they buy the NDP, at least on social media, they may need more of that emotion — and more consistently.