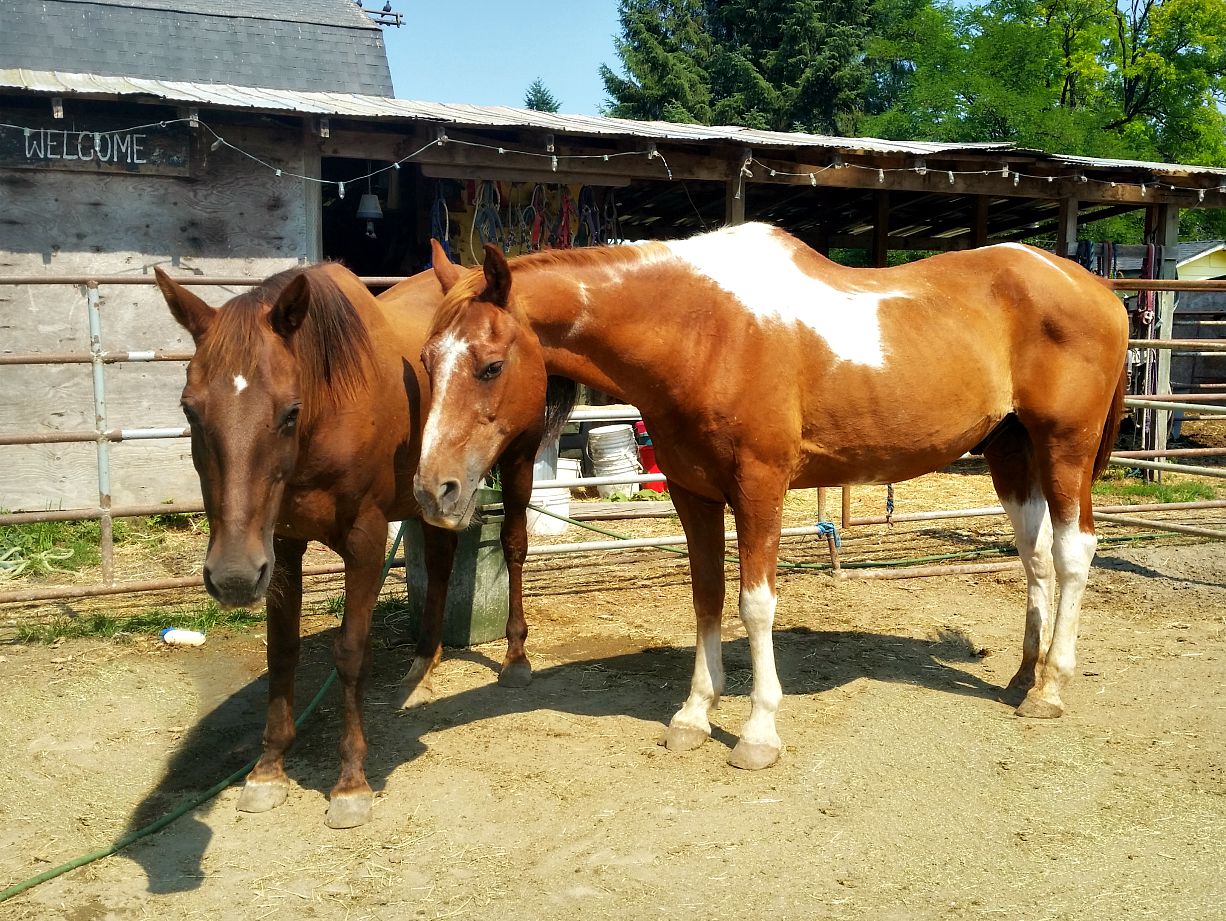 Muffie and Cooper are a pair of horses that we rescued on July 13, 2015 from slaughter. They were reservation horses who came down from Lillooet with a bunch of cattle and were on their way to the meat truck. Luckily, we were able to get to them instead. We dubbed them Muffie and Cooper in thank to a prior adopter of ours (“Muffie” Cooper) who had donated $500 towards the rescue just a few weeks prior; money that bought their freedom. Cooper is the chestnut and white Paint gelding; he is an older boy who was missing teeth and arrived very thin.

We guessed him to be around 20+ years old. Muffie is the little brown mare. She was in better shape upon arrival but was extremely scared of us and took a lot of convincing to get in the trailer to bring her home. These horses were at J&M Acres Horse Rescue for approx. 6 weeks with little interest in anyone adopting them. In that time they gained weight, had their feet fixed up and were treated to two massage therapy sessions each. However, still no one was interested in giving the pair a home.

The reality of horse rescue is that it is often hard to adopt horses out as pairs and we were becoming discouraged. With Muffie being so very bonded to Cooper and so scared of people, we couldn’t bear to separate them. That was when we were contacted by a lady from In The Woods Animal Rescue in Alberta. She told us that she had lots of room and offered the space to retire these two on her property never to be re-homed and only to be cared for and loved. As you can imagine, we were extremely excited at this possibility!

The next step was getting them there. We looked into hauling and got prices as high as $1,250 each to bring them home. Finally we found a caring gentleman by the name of Chris Neumann who offered to haul them for $650 each. Given the fact that we are a rescue as are they, we looked to our supporters to raise the $1,300 funds to get these two to their new home.

We posted a plea to get these two home and, in less than 48 hours, we had raised the full amount thanks to 19 generous donators. On the evening of August 26, 2015 Muffie and Cooper left for their new  home with In The Woods Animal Rescue! We couldn’t be happier for these two horses who, less than two months ago, were heading for slaughter and are now en route to 160 acres of love and paradise.