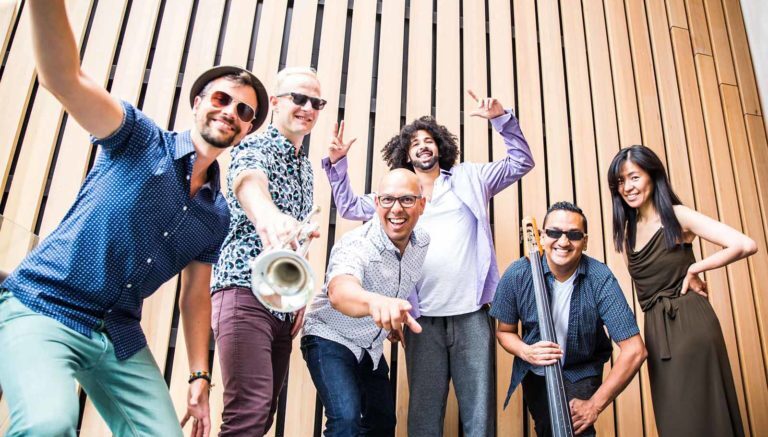 Harrison – The Harrison Festival welcomes you to the release of the brand new virtual concert doubleheader, on Friday, March 26th @ 7:00 pm.

Mazacote and Okan! Both have been nominated for Juno’s this year and will bring a bright a vibrant Latin vibe directly to your house. Both of these bands have played the Festival within the last 4 years and have been fan favourites.

Tickets are only $15.50 plus tax and you’ll have access to the video for a month after the release time. An emailed link will be sent out at exactly 7:00 pm and on the 26th. Info can be found here.

WCMA and Juno nominated world/Latin band MAZACOTE is a hard-hitting six-piece with deep roots in the music of Nicaragua, Mozambique, and Colombia. Inspired by Afro-Caribbean percussion and tropical party sounds, they play brass-heavy Latin dance beats with a socially conscious message.

Their new politically-charged album PATRIA, draws upon themes of identity, immigration and resistance, reflecting on the plight of those escaping violence and corruption in Latin America and around the world.

Born in Havana, Cuba, Elizabeth Rodriguez is a classically trained violinist who served as concertmaster for Havana’s Youth Orchestra. Magdelys Savigne hails from Santiago de Cuba and graduated with honours in orchestral percussion from Havana’s University of the Arts. Both are also Grammy-nominees for their contributions to Jane Bunnett and Maqueque, of which they are former members.