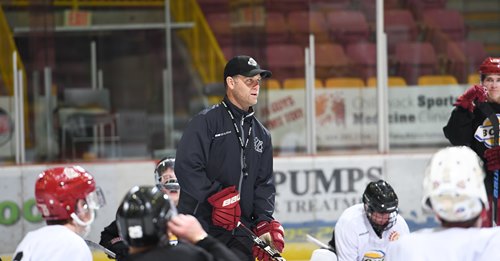 Chilliwack/Ottawa – The Canadian Junior Hockey League announced Monday the coaching staffs of Canada East and Canada West, who had been chosen to guide their respective sides at the 2020 World Junior A Challenge. The event had been scheduled to take place this December in Cornwall, Ont., but was cancelled earlier this month due to the COVID-19 pandemic.

Selected as head coach of Canada West was the Chilliwack Chiefs own Brian Maloney.

“It’s an honour anytime you get the chance to represent your country. I got a little taste of it last year and it was a great experience to be around that setting.” Maloney said. “It’s a nice feeling personally. But it goes behind that. It’s good for our organization, it means we must be doing something well.”

Maloney was the only member of any BCHL club selected to be behind the bench for the event.

This would have been Maloney’s second straight year with the team, having served as their video coach last tournament. The Chiefs bench boss also led Team West to victory as head coach at last season’s CJHL Prospects Game in Hamilton, Ont.

Jamie McCaig, director of operations for Team West, said that while the event may be cancelled it was still important to recognize the coaching staff.

“We felt that announcing our selected staff was the right thing to do for the successful candidates, their respective club teams as well as their respective leagues,” he added. “At the conclusion of a very thorough application and interview process, I am confident that we selected a first-class staff that would have represented the west very well.  All of these coaches deserve the honour and recognition that comes with being associated with Hockey Canada and the CJHL.”

Cornwall is expected to host the 2021 World Jr. A Challenge at a yet to be determined date.

Be the first to comment on "Chief’s Maloney Selected as Head Coach for World Jr.A Challenge"