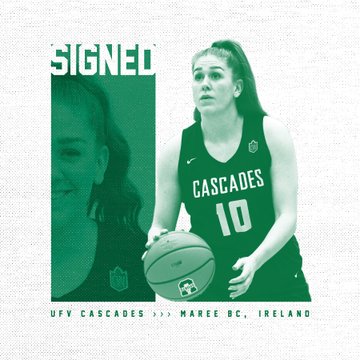 Abbotsford – The University of the Fraser Valley women’s basketball program is pleased to announce that Taylor Claggett and Deanna Tuchscherer have signed with European professional clubs for the 2020-21 season.

Claggett, who wrapped up a record-breaking five-year run with the Cascades in the spring, will suit up for Maree Basketball Club in Galway, Ireland. Maree is part of the Women’s Super League, the top tier of women’s basketball in Ireland.

Tuchscherer, the reigning Canada West rookie of the year, is taking a one-year hiatus from the Cascades to join ZTE NKK in Zalaegerszeg, Hungary, playing in that nation’s top league, the NB I/A.

“It’s amazing that these girls from our program have the opportunity to go to Europe and continue their development as basketball players,” UFV head coach Al Tuchscherer said. “Taylor has had an outstanding five-year career here at UFV, and I’m confident she will excel in the professional ranks. Deanna has a unique opportunity this year to grow and challenge herself in a pro environment, and our program stands to benefit from those experiences in the longer term.”

Claggett, who hails from Mission, B.C. and played her high school basketball at Abbotsford’s Mennonite Educational Institute, graduated from UFV with a Bachelor of Arts (English major) earlier this year. The 5’11” forward was a two-time Canada West all-star (first team in 2019-20, third team in 2018-19) and earned U SPORTS second team All-Canadian honours following a sensational senior year. She won the Canada West rebounding title (10.4 per game), finished second in the scoring race (19.6 points per game), and averaged 3.4 assists to finish ninth in the conference. She was the only player to rank top-10 in CW in all three categories in 2019-20.

Claggett drew interest from teams in Spain, France and Israel earlier this year, only for those opportunities to fall through due to COVID-19 restrictions. The opportunity in Ireland came together in less than a week.

“It’s kind of crazy that I can now call myself a pro basketball player,” Claggett enthused. “I’m really excited to get back on the court again, but I’m nervous, too. I’m a homebody, so it’ll be a big step. But I’m ready for a new challenge – this is just a different type of challenge than I’m used to.

“The coach was telling me that the style of play over there is very physical, and from watching my game tape, he thinks I’ll be a good fit. Going in there as an international player, I’ll need to be ready to do my job right away.”

Deanna Tuchscherer earned a series of conference and national accolades during a sparkling rookie campaign. In addition to her Canada West rookie of the year nod, she was a conference third team all-star, and a U SPORTS all-rookie selection. The 6’1” forward out of Chilliwack’s G.W. Graham Secondary finished second on the team to Claggett in scoring (15.4 points per game, 10th in CW) and rebounds (6.2), and set a Cascades team record for points in a CW game with 35 vs. Trinity Western on Jan. 16. She also led all rookies nation-wide in total points (308) and field goals (123).

The Canada West basketball season has been postponed until at least January, with a decision on a possible second-semester schedule to be made by Oct. 8. Given that uncertainty, Tuchscherer felt that taking the opportunity to develop in a pro basketball setting was a wise move. Her four remaining seasons of eligibility will be intact when she returns to UFV in the fall of 2021.

“It’s definitely scary, but it’s also an adventure,” said Tuchscherer, who plans to take UFV online courses towards her kinesiology degree while she’s in Hungary. “I think I can grow a lot on and off the court, taking this leap.

“For me, the big thing is, it’s the best opportunity for me to make the most out of this year and develop as a player. I’ll get to continue to play competitively, and it’s not a guarantee that we’ll get to do that to the level we want this year (in Canada).

“I’ll get to play against older, stronger, more experienced women, and I’ll gain experience. It’ll be a different style of basketball – all across the world, there are different flairs to the game. It’s the same game at the heart of it, but I’ll get to learn different things that they do there that we wouldn’t maybe think to do here.”