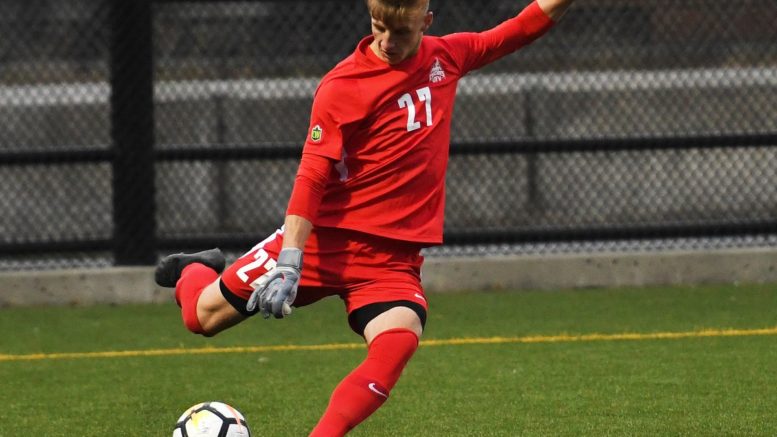 The University of the Fraser Valley men’s soccer squad battled the UBC Okanagan Heat to a scoreless draw on the road Saturday afternoon in Kelowna.

Both teams had their chances, but both came up empty in the goal-scoring department and picked up a single point apiece.

It’s the third straight clean sheet for goalkeeper Ethan Duggan and the Cascades, whose record in Canada West play now stands at 3-3-4 heading into Sunday’s road tilt with the Thompson Rivers WolfPack (2 p.m., CanadaWest.tv). The Heat are 6-3-2.

“Tale of two halves, definitely,” UFV head coach Tom Lowndes observed afterward. “First half we dominated, controlled the tempo of the game, and kept possession for almost the whole half. We created a couple good chances and weren’t able to put them away. In the second half, the opposite – they were in charge. We had to defend, we had to be brave. But I’m very proud of the way we defended – it was heroic at times which was pleasing to see. And obviously a third clean sheet is very positive.”

The Cascades, indeed, lived in the attacking third throughout the first half. Their best chance to score came in the 12th minute – Atle Koellmel played a deft ball through to Brady Weir, and he fired a blast from point-blank range at the top of the six-yard box, but the ball was straight at UBCO keeper Nicholas Reitsma.

The field tilted the other direction after halftime, with the Cascades repelling wave after wave of Heat forays.

UFV did generate a quality chance in the latter stages when Nawaf Binsaleh got his head on Weir’s corner, but it went just wide.

The Heat had a golden opportunity to claim all three points in the 89th minute off a corner by Spencer Young. Hamish Walde headed the ball off the crossbar from close range, and Corbin Beauchemin followed with a header of his own that went over the bar.

Duggan registered three saves and was named the Cascades’ player of the match.

The University of the Fraser Valley women’s soccer team was unable to translate second-half dominance into production on the scoreboard, ultimately settling for a 1-1 draw with the Victoria Vikes on Saturday evening at MRC Sports Complex.

UFV rookie winger Katie Lampen opened the scoring in the 12th minute, and UVic’s Rachel Baird equalized in the 32nd. The hosts carried the play for the final 45 minutes, but despite numerous chances – the Cascades outshot the Vikes 19-9 – they were unable to solve UVic keeper Puck Louwes down the stretch.

The Cascades’ third consecutive tie leaves them at 2-2-4 in Canada West conference play, while the Vikes are 3-2-3.

“It’s more disappointing today,” said UFV head coach Rob Giesbrecht, noting the contrast in post-game contentment between Saturday’s result and Friday’s 1-1 draw with UBC. “Last night we score late to tie, and today we get out front and then they tie it up. I thought we dominated the second half . . . today’s more about two points dropped than a point earned, I think.”

Lampen’s early goal was her team-best fourth of the campaign, and marked her third straight game with a goal. Cascades captain Brittney Zacharuk sent a gorgeous cross from the left, and the Chilliwack product rose between two Vikes defenders to volley it home.

The Cascades continued to press, and Lampen nearly had another, but was unable to make solid contact with another dangerous Zacharuk cross.

The Vikes found more traction as the first half wore on, and they equalized off an Avneet Rai corner. Baird found the ball in the ensuing chaos, and was able to poke it past UFV keeper Joven Sandhu.

Zacharuk spearheaded the Cascades’ second-half surge, generating chances for herself and her teammates. Twice she just missed the top corner – once from the right wing during open play, and once from a free kick just outside the penalty area. Then in the 64th, her volley off Simi Lehal’s cross required a spectacular save from Louwes diving to her left.

The Vikes generated a chance off another Rai corner, but Baird’s shot went wide this time. At the other end of the pitch, UFV rookie midfielder Halle McCambley took a crack at goal from distance, and banged it off the crossbar. Then, in the 90th minute, Lampen got a piece of yet another Zacharuk cross, but Louwes was able to scoop it up.

“I loved a lot about how we played,” Giesbrecht said. “Aside from that final product, it was pretty good in the second half. We created six or seven corners in the second half, we hit the bar, we got players in behind.

“I also liked the grit we have in our back four and our holding mids. They’re physically winning a lot of battles, and they’re becoming a tough team to play against. I don’t think teams enjoy playing against us because of how hard we battle, and those are some young kids in those spots. You have (holding midfielders) Halle and Tavia (Jasper), they’re first and second year, and Alanna (Sydenham, another rookie) had a great game at left back. It’s just great to see these young kids battle.”

Up next for the Cascades is a Friday-Sunday road trip to face the Calgary Dinos and UNBC Timberwolves.