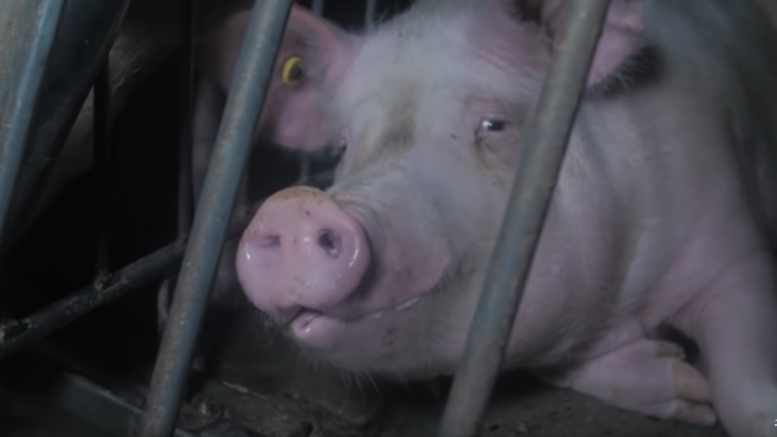 Abbotsford – New footage taken with hidden cameras has been obtained from Excelsior Hog Farm. In a mass media release, Animal Cruelty Lawyer Anna Pippus states: An undercover investigator responsible for obtaining that footage has since revealed their identity to the SPCA and is hoping to see charges laid. The BCSPCA confirmed that they received the new footage, and re-opened the animal cruelty case on Excelsior hog farm.

This footage, released last week, shows workers using cattle prods on pigs in the face, kicking and striking pigs, and castrating piglets without analgesic, and more.

Protesters converged on that same farm in April. That FVN story is here.

Representatives of the BC Pork Producers Association (BCPPA) responded to concerns regarding animal care brought to the organization’s attention by CTV on April 22. Since then PETA and the SPCA were looking into video. The farm owners wanted answers while at the same time, concerned about trespassing.

In the same release, Animal Cruelty Lawyer Anna Pippus went on to say:

“British Columbia animal protection law prohibits causing or permitting an animal to be, or to continue to be, in distress. Additionally, Canadian federal law prohibits wilfully causing unnecessary pain, suffering or injury to animals.

The Code of Practice for the Care and Handling of Pigs, published by the National Farm Animal Care Council, establishes standards for pig farming. These standards are recognized by BC law as reasonable and generally accepted farming practices.

Well Known Chilliwackian To Be Locked Up By The SPCA Wednesday