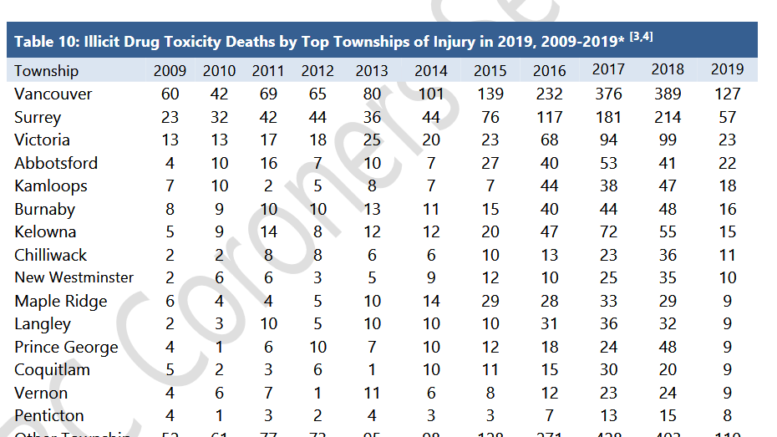 Victoria/Fraser Valley – The BC Coroners Service has published updated reports on illicit drug toxicity deaths and fentanyl-detected drug deaths to the end of May 2019.

For Abbotsford, the death rate is on pace to equal last year, while there has been a drop in Chilliwack.

Overall in BC , there have been 462 illicit drug toxicity deaths in the first five months of 2019, down 30% from the 2018 total (651) over the same period. The data is subject to change and totals for 2019 will likely increase as post-mortem testing results are received, but it is a sign for cautious optimism.

Key findings of these drug death reports include:

* The monthly average for illicit drug deaths for the first five months of 2019 (92 deaths/month) is down by approximately one-third from the same period in 2018 (130 deaths/month).

* For the first five months of 2019, almost nine in every 10 illicit drug deaths occurred inside, including more than half in private residences.

* Over the same time-period, there were 58 suspected illicit drug overdose deaths with fentanyl detected in May 2019 and 67 in April 2019.

* No deaths have been reported at supervised consumption or drug overdose prevention sites.

Be the first to comment on "Illegal OD Deaths To May 31 – Abbotsford Same Pace As 2018, Drop In Chilliwack, BC"