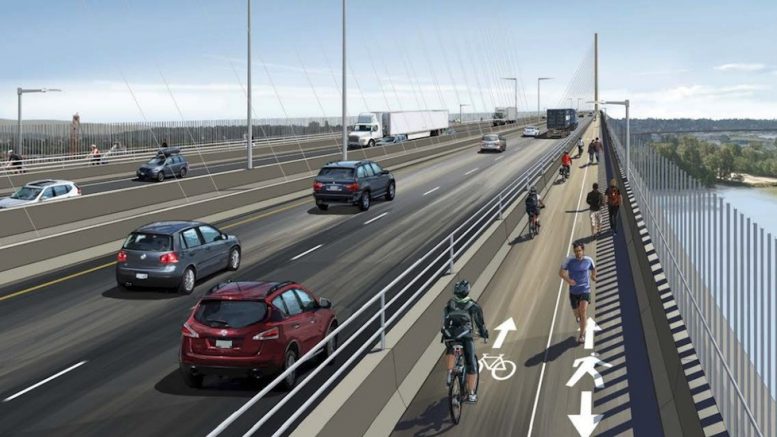 George Heyman, Minister of Environment and Climate Change Strategy, and Selina Robinson, Minister of Municipal Affairs and Housing, have decided to issue an environmental assessment certificate to the Ministry of Transportation and Infrastructure for the Pattullo Bridge Replacement Project.

The ministry proposes a four-lane bridge to replace the existing Pattullo Bridge. The new bridge would cross the Fraser River and be constructed about 100 metres upstream of, and roughly parallel to, the existing bridge location that connects the City of Surrey and the City of New Westminster.

Estimated construction of the new bridge and demolition of the old bridge will create 3,935 person years of direct employment in B.C. over five years of construction, with $1.1 billion in project expenditures, contributing $353 million to B.C.’s gross domestic product.

Having considered the Environmental Assessment Office’s (EAO) Assessment Report and the recommendation of the executive director of the EAO to issue a certificate, the ministers are confident that construction, demolition and operational activities would be conducted in a way that ensures that no significant adverse effects are likely to occur. A record of the factors that the ministers considered in making their decision can be found in the Reasons for Ministers’ Decision at: https://www.projects.eao.gov.bc.ca/p/pattullo-bridge-replacement

In addition to the 20 conditions that are part of the project’s environmental assessment certificate, design requirements are specified in the certified project description, which are legally binding requirements that the ministry must meet to maintain compliance with the certificate. The conditions were developed following consultation and input from Indigenous groups, government agencies, communities and the public.

The ministry is also required to obtain other federal, provincial and local government permits or approvals, including a project and environmental review permit from the Vancouver Fraser Port Authority, in order to proceed with construction of the project.

Key conditions for the project require the development of the following plans:

These Indigenous groups actively participated in the working group and technical discussions, discussed issues and concerns, refined the methodology for assessing impacts on Aboriginal Interests, and worked on the development of the proposed conditions and co-drafting of the decision materials. The EAO and Ministry of Transportation and Infrastructure provided funding to facilitate participation in the environmental assessment process.