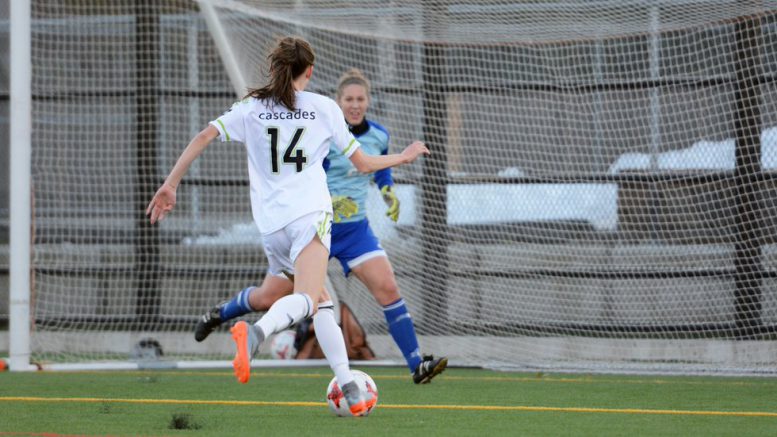 The University of the Fraser Valley women’s soccer team is loading up for the 2018 season and beyond, signing six Class of 2018 recruits.

All six players are from the Fraser Valley region, and are in the midst of their Grade 12 years. Among the signees are four midfielders – Vanita Bhullar (Delta), Tavia Jasper (Langley), Daniella Bavaro (Coquitlam) and Cailin Letkemann (Cloverdale) – and a pair of forwards – Nikki Gregory and Mackenzie Silbernagel (both from Chilliwack).

“We’re thrilled to be bringing these six girls in,” Cascades head coach Rob Giesbrecht enthused. “Not only will they improve the depth of our program, there are players in this group who will be challenging for starting roles immediately. I can definitely see these players being the core of a successful era for Cascades women’s soccer.”

The younger Bhullar is a versatile athlete who won three consecutive provincial titles (2015 to 2017) with Coastal FC and made three subsequent appearances at the national championships. She’s also been a B.C. provincial team player since 2015, and was selected for the all-star team at the Pacific Series Challenge.

“We’re thrilled Vanita has decided to join the UFV women’s soccer program,” Giesbrecht said. “She’s an intelligent player who can succeed both as a central midfielder and as a central defender. She’s an excellent passer of the ball who reads the game exceptionally well, and she can chip in offensively too. Vanita will have a bright future as a Cascade.”

“I believe UFV will help me grow as both a student and an athlete,” said Bhullar, who plans to major in psychology. “My career goal is to become a lawyer, and I think UFV is perfect for that, especially because of the small class sizes. From the soccer perspective, I want to have a positive impact on the team from the very start and I want to earn my spot in the starting 11. During my time at UFV, my biggest dream is to win the national championship.”

Jasper is a multisport standout who has an incredible track record of team success in both soccer and basketball. On the pitch, she was a part of four straight League Cup championships (2014 to 2017) at Coastal FC, and was named the provincial championship MVP in 2015. On the hardwood, she helped the storied Brookswood Secondary Bobcats girls basketball program win the 2016 B.C. AAA title, and earned a pair of female athlete of the year awards (2014 and 2016) at Brookswood.

“Tavia is an outstanding athlete who will thrive in the competitive environment that awaits her in Canada West women’s soccer,” Giesbrecht predicted. “Tavia is a ball-winning central midfielder who is very good on the ball. She competes hard and will not shy away from the physical battles. We’re excited that she’s chosen to come to UFV and play for our program.”

“I chose UFV because of their excellent soccer and kinesiology programs,” Jasper explained. “My goal while attending UFV is to contribute to the women’s soccer team and excel academically.”

Gregory, a gifted offensive player, was a key contributor on some outstanding club sides at Coquitlam Metro Ford, winning B.C. Premier League Cup titles in 2016 and 2017.

“Nikki is a dynamic attacking player who will be a constant threat for our team and a tough player for our opponents to deal with,” Giesbrecht said. “She has the pace and the athleticism that top offensive players in Canada West have. She can get behind opponents as well as cause problems with her pressing. Nikki will thrive in our program and we look forward to adding her attributes to our attack.”

Gregory will begin her academic career at UFV in general studies.

“I chose UFV because it’s close to home, and both my siblings attended,” she said. “My goals during the time I’m with the Cascades are to continue improving my soccer skills, learning new skills along the way, and creating new friendships with my teammates. I’m looking forward to being a part of the Cascades.”

Bavaro also boasts an impressive multisport pedigree, having been selected for Team B.C. in box lacrosse back in 2014. She has also suited up for the provincial team in soccer (2014 and 2015) and was nominated for Surrey United player of the year in 2015. She was part of a League Cup-winning side in 2016 with fellow Cascades recruit Cailin Letkemann.

“Daniella is a competitive player who can succeed as a holding midfielder or as a defender,” Giesbrecht said. “She reads the game very well and she can utilize her tactical awareness to keep her team in possession. I really like Dani’s competitive mentality. She works extremely hard and we are thrilled she has committed to our program. She will have a bright future.”

“As soon as I walked into UFV I had a good feeling, and it felt very welcoming,” said Bavaro, who will study business. “My first meeting with Coach Rob was very impressive. Everything we talked about seemed like a good fit for me, both as a student and as a player. I want to excel in the program and make an impact to the Cascades team.”

Silbernagel was part of a U14 provincial championship-winning team in 2014 with Fraser Valley Premier, and helped them to a fifth-place finish at the national championships. She’s also excelled on the high school soccer scene, leading the Sardis Falcons to back-to-back B.C. AAA championship appearances, finishing 13th in 2016 and fourth in 2017. She was selected for a Commissioners 11 award at the 2017 high school provincials, and has earned multiple tournament all-star nods, including an MVP award from the W.J. Mouat tournament.

“Mack is a competitive attacking player with lots of potential,” Giesbrecht said. “We are excited to be adding her to our team. Mack’s work rate is outstanding, her mentality sets her apart and allows her to thrive in competitive environments. We are looking forward to watching her progress and develop into a contributing player for our program.”

“I chose UFV because it’s close to home, so my parents can come support me,” said Silbernagel, who will pursue a Bachelor of Criminal Justice degree. “Also, I get the chance to represent a hometown school which has been a dream of mine.

“I plan on being and doing my absolute best to make this team win. My goal is to practice hard and be better than I was the day before.”

Letkemann was part of a successful club side at Surrey United, joining forces with Bavaro to contribute to a League Cup-winning campaign in 2016.

“Cailin is another great addition for our program,” Giesbrecht said. “She is an intelligent midfielder who can distribute the ball very well. Cailin reads the game exceptionally well and has the potential to develop into an effective Can West central midfielder.  We are very excited that she has chosen to play for our program and we look forward to seeing her progress as a U SPORTS central midfielder.”

“I chose UFV because of their excellent soccer and kinesiology programs,” said Letkemann, who plans to study kinesiology. “My goal while attending UFV is to contribute to the women’s soccer team and excel academically.”