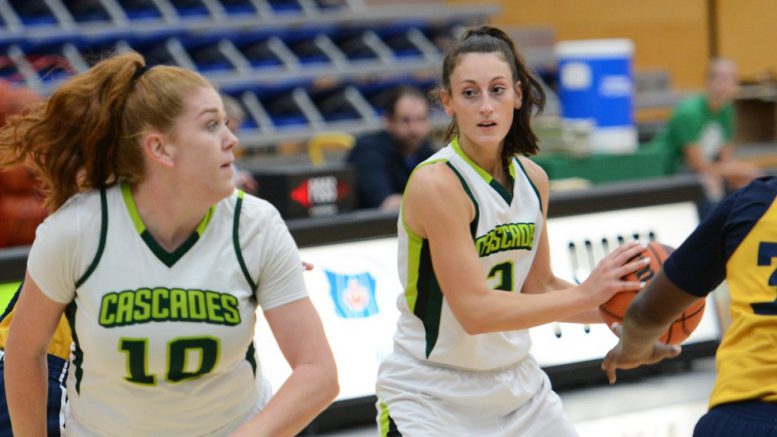 Men’s Basketball: Vikes fend off Cascades down the stretch in exhibition action

The Victoria Vikes pulled away in the fourth quarter to knock off the University of the Fraser Valley men’s basketball team 71-58 in exhibition action on Saturday afternoon.

The Vikes led 18-13 after the first quarter and 33-24 at the half, but the host Cascades found some traction in the third quarter, outscoring the visitors 21-15 in the frame to cut the deficit to 48-45.

The fourth quarter, though, belonged to the Vikes, and they put the finishing touches on a second consecutive win over the Cascades. UVic was coming off a 76-53 win on Friday.

“The third quarter was a real bright spot for us,” UFV bench boss Adam Friesen said afterward. “We’re a young group, and there’s no answers to many questions right now. Any time we can find out some answers, it’s a great moment. It lets us know how we’ll need to play this year.

“We have to play at a certain pace, and we’ve got to be aggressive. If we ever stand still, that’s going to make life hard for us.”

UFV’s Daniel Adediran was a standout for the second straight day – the sophomore forward notched a double-double with 14 points and 11 rebounds, leading the team in both categories. Mark Johnson counted a trio of three-pointers among his 11 points, and rookie guard Kenan Hadzovic notched 10 points off the bench. The Cascades struggled from the free throw line as a team, going 6-for-15.

Up next for the UFV men’s hoopsters is a stateside exhibition trip to Northwest University in Kirkland, Wash. They’ll face the Eastern Oregon University Mountaineers on Friday and the host Northwest Eagles on Saturday.

Women’s Basketball: Vikes dial up the defence to earn weekend split with Cascades

A pair of prolonged offensive droughts cost the University of the Fraser Valley women’s basketball team on Saturday afternoon, as they dropped a 58-41 exhibition decision to the Victoria Vikes.

The Cascades, coming off a 72-60 win over the Vikes on Friday, were limited to single-digit scoring in the first and third quarters, allowing the visitors to pull away at the Envision Financial Athletic Centre.

“For as good as we were last night, we were that bad tonight,” Cascades head coach Al Tuchscherer analyzed. “We had real effort and toughness issues. Our ability to persevere through adversity was very weak tonight. This team needs to learn how to play tougher, and make tough and timely plays. We didn’t do that at all tonight.”

The Vikes had the defensive intensity dialed up to 11 from the opening tip – they began the game on a 12-0 run and led 18-6 at the end of the first quarter.

The Cascades found their footing in the second, reeling off a 13-0 run to go up 21-20. But the Vikes surged in front in the late stages of the frame and led 29-24 at the break.

The visitors carried that momentum into the third quarter, outscoring the Cascades 18-5 to seize control, and they kept UFV at bay in the fourth.

UVic’s Amira Giannattasio had an outstanding performance, racking up a game-high 22 points on 10-of-15 shooting from the field. Kristy Gallagher notched 11 points for the Vikes, who out-rebounded the Cascades 43-29.

Shayna Litman was the lone Cascade to score in double figures, posting 13 points and seven boards. Taylor Claggett scored seven of her nine points in the first half. UFV struggled from the foul line, hitting just 8-of-17 attempts (47.1 per cent).

Up next for the Cascades women’s hoopsters is an exhibition tournament hosted by the Calgary Dinos next weekend. UFV faces the Alberta Pandas on Saturday (5 p.m. MT) and the host Dinos on Sunday (12 p.m. MT).

Women’s Soccer : Cougars rally in second half to tie Cascades

The University of the Fraser Valley women’s soccer team controlled the play for much of the night, but settled for a single point in a 1-1 draw with the Regina Cougars on Saturday at MRC Sports Complex.

The Cascades took a 1-0 lead on Brittney Zacharuk’s 30-yard strike in the 19th minute, and had number of chances to extend the lead but were held at bay. The Cougars took advantage, leveling the score on Daniela Castro’s goal off a set piece in the 63rd minute.

The Cascades (4-4-4) maintained fifth place in the Pacific Division, while the Cougars (0-6-6) picked up their Canada West-leading sixth tie of the campaign. They sit eighth in the Prairie Division.

“It’s frustrating,” Cascades head coach Rob Giesbrecht said afterward. “I thought we were good in a lot of ways, but it showed immaturity in not being ruthless in our attack, being content being ahead in the game. We should have learned that lesson last night (a 2-2 draw with Saskatchewan after leading 2-0), but unfortunately it’s taken us a while to learn some of these lessons.

Zacharuk opened the scoring on an outstanding strike – she caught Cougars keeper Ashton Lowry off her line and fired home a shot from distance. Janelle Henke picked up the assist.

UFV had many other dangerous forays – they outshot Regina 8-3 for the game, and had a 9-1 edge in corners, but were unable to find that final touch in the final third.

That left the door open for the Cougars, and they equalized on a free kick by Brooke Schlossarek that Castro headed inside the far post.

The Cascades put Regina under pressure immediately following the goal, but Lowry leaped to poke away Simi Lehal’s free kick which was headed for the top corner. Shortly thereafter, Lehal’s header off Zacharuk’s corner kick sailed over the bar.

UFV keeper Emily Harold came up big in the dying minutes to secure the point for her squad. On a counterattack in the 85th, Regina’s Kyra Vibert got a partial breakaway, but Harold came charging out and made the stop.

Harold and Castro were their teams’ respective game MVPs.

“It’s disappointing we couldn’t give them a win tonight, but they’re six special kids who have done a lot for our program,” Giesbrecht said. “We can’t thank them enough for all they’ve done.”

The University of the Fraser Valley men’s soccer team will host a Canada West regular-season game vs. the UNBC Timberwolves on Monday, Oct. 16.

Saturday’s scheduled game between the Cascades and T-Wolves in Prince George was postponed due to heavy snowfall. The rescheduled game will kick off at 2 p.m. at MRC Sports Complex, Field 4, and will be webcast at [CanadaWest.tv]CanadaWest.tv.

Be the first to comment on "UFV Sports Saturday – Cascades Hoops vs UVIC, Men’s Soccer Snow Date Up North"