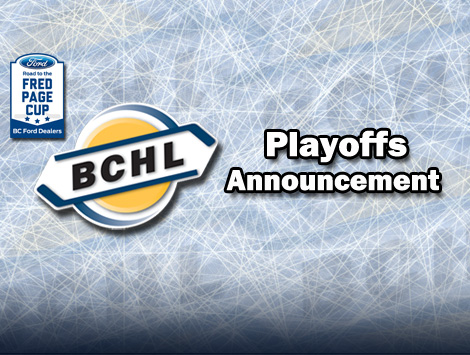 Chilliwack/BCHL – Following numerous meetings, conference calls and proposed scenarios, a Task Force Committee created in June 2017 by the BCHL Board of Governors has recommended a format for the 2018 BCHL playoffs.

The Board voted to keep the league’s the three-division alignment for the regular season, eliminate the first-round bye in the Interior Division playoffs and have 16 of the 17 teams make the playoffs.

The 2018 BC Ford Dealers Road to the Fred Page Cup BCHL Playoffs will adhere to the following structure:

Surrey Eagles On BCHL All Star Team – No Chiefs, Rivermen

Be the first to comment on "2018 BCHL Playoffs Structure"