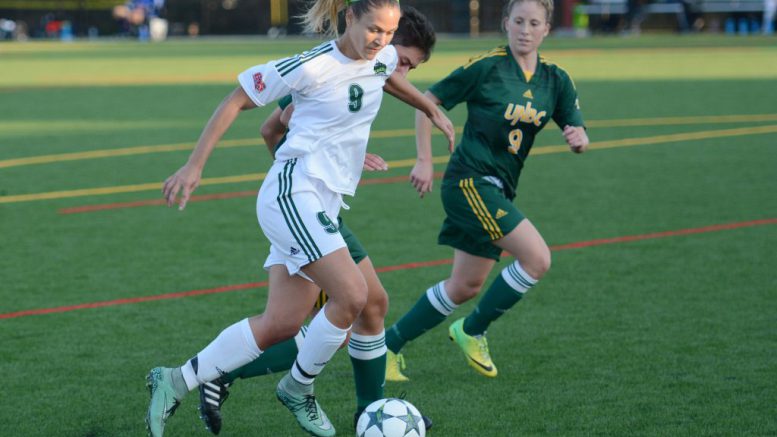 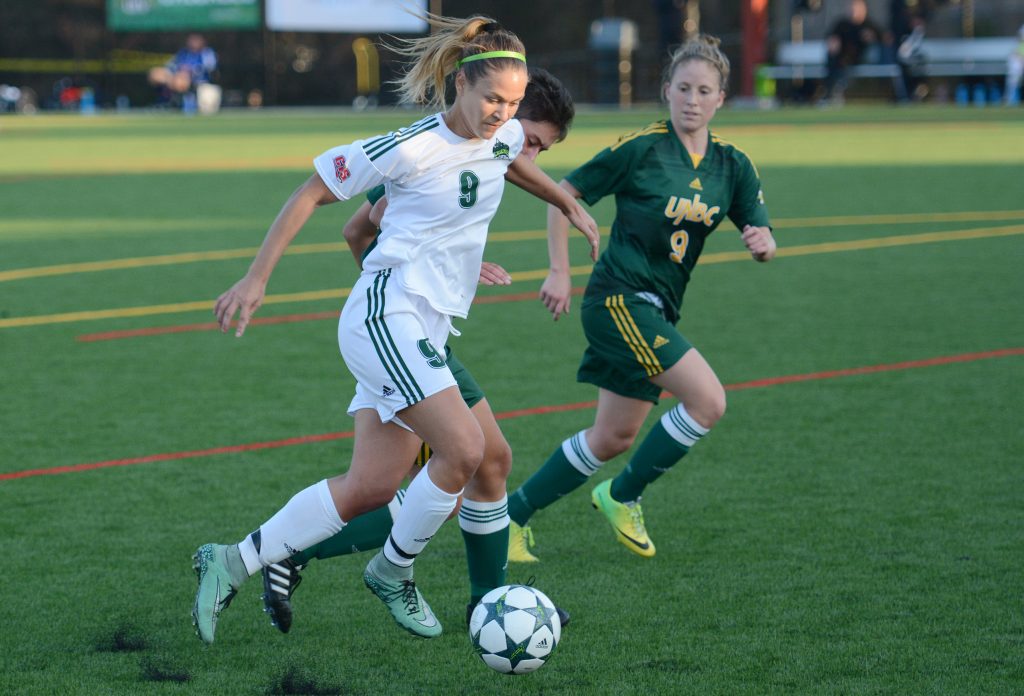 The University of the Fraser Valley women’s soccer program is pleased to introduce a second group of Class of 2017 recruits, headlined by blue-chip midfielder Janelle Henke.

Henke, who hails from Surrey, B.C., had originally committed to the NCAA Div. 1 Idaho Vandals, but a desire to play closer to home has led her to sign instead with the Cascades. She’ll be joined on UFV’s roster by four other B.C. standouts: Defender Kailyn Halvorson (Vernon), forward Meghan Rose (Chilliwack), midfielder Tripat Sandhu (Abbotsford) and goalkeeper Alyssa Smith (Langley).

Henke, Halvorson, Rose and Sandhu are eligible to suit up for the Cascades this fall, and Smith will be eligible in 2018 after transferring from Thompson Rivers University.

“These five student-athletes will add to the quality and depth of our team,” said Giesbrecht, whose squad has spent 13 weeks in the U SPORTS Top 10 national rankings since 2014. “Over the past three years, our program has been among the best in Canada. While we’ve graduated some key members of that core, we look at this entire 2017 class as vital building blocks of our future. To add a highly touted recruit like Janelle Henke late in the spring is rare, and we’re thrilled she’s coming.”

Henke is the Cascades’ fifth 2017 signee from Surrey United’s talented U18 team, joining Taylor Nekic, Mackenzie Toop, Sarah Parker and Katrina Frankenberger. Her youth soccer career was highlighted by a pair of national championship berths, and a BC Soccer Premier League title in 2013.

Giesbrecht believes Henke has the potential to be a strong contributor as a rookie.

“Janelle is a pacy attacking player – she’s very dangerous one v. one, and she can be very dangerous in a wide attacking role or centrally,” he said. “She plays with grit and determination as well. She was highly recruited throughout her youth soccer career, and we’re excited she’s decided to come to UFV and be a key part of our future.”

“I chose UFV because they not only have the program I am looking to study (criminology), but an amazing and supportive soccer program with a team that I’m very excited to join next year,” Henke said. “My goals for my time with the Cascades would be to become one of the starting 11 while improving my soccer skills, and working towards getting my degree to help me get into law school.”

Halvorson cracked the roster of Thompson Okanagan FC’s U18 team at the age of 16, and helped the squad to three consecutive third-place finishes at the provincial championships. She’ll study kinesiology at UFV.

“Kailyn is a quick, athletic defender,” Giesbrecht said. “She’s a player who improved dramatically throughout her last years of youth soccer, and we’re thrilled she’s decided to come to UFV to continue her progress as a player. We look forward to her adding pace and athleticism to our team.”

“I chose UFV for the exceptional academics and high-performance soccer program,” Halvorson said. “The coaching staff played a big part in why I chose UFV – I know I will be pushed to be the best player I can be. I grew up in Abbotsford and it feels like I’m coming home to pursue my soccer dreams.”

Rose won a provincial title with her U15 gold team in 2014, was the Sardis Falcons’ team MVP at the 2016 AAA high school provincials, and was MVP of the 2017 UBC tournament.

“Meghan is a hard-working forward with the potential to be an effective U SPORTS player,” Giesbrecht said. “She’s improved over the past year with Coquitlam Metro Ford, and we’re excited to add another local product with a bright future.”

Rose, who will pursue a kinesiology degree at UFV, said that proximity to home was a major factor in her decision to sign with the Cascades.

“The campuses are very nice, small class sizes, and the women’s soccer team is a strong team with good competition and it would be an excellent experience,” she said. “My goal for being with the Cascades would be to earn a spot on the starting 11, to grow as a player and become stronger.”

Sandhu is the first-ever UFV women’s soccer recruit out of Abbotsford’s Dasmesh Punjabi School. She earned a female athlete of the year award in 2015, and helped her club team to the Fraser Valley Soccer League finals earlier this year. She also excelled in basketball, and was awarded a 2017 Abbotsford Police Department scholarship.

“We’re thrilled to add another local product and another talented midfielder in Tripat,” Giesbrecht said. “She’s a very intelligent soccer player, and we look forward to seeing her develop into a proficient U SPORTS midfielder.”

“Born and raised in Abbotsford, I feel UFV was the logical choice for me,” said Sandhu, who will pursue a criminal justice degree. “The small class sizes, excellent academic and athletic opportunities, as well as the proximity to home, seem like a great combination for my post-secondary education. Likewise, being able to continue playing my favourite sport while pursuing my passion for criminal studies is a privilege.”

As a Thompson Rivers WolfPack rookie in 2016, Smith earned the first-string goalkeeper job and started 12 of the team’s 13 games. She backstopped the squad to its lone win of the season on Sept. 18 (2-1 over UNBC), and had an outstanding performance in a 3-0 loss to UFV on Sept. 25, turning aside six shots.

“Alyssa is a very good shot-stopping goalkeeper,” Giesbrecht said. “She impressed me in our game against Thompson Rivers this past season, and we’re thrilled she’s part of our future.”

“I decided to transfer to UFV because I am switching programs and UFV has a great social work program,” Smith explained. “My goals and dreams with the Cascades are to go to nationals before I graduate.”