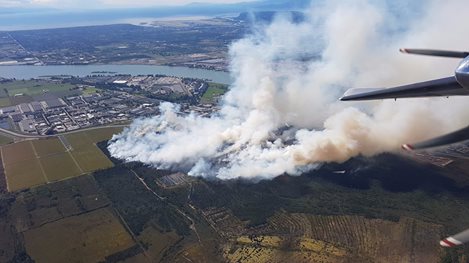 The Burns Bog fire is now 50% contained and all evacuations orders will be lifted this evening at 8PM.

Jackson says the power to the Tilbury area will be restored tonight. The air quality has stayed very similar to what it was this A-M.

The Southern Perimeter road between the 91 and the 99 will be closed for the next few days.

It could be 7 days until the Burns Bog fire is completely extinguished.

Here is the media release from the City of Delta:

The latest estimates show that the fire is approximately 78 hectares in size, with 40% of it being contained at the moment. The blaze has been categorized as a low smouldering 1st level fire with no new growth. It is also important to note that no fire retardants have reached any agricultural lands.

This type of low level fire has the potential to burn underground, but at this time we feel it has not yet penetrated the peat line. However, we are staying positive as the water mound is higher and the bog is in much better shape than during previous fires.

The evacuation of the Tilbury Industrial Area on Progress Way between 76 Street and 80 Street will be lifted at 8 pm tonight. Highway 17 remains closed between Highway 91 and Highway 99 and this is likely to last throughout the week. This is for the safety of our first responders and the public as this portion of the highway is a primary access point to fight the fire.

Delta staff have also worked with the Ministry of Transportation to adjust intersection light timing at Highways 91 and 17 (Tilbury Interchange) to allow for better movement of traffic.

Compared to yesterday, the visual smoke plume from the fire appears to be significantly reduced, but still very noticeable. Further Air Quality updates will be provided should the current situation change. The public can see current air quality data through Metro Vancouver’s AirMap: http://gis.metrovancouver.org/airmap

Mayor Jackson would like to take this opportunity to thank everyone that has tirelessly aided us during this emergency situation, including the businesses who have been very cooperative and understanding during this process. Without them it would not have been possible to make the steadfast headway we have made to date.

Delta staff have kept the Emergency Operations Centre open over night and it will continue to be fully functional until further notice.

At this moment, the Burns Bog fire appears to be 10% contained, however it does not appear to have grown over night. Our best estimates put the fire between 50-70 hectares in size.

Fire crews, totaling approximately 90 staff, will be tackling the fire today form both the north and south fronts. These efforts are designed to push the fire away from the Tilbury Industrial Area. Delta Fire has resumed normal operation of all their fire halls and are no longer receiving support from Surrey, New Westminster and Richmond. Firefighters from BC Wildfire Service and Metro Vancouver continue to assist and are concentrating their efforts on the fire within Burns Bog.

As of midnight last night, River Road and other roads in the Tilbury Industrial Area were reopened with the exception of Progress Way between 76 Street and 80 Street. Businesses in this area remain evacuated. Highway 17 remains closed between Highway 91 and Highway 99. This section of the highway is being used as an access route for the first responders and it is not anticipated to reopen today. The Fraser River is currently under normal operation and is open to marine traffic.

Smoke from the fire has been reported throughout the Metro Vancouver area. Conditions have improved, with some help from favourable weather conditions. Metro Vancouver is continuing to monitor the situation and is working closely with Delta and other agencies. The public can see current air quality data through Metro Vancouver’s AirMap: http://gis.metrovancouver.org/airmap

Once the fire has been fully extinguished and the last of the emergency first responders have withdrawn from the area, we will be requesting a debrief with Metro Vancouver’s Burns Bog Scientific Advisory Panel. We strongly believe that the best thing for Burns Bog is a fact based scientific approach to its recovery. As stewards of the Bog and leaders in its preservation we will do whatever necessary to ensure the best opportunity for the Bog’s recovery.

Further updates will be provided via our social media channels and Delta.ca

MONDAY 8 AM UPDATE – The Burns Bog fire is now somewhere between 50 and 70 hectares in size. Helicopters will be used today on the fire although it is not expected that water bombers will be in the air. Crews are hoping to contain the fire later Monday. No air quality advisory has been issued. The long range weather forecast is favorable – cloudy with showers for the next few days. This fire has the potential to burn for at least, the next week.

SUNDAY 11 PM UPDATE – Effective midnight tonight, the evacuation order in the Tilbury Industrial Area has been scaled down at the moment to the businesses on Progress Way between 76 to 80 Street. Access to these businesses will not be available until further notice. The evacuation order and road closures may change at any given time due to the unpredictable nature of the fire.

Delta Fire crews will be on fire-watch during the night and will continue to battle the fire in the morning with the continued support from BC Wildfire Service and Metro Vancouver fire crews, fighting it by land and air.