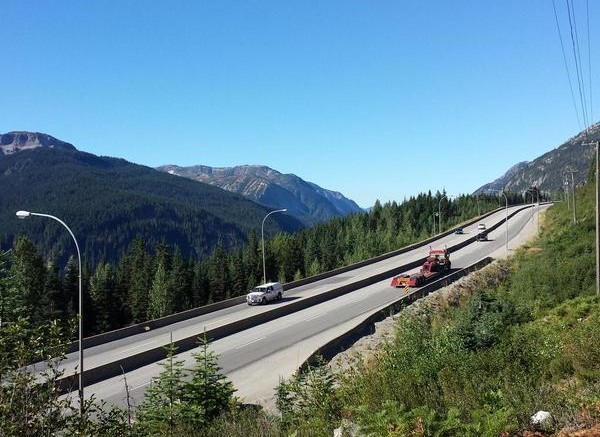 It was the most ambitious highway project in the province’s history.

It’s the most heavily travelled route in all of British Columbia.

From top to bottom, motorists can experience every single type of weather condition known to man. With a summit reaching 1,244 metres tall (imagine almost 3 CN Towers stacked up), it isn’t uncommon for it to be snowing at the peak and sunny at the base.

We’re talking, of course about the Coquihalla Highway.

The Coquihalla turns 30 (!) this year and to celebrate, we’ve collected images, videos and stories recounting the amazing tale of its construction and the impact this famous route has had on our lives.

Situated in southwestern BC, the Coquihalla (part of BC Highway 5) was completed in three phases. The first phase of construction, which officially opened on May 16, 1986, was the longest stretch at 120 kilometres. With the second and third phases, which linked Merritt to Kamloops and to Peachland respectively, overall travel time was significantly reduced, opening up a connection between major coastal communities and the interior of BC and providing a faster, safer alternative to the Trans-Canada Fraser Canyon route.

Design of the Coquihalla Highway began with exploration of the proposed route in 1973, followed by an official survey in 1979 when the first construction contract was let.

Accelerated design and construction began in the spring of 1984 in preparation for Expo 86 in Vancouver. To be sure the project was completed on time, more than 10,000 people were needed to fill all of the jobs.  More than 1,000 pieces of heavy equipment worked non-stop every day during the summer of 1985 to get it done!

The flat floor of the Boston Bar Creek valley was identified as a better route than following the Coquihalla River’s steep and narrow upper gorge; however this route also meant an increased risk from avalanches that had to be overcome. An incredible eight avalanche dams, 19 containment basins, two diversion trenches and three sets of avalanche benches were built in addition to the massive Great Bear Snowshed, to protect the highway. At 300 metres long, Great Bear is one of BC’s largest snow sheds, protecting the highway travellers from some of the province’s most active avalanche passes.

The Coquihalla Highway is also bridge engineer’s dream, with a bridge or overpass on average every 3,158 metres.

Green Ahead of its Time

The construction of the Coquihalla also included award-winning work to protect fauna and flora along the route. All environmental work was planned and performed under the supervision of environment and fishery experts. Construction of Dry Gulch Bridge on the Coquihalla Highway

Connecting Communities, Building the Future of BC

When the Coquihalla opened, it wasn’t just a faster route to the interior of the province; it also became a vital link between the community of Merritt and the rest of the province. For years leading up to the opening of the Coq, the community of Merritt had been lobbying the province to build a new route through the Coquihalla Pass to Hope, which was accessible only by cattle trails. Today Merritt is a vibrant and growing community, an important hub between the coast and the interior of the province. The City of Kamloops and the Okanagan have also experienced a tremendous amount of growth and change since the Phase 2 and 3 of the Coquihalla were completed, evolving into the bustling metropolitan hubs we know them as today.

The Coquihalla corridor also plays a vital role in our Pacific Gateway strategy by supporting the fast and efficient movement of goods between BC, the rest of Canada and the rest of the world. Coquihalla, Phase 1 by the Numbers

Stay tuned as we shared more stories, images and videos celebrating the Coquihalla. If you have a question or comment about this or any of the other work we do, let us know in the comments below.