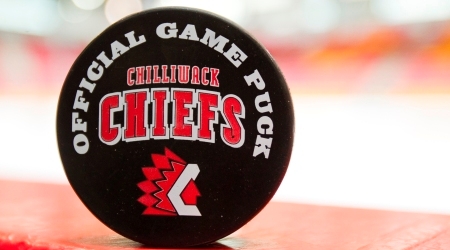 Nanaimo – The Chiefs evened their third round record at 1-1 with a 4-1 win over the Nanaimo Clippers in Nanaimo Saturday night. The Clippers and West Kelowna Rockets are also at 1-1 with the next game scheduled being Nanaimo at Chilliwack Monday night. Game time is 7pm.

After a scoreless first period the Chiefs took a 2-0 lead early in the second on goals by Jake Smith (4) and Kale Kane (5). The goals were scored 63 seconds apart with Kane’s coming on the power play.

A defensive zone turnover by the Chiefs lead to the league’s leading playoff scorer Sheldon Rempal with the puck all alone in front of Pelino. Rempal made no mistake flipping the puck high and past Pelino for his eighth goal and 20th point of the post season.

That was as close as the Clippers would come.

Jordan Kawaguchi’s seventh goal of the playoffs at the 6:20 mark of the third period put the Chiefs back up by two.

With just over nine minutes left in the final period and the Clippers set to go on the power play, Rempal was called for unsportsmanlike conduct for a slash on Olivier Arseneau, canceling the man advantage.

Darien Craighead’s goal with 61 seconds left into an empty net rounded out the scoring.