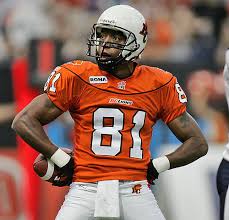 Vancouver– BC Lions VP of football operations, GM and head coach Wally Buono announced today that former Lions head coach and CFL Hall of Famer Bob O’Billovich along with former CFL offensive coordinator Bill Diedrick have been added as scouts while Geroy Simon has been named the club’s director of CIS scouting and player personnel assistant.

Both Neil McEvoy, the team’s director of football operations and player personnel, as well as Ryan Rigmaiden, the Lions’ director of U.S. scouting will continue to serve in their current capacities.
“Bob and Bill bring a vast amount of CFL experience and knowledge to their roles and they understand the kind of players who are best suited for our game, while Geroy’s work will be invaluable to our success,” said Buono. “Adding more expertise to our player personnel department well help us in both the short and long term and I’m looking forward to seeing our organization benefit from their contributions.”
Today’s announcement marks a return to the club for O’Billovich who was the Lions’ Director of Player Personnel under Buono from 2003 to 2007 before joining the Hamilton Tiger-Cats as GM in 2008. Also serving as Lions head coach for 43 games from 1990-1992, O’Billovich will scout CIS players in Ontario and Quebec and attend eastern-based NFL training camps.
Diedrick, who will focus his scouting efforts in California and the southwest United States returns to work in the CFL after serving as quarterbacks and receivers coach for the Toronto Argonauts in 2008 and in a similar capacity for the Calgary Stampeders in from 2005 to 2007. The veteran coach began his CFL days with the Edmonton Eskimos in 1991 before moving onto NCAA postings at Washington, Stanford and Notre Dame.
Simon, the CFL’s all-time leader in receiving yards and receptions will now focus his energies specifically on the evaluation of Canadian football talent in advance of this year’s CFL Draft which is slated for Tuesday, May 10, as well as during the CIS regular season.
The Lions have also added Michael Lionello, to the coaching staff in charge of quality control. Lionello joins the club after serving at Simon Fraser in a number of areas including director of football operations, recruiting coordinator, running backs coach and video coordinator.
SHARE TWEET PIN SHARE

Be the first to comment on "Geroy Simon, Coach O-B New Scouts For BC Lions"