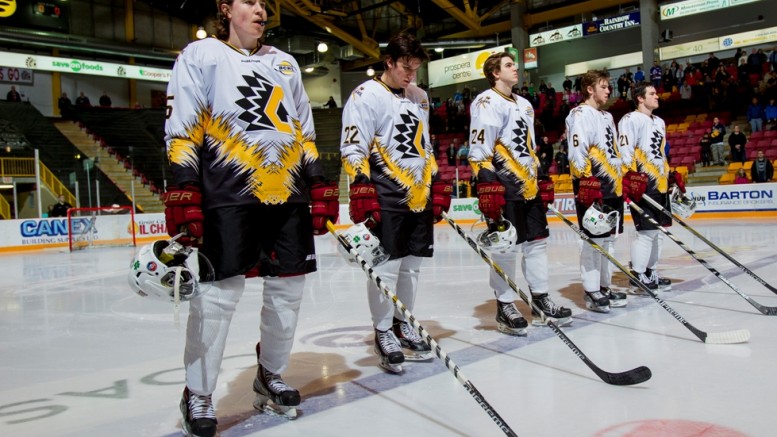 Chilliwack, BC  – For the second time in a week the Chilliwack Chiefs laid a beating on the Coquitlam Express.

After whalloping them 6-3 last Saturday, the Chiefs did even better Friday night at Prospera Centre, pummeling their Mainland division foes 9-4.

Chilliwack got a hat-trick from Jordan Kawaguchi and two goals from Kale Kane.

The Chiefs generously spotted the Express a two goal lead before this game was five minutes old, with Coquitlam scoring on their first two shots.

Erik Udahl opend the scoring at 3:03, finishing off a nice three-way passing play with Cameron Bertsch and Taylor Green. On the next shift, Jack Surowiec flew down the left wing and blew a short-side shot past Chilliwack netminder Matteo Esposito.

But the rest of the first period was pure dominance by the home team.
Coquitlam had just two more shots while the Chiefs pumped 25 at Express goalie Tyger Howat. Kawaguchi got Chilliwack even, scoring two goals in 105 seconds.

Gooch started the first play with a centering pass from the right wing wall. Kohen Olischefski punched the puck on net and the captain swooped in for the rebound, popping it upstairs for his 15th of the season.

Moments later Austin Adam one-timed a Dennis Cholowski pass on net. Cruising through the goal-mouth, Kawaguchi tucked the rebound inside the left post.

Defenceman Zach Giuttari collected his first BCHL goal at 14:02 when his point shot deflected off Taylor Green and in.

Kane wrapped up the first period scoring, one timing a Vimal Sukumaran feed past Howat for his seventh.

The Chiefs added another just 53 seconds into period two, with guess who pulling the trigger.

Off a neutral zone turnover and a quick pass from Adam, Kawaguchi darted down the right wing and put a blocker-side shot past Howat.

That ended the goalie’s night, with backup Lawson Fenton coming into the game.

The Express got one back on a power play at 4:05, with Owen Stout pulling the trigger, but the Chiefs answered back with goals by Kane and Sukumaran to lead 7-3 through 40 minutes.

Darien Craighead got in on the action at 7:25 of period three, sniping his 10th of the year, and Sukumaran almost got his second of the game moments later. On the penalty kill, No. 11 stripped Coquitlam’s Charlie Barrow of the puck at the Chilliwack blueline and had a clear path to the net. Sukumaran went to the forehand, but Fenton butterflied, getting his left leg down to make the stop.

A Jake Smith snipe at 11:51 put a little drama into the last eight minutes.

But after Coquitlam’s Colton Kerfoot wrapped up the scoring at 15:08, Kane provided a suitable exclamation point, one-punching Coquitlam’s Mathew Michie to the ice in a fight that was even more one-sided than the game.

The Chiefs are back in action Saturday night hosting the Nanaimo Clippers in a 7:30 p.m. start.

Chiefs Drop A Close One On The Road In Coquitlam

Be the first to comment on "Chiefs Shut Down Express, Big Time"