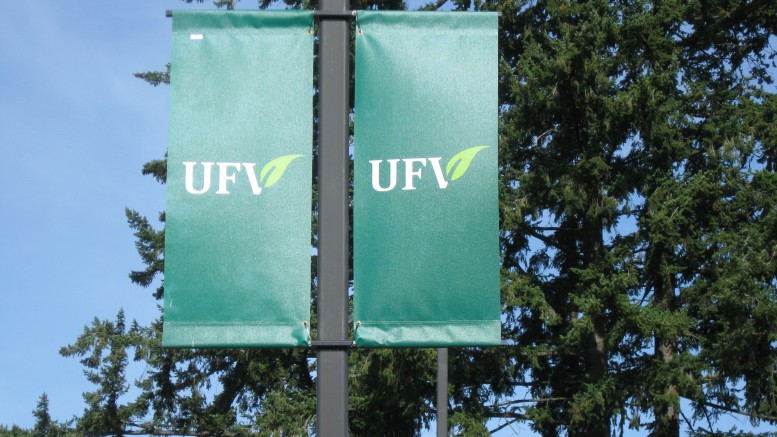 The University of the Fraser Valley men’s basketball team fended off a furious fourth-quarter comeback by the UNBC Timberwolves to earn a weekend split in Prince George.

The Cascades led by 16 points when Vijay Dhillon drilled a three-pointer with the shot clock winding down in the final minute of the third quarter, giving his squad a 59-43 lead.

But the T-Wolves scored 27 points in the final frame and clawed almost all the way back, cutting the deficit to 70-69 after Billy Cheng hit a trey with two minutes remaining in regulation.

After both teams came up empty on their next possessions, Cascades fifth-year guard Kevon Parchment restored order, converting on a gritty drive to the hoop in transition. Dhillon made two free throws to make it 74-69.

But UNBC kept pushing. Rhys Elliott hit a three-pointer to make it 74-72, and after a layup attempt by Cascades centre Nav Bains rimmed out in the dying seconds, the T-Wolves raced down and Elliott hoisted a potential game-winning triple, but it missed at the buzzer.

UFV, coming off an 81-74 loss to UNBC on Friday – its first defeat of the Canada West regular season – improved to 5-1 in conference play. The Cascades are tied for first in the Explorer Division with the Thompson Rivers WolfPack, while UNBC (2-4) is tied for fourth.

“It’s a tough place to play, and when they get on a roll, that place starts to get loud,” noted Cascades head coach Adam Friesen, whose team led 22-10 after the first quarter and maintained a double-digit lead for much of the evening. “They really got rolling (in the fourth quarter), and we didn’t do a great job of slowing them down once that happened.

“We needed everyone tonight. Kevon made some huge plays, and that bucket he scored after they closed to one point, was probably the game. We didn’t play our best basketball, but a lot of guys stepped up.”

Dhillon paced the Cascades with 20 points, while Parchment, as is his custom, authored a well-rounded stat line with 16 points, six assists and six rebounds.

The Cascades also got great mileage out of their post players – Matt Cooley (12 points, 11 rebounds) and Bains (11 points, 11 rebounds) both posted double-doubles, a “great sign” according to Friesen. Point guard Manny Dulay chipped in with 10 points as all five UFV starters scored in double figures.

UNBC’s Elliott racked up a game-high 24 points on 11-of-15 shooting from the field, while Cheng scored 14 and Colin Plumb had 13 points and 10 boards.

The Cascades’ performance on the glass was crucial to their success on Saturday – they outrebounded UNBC 37-27.

The University of the Fraser Valley women’s basketball team raced out to a 27-point lead on Saturday evening, en route to a 78-67 road win over the UNBC Timberwolves.

Canada West scoring leader Kayli Sartori had another big night for the Cascades, racking up 23 points on an efficient 9-of-15 shooting performance from the floor. It was her third outing of 20-plus points in the past four games, and she added eight rebounds, four assists and three steals – all team-high totals.

Fifth-year guard Shayna Cameron went 4-for-7 from beyond the arc on her way to 14 points, and the Cascades’ rookie starters Taylor Claggett (17 points, six rebounds) and Kate Head (a career-high 10 points, 2-for-2 from the three-point line, six rebounds) also excelled as UFV improved to 4-2 on the season.

UNBC point guard Maria Mongomo replied with a game-high 29 points, but she couldn’t prevent her team from suffering its sixth straight loss to begin the Canada West regular season.

“This morning I watched some video, and I saw that we were standing around too much on offence last night,” Cascades head coach Al Tuchscherer said, referring to his team’s 80-68 win over UNBC on Friday.

“We really turned that around tonight. We moved the ball, found the open man. It was great basketball to watch.”

The Cascades built a 22-13 lead at the end of the first quarter on Saturday, only to watch the host T-Wolves open the second on a 10-2 run to close to within 24-23. But UFV regained control behind its two precocious rookies – Claggett and Head combined to score the next nine points, sparking a 21-4 run to end the first half. The Cascades took a 45-27 cushion into the locker room.

It was more of the same in the third quarter, and the Cascades’ lead peaked at 27 points early in the fourth.

With UFV’s starters on the bench for the vast majority of the final frame, the T-Wolves made a late push, but the deficit was too large to overcome.

“I thought it was a great performance for our team,” Tuchscherer summarized. “We came out with a lot of energy and played fantastic basketball for a lot of the game, which enabled us to get a lot of our girls into the game (in the fourth quarter), which was super-valuable to us.”

Sartori pushed her conference-leading scoring average back up to an even 20 points per game.

“Kayli is leading us in a lot of different ways,” Tuchscherer said. “She’s a calming influence on our team, and it’s nice for us to know she’s a tough match-up for other teams.”

Men’s Volleyball: Cascades bounce back with straight-sets win over Avalanche

A colossal comeback in the second set paved the way for an impressive road victory for the University of the Fraser Valley men’s volleyball team on Saturday afternoon.

Taking on the College of the Rockies Avalanche in Cranbrook, the Cascades took the first set 25-21, but struggled early in the second and fell behind 19-11. They mustered an epic rally, though, to edge the Avalanche 25-23, and wrapped up the match with a tidy 25-17 victory in the third.

The CCAA No. 14-ranked Cascades, coming off a four-set loss to COTR on Friday, evened their record at 5-5. The Avalanche, likewise, find themselves at the .500 mark at 4-4.

“We did our jobs tonight,” UFV head coach Kyle Donen said. “We made adjustments, but for the most part we were just more disciplined and played pretty consistent from start to finish.”

The Cascades got typically strong performances from their offensive leaders, right side Joel Kleingeltink and left side Adam Chaplin – the latter making some great plays as a setter in some rotations. Rookie middle Connor Prium came up big at the net in his second straight start, while Robert Bauerfind and Levi Block came off the bench in the second set to spark the rally.

“It’s a big win for us,” Donen said. “It’s not an easy trip. We would have preferred to win both nights, but overall, happy with how we responded tonight.”

The Cascades volleyball teams wrap up their first-semester schedules at home next weekend, taking on the Capilano Blues at the Envision Athletic Centre. On Friday, the women play at 6 p.m. and the men at 8 p.m., and Saturday’s games start at 5 p.m. (women) and 7 p.m. (men).

The University of the Fraser Valley women’s volleyball team dropped a five-set decision to the College of the Rockies by the slimmest of margins on Saturday afternoon.

The Cascades had won the opener of the weekend series in Cranbrook in four sets on Friday, and in the rematch, the two teams alternated set victories – the Avalanche winning the first and third sets, UFV taking the second and fourth.

In the fifth, with the score tied 6-6, COTR reeled off four straight points to take control. The Cascades battled back, drawing to within 14-13, but Avalanche outside hitter Mackenzie Morey squeezed the ball through the UFV block for the winning point.

The Cascades now sit fifth in the PacWest conference at 3-7, while the Avalanche are 2-6.

“The difference today was, we made more errors,” Cascades head coach Mike Gilray said. “We were trying to do too much with some balls.

“They’re a very good team, so you’re going to have to earn points defensively and keep balls alive.”

Second-year outside hitter Rachel Funk earned player of the game honours for the Cascades, her effort highlighted by a pair of key kills late in the fourth set to boost her squad to a 25-23 win and extend the match. Fellow outside hitter Kelly Robertson, coming off a terrific 13-kill, 16-dig performance on Friday, was very good again on Saturday.

“For the two of them to be our players of the game this weekend was good, because we’ve had our middles leading us,” Gilray noted.

The Cascades volleyball teams wrap up their first-semester schedules at home next weekend, taking on the Capilano Blues at the Envision Athletic Centre. On Friday, the women play at 6 p.m. and the men at 8 p.m., and Saturday’s games start at 5 p.m. (women) and 7 p.m. (men).