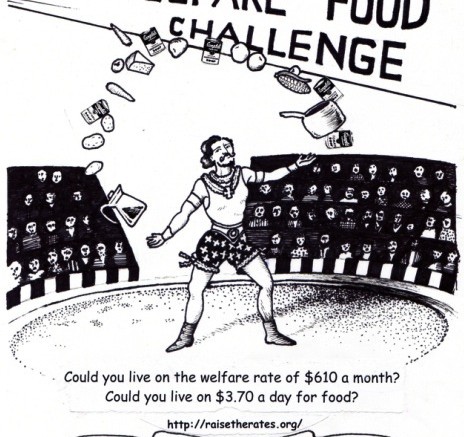 Fraser Valley/Vancouver – “I Feel Like A Number” – Bob Seger

During the week of November 3 to 9th, two high profile people are going to do what over 170,000 people on welfare do every week, not have enough money for food.

Back on October 27, the Raise the Rates Coalition announced their 4th annual Welfare Food Challenge at the Aboriginal Front Door in Vancouver. Singer Bif Naked is taking the challenge for the second time and new Member of Parliament for Vancouver East, Jenny Kwan, is taking it for the first time. Both women say they will spend that week eating only what food they can buy for $21.

So far, FVN has not heard of any high profile politician or entertainer in the Fraser Valley that will be taking this challenge. If you are, let us know radiodon11@gmail.com .

“I’m doing it because nothing has changed,” said Bif at a news conference held to launch the Challenge. “Last year a big part of my motivation was people like Fraser (Stuart) and Harold (Lavender). This is real. It is not just about eating. It’s about having hope.”

“When you wake up every day and the only thing you have on your mind is what can I eat, there’s no justification for it,” said Fraser Stuart at the news conference. Fraser said he had been on welfare for about 3 years and it provided enough money to get through about a week and a half, not a full month.
Derek Gent of Vancity Community Foundation also spoke at the news conference about his experience of doing the challenge with his family last year. “In many ways it was tantamount to child abuse of my children,” he said, adding that he had become “a fervent advocate of higher welfare rates.”

Harold Lavender, who has been on disability for 8 years, the same length of time that rates have been frozen, said that it is getting harder and harder to get by. “You have to ensure that people have enough money to get by,” he said.

“I wish every politician in the province would try this,” said Fraser Doke, who has been on disability with numerous health issues.

“I urge Premier Christy Clark to listen to people in the community about what their lives are like when they have only $21 for food,” said Jenny Kwan, who is also taking the Challenge. “At the end of one week my life resumes to where I have adequate food. I also have proper housing. We can end poverty. We can end people living on the streets.”

FVN’s Managing Editor and News Director, Don Lehn has been on Welfare three times. “All three occasions were from circumstance and not because I did not want to work. It was from the fact that I could not find work. The last two times, I was faced with age discrimination. When you are over 45, you are in a no-man’s land. You know too much and therefore perceived that you cost too much. Welfare is truly a demoralizing exercise. To quite a Bob Seger Song “I Feel Like A Number”, You are not a person, you are a file and treated as a burden on the system, even though you passionately want to work and be self-supporting. Yes there are those who abuse the system but for the most part, especially in this current economy, those who bitch about people on welfare are generally those who have never been through the meat grinder, and that really p****** me off. They don’t know what they are talking about.”

Raise the Rates holds the Welfare Food Challenge to raise awareness about the inadequacy of welfare rates and pressure the provincial government to raise welfare rates substantially.

Note on SRO rent:
The City of Vancouver found that the average rent of an SRO is now $450 a month. This contrasts with the Provincial government’s shelter allowance portion of welfare of $375 a month.

(Reference: City of Vancouver, Report from General Manager of Planning and Development Services, Feb 24, 2014 to Council, page 4 of Appendix I (page 312 of 320 pages)

BC Budget – Cuts To MSP Premiums, Money For Housing and New Addictions Ministry