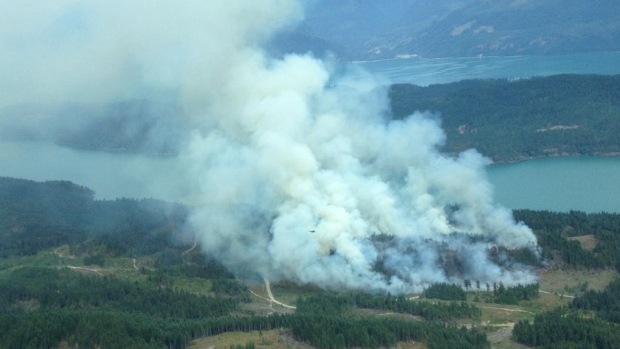 Harrison Lake (With Files from Global/Vancity Buzz/News1130) – The Woodlake Wildfire burning 20 km north of the community of Harrison Hot Springs has grown to 600 hectares in the span of two days.

Initially, the Coastal Fire Centre said the fire was 200 hectares on August 3, but smoke and strong winds made estimates difficult.

The fire is moving northward away from the community of Harrison, but campers in the area have been evacuated and the Sts’ailes Forest Service Road has been blocked off.

Donna MacPherson with the Coastal Fire Centre told Vancity Buzz  that the fire is believed to be human caused.

“It is an area that people do enjoy to go to, so it’s unfortunate that this human-caused fire has caused this kind of damage to the area.”

She said firefighting efforts are mostly contained to the south end to prevent it from getting closer to the community of Harrison.

Right now there are 135 firefighters on the ground, as well as nine helicopters and two air tankers battling the blaze. It is zero per cent contained.

Meanwhile the Martin Mars Water Craft, which was called in to fight the fire, was out of service on Monday and Tuesday for general engine service.