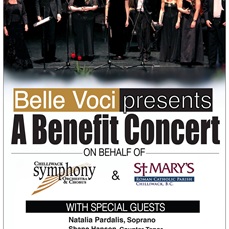 Chilliwack BC – The Chilliwack Symphony Orchestra & Chorus love the community of Chilliwack and they want to give back.  Community outreach initiatives are already undertaken in various ways by the CSO and there is a need to maintain their existence.  Similarly, St. Mary’s Parish has various supports in place directed towards needs in our city.

Belle Voci, an integral part of the Chilliwack Symphony Orchestra, is joining together with the Yarrow String Quartet, local counter-tenor Shane Hanson and soprano Natalia Pardalis on Friday June 12, 2015 to present an evening of mostly sacred music.  Together, they are planning a benefit concert in order to raise funds for both St Mary’s Parish as well as the CSO.

The Yarrow String Quartet is comprised of four students from the Yarrow community – Finn and Bea Longhurst, and Nicholas and William Voth. They have performed for the Fraser Valley Regional Library’s production of Peter and the Wolf, as well as at the Chilliwack Lions Music and Dance Festival, where they received gold awards and performed at the Honours Performance in 2014.  They also played at the Kiwanis Fraser Valley International Music Festival in Langley, where they again received gold awards, as well as the Junior String Ensemble Medallions for two consecutive years. Recently, they were nominated by the Kiwanis Fraser Valley Festival and competed at the 2015 Performing Arts BC Provincial Festival, May 26-30, in Powell River.

When Natalia Pardalis discovered the CSO was putting on a benefit concert, she jumped on board, offering up two pieces.  Natalia’s mother once taught her, “No musical mistake is a mistake, but rather a journey to create beautiful music.” The singer, songwriter, pianist, and musical educator has emerged from the cocoon of the classical world to reach diverse audiences with her unique sound. Her debut album Life, released in December of 2011, is full of soul-tinged songs that are set to resonate with all who hear them. Anchored together by her incredible voice and impressive piano skills, Natalia takes listeners on a personal exploration of her life throughout the past 10 years. As well as graduating from several musical training programmes in both performance and arts education, Natalia completed her Bachelor of Performing Arts degree (Capilano University, Douglas College, Langara College and Vancouver Community College) – the first of its kind in Canada.

Strike By Coke Cola Production Workers In Chilliwack, Lower Mainland Is Over

Be the first to comment on "CSO Belle Voci Benefit Concert"