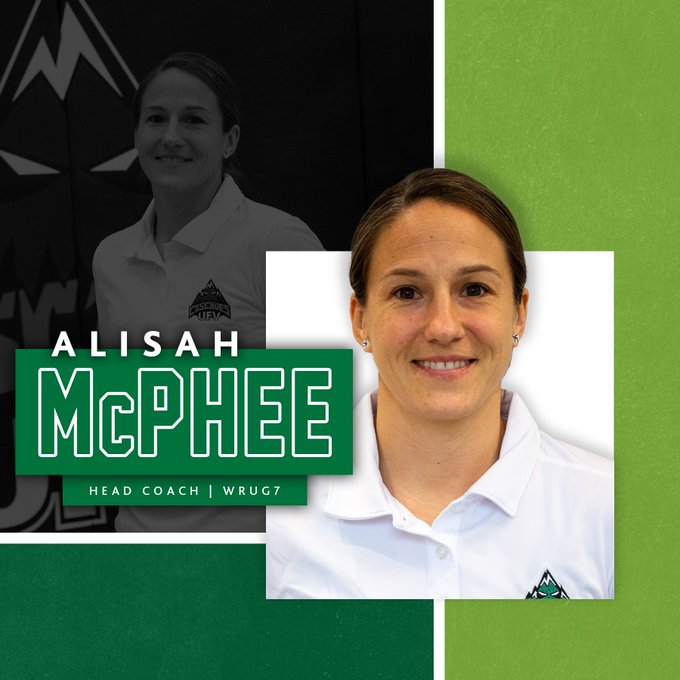 Fraser Valley (Dan Kinvig) – The University of the Fraser Valley department of athletics and campus recreation is pleased to introduce Alisah McPhee as the new head coach of the Cascades women’s rugby sevens club.

McPhee takes over for Jen Ross, the club’s founding head coach, who earlier this fall moved to Victoria, B.C. to pursue a new professional opportunity in the non-rugby realm.

“It’s great to have Alisah on board,” stated Steve Tuckwood, UFV director of athletics and campus recreation. “She has big shoes to fill with Jen’s departure, but we believe she’s up to the task and has a lot of passion to continue growing the women’s rugby sevens club. We look forward to working with her as we get closer to the rugby sevens season.

“We’re also deeply thankful for Jen Ross’s work in establishing and nurturing the program over her five seasons. Her contributions to growing women’s rugby in the Fraser Valley are unparalleled, and we know she will continue to be a vital presence in the sport on Vancouver Island.”

McPhee grew up in Williams Lake, B.C., where she was part of the town’s first girls rugby team and played the sport in high school. She went on to star on the soccer pitch at North Vancouver’s Capilano University, winning two CCAA national championships and earning national championship MVP honours in 2000.

McPhee has been a teacher in the Abbotsford school district for the past 11 years, and currently teaches at Eugene Reimer Middle School. She has coached rugby in Abbotsford for 13 years, both at the school level and the regional rep level. She’s coached Fraser Valley youth teams to podium finishes at the Provincial Regional Championships (PRC’s), winning gold at the U14 level in 2017 and 2019, and silver at the U16 level in 2016.

“I appreciate what Jen has established, and I want to continue to grow the program,” McPhee said. “I want it to be something that the Fraser Valley can embrace – ‘This is our team!’

“For me, a lot of it is getting our student-athletes out into the community, whether it’s through fundraisers or camps that we’re doing, and letting people know we have a team here. And for me specifically, that’s recruiting. The Fraser Valley is heavily recruited by teams that are well-established already. I want to get into the high schools here, but I also want to create opportunities for Northern communities which have rugby clubs, but their schools may not have teams. Being from a small town, I know there’s skill up there, but not a lot of opportunity to be seen.

“We have a lot of individuals with skill in the program. It’s about putting a team together that’s cohesive, challenging them as individuals to really create the environment of team, and putting 100 per cent commitment in.”

The Cascades women’s rugby sevens club was founded in the fall of 2016 with Ross as head coach, in conjunction with the launch of the Canada West Women’s Rugby Sevens Series which played its inaugural season in the spring of 2017.

Ross has a long-term coaching connection to McPhee, having invited her to get involved with the Fraser Valley squads for the PRC’s.

“Alisah has a great way with athletes, and she’s dedicated,” Ross said. “When she signs up for something, she puts her whole heart into it, and that’s what the program needs. She has the girls’ best interests at heart, and she has great vision for the program.

“She’s certainly put in her time and is dedicated to the craft of coaching. She has a really good approach toward female sport and scholastic sport, for sure.”

Ross has already found a home in the coaching community in Victoria – she’s currently working with the James Bay Athletic Association’s U19 women’s team, with the goal of eventually establishing a senior women’s team at the club.

As she reflected on her time with the Cascades, she extended thanks to the athletic department for its support of her vision for the women’s rugby sevens program over the years.

“It was certainly a challenge from Day 1, getting community buy-in and getting the financial pieces in place to start the program,” Ross noted. “And we haven’t even begun to reach the potential of what this program can be. There’s unfinished business, but it would have been a lot harder to leave if there weren’t good people involved.

“I’m so proud of all the athletes who have contributed to the Cascades – I’ve gotten to work with a really great group of women, and I know that being part of a university program meant a lot to them. It became a family, and that’s what I wanted to establish – something that would enhance their university experience.”