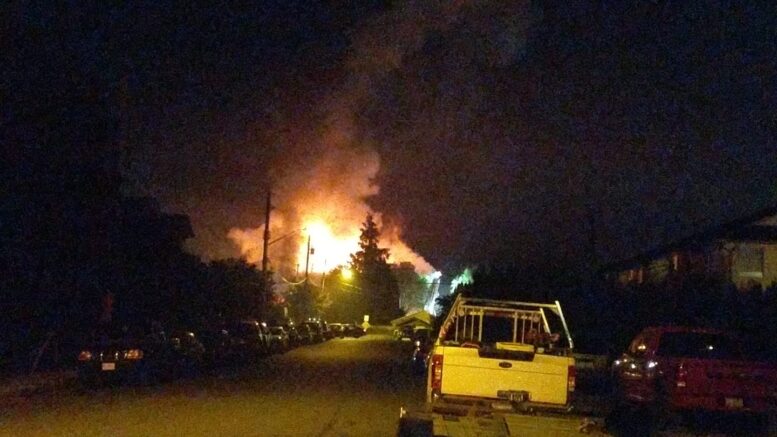 Investigation into the cause of last Thursday’s fire in the 9200 block of Hazel Street, Chilliwack has ruled out any criminal involvement.  The RCMP has concluded its investigation.

“Our thoughts continue to be with all of those affected by this fire.  Many people lost their homes and one individual lost his life.  It is such a tragedy,” says Sgt. Krista Vrolyk, Media Relations Officer for the Chilliwack RCMP.    “Our community is incredibly thankful and indebted to the members of the Chilliwack Fire Department whose quick action and bravery resulted in saving many lives and preventing further tragedy last week.  We’d also like to recognize the many generous members of our community who have shown support to the people displaced by this fire.”

There are a number of injuries. One person has died. from jumping from a balcony. That was confirmed by Chilliwack Assn’t Fire Chief Andy Brown. Two firefighters were treated for smoke inhalation.

Brown noted: in a media release:

0120 hours the Chilliwack Fire Department was dispatched to multiple reports of an apartment complex fire in the 9200 block of Hazel St. 50 firefighters responded from Halls 1, 2, 3, 4, 5 and 6, upon arrival fire crews encountered heavy fire and black smoke venting through the roof of two apartments at the rear of the structure, and multiple occupants trapped on their balconies.

The smell of smoke filled the downtown air.

A Facebook page Hazelwood Manor Fire Victims has also been set up.

Residents are being put up at the Chilliwack Coliseum for the time being.

The cause of the fire is under investigation.