All Signs Point to Dangerous Avalanche Conditions This Weekend, for BC’s Coastal Mountains 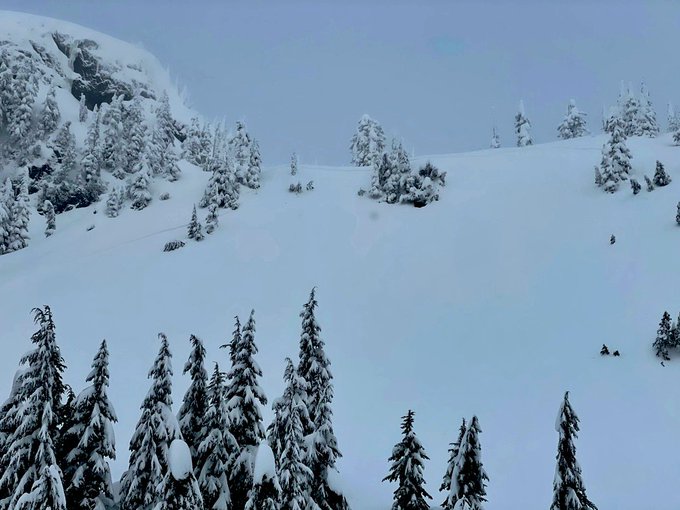 Revelstoke/Fraser Valley – Looking ahead to this weekend, particularly on Sunday, February 21, all signs point to dangerous avalanche conditions for BC’s coastal mountains. If you’re planning a trip into the backcountry during this time, please lower your expectations, select safe, lower angled terrain not exposed to avalanche paths from above and watch for worsening conditions as the storm progresses.

During the extended dry period we’re just coming out of, cold temperatures promoted facet growth near the surface of the snowpack. There have also been reports of surface hoar growth, including this one from the North Shore and this one from near Shames. These weakly-bonded crystals are now being buried by new snow generating a weak layer in the snowpack.

Towards the end of this week and through the weekend, storm snow amounts will build with successive snowfalls before reaching a crescendo on Sunday. On Sunday, it looks like we’ll see a triple whammy of weather inputs: significant amounts of new snow, rising temperatures and wind. All adding further to the building weight of snow sitting on the weak layer.

Higher snow areas, such as (but not limited to) the North Shore mountains of Vancouver, western sections of the Sea-to-Sky, the Coquihalla, Shames near Terrace, and areas near Kittimat will almost certainly see natural avalanche cycles. While the danger in these areas should appear fairly obvious, users should still factor in the influence of the weak layer, which will make avalanches very easy to trigger and is likely to increase how far they run and how wide they propagate. Unless you have professional-level avalanche training, this could be a time to stick to the safety of in-bounds ski areas or ride sleds on groomed trails and meadows.

A final concern: there’s a small but real chance of a step-down to a deeper persistent weak layer in some areas – predominately close to the US border and/or in lower snowpack zones. A release like this could cause a very large avalanche. The most likely place for something like this to occur are areas such as the east side of the Duffey, Allison Pass and possibly the Chilcotins (although we have very little info to confirm this last suspicion).

Once again, the key to staying safe is to stick to simple, low angled terrain that is not threatened by avalanches from above. Save steeper lines and bigger objectives for times when conditions are significantly better than they are right now.