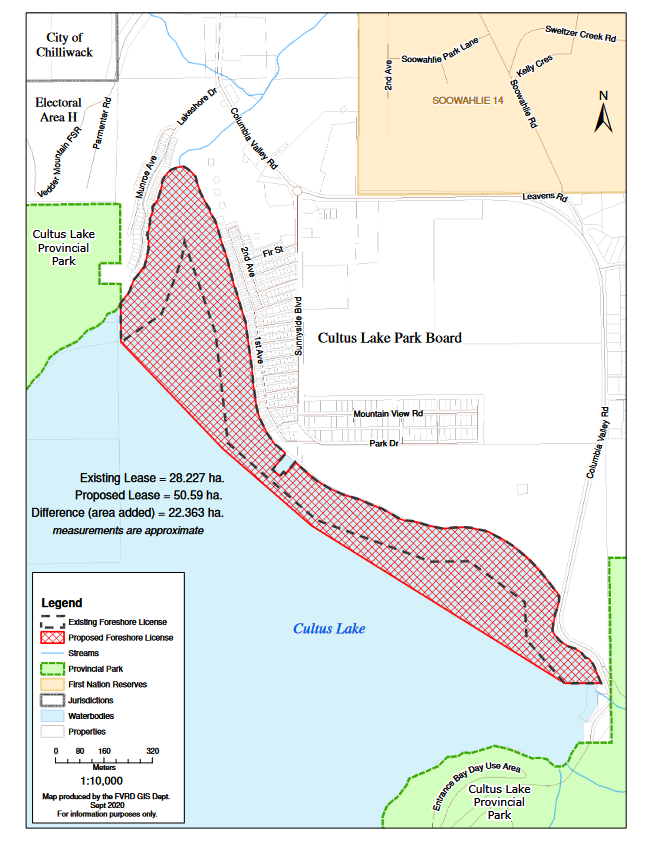 Cultus Lake – The Cultus Lake Park Board has applied to the Provincial Government to expand the area covered by the foreshore lease. This foreshore lease allows the Board the authority to control things like docks, buoys, swim lines, etc.

All submissions need to be received by January 6 2020.

If approved, the new lease would basically cover the area from the southern tip of Sunnyside Campground, straight across to the west side of the Lake a bit south of the most southerly house on Lakeshore Drive.

Details can be viewed at the following website:https://comment.nrs.gov.bc.ca/applications…

This website gives details of the Board’s lease application and also advises that if anyone is interested in commenting on the lease application (before the Province decides to approve or deny it) – any comments must be submitted no later than January 9, 2021

The Cultus Lake Park Board (CLPB) submitted a Land Act Lease application to convert the existing foreshore institutional lease for the purpose of managing public facilities and controlling the construction of boathouses, wharves and other water improvement (File 0096779), located along the north edge of Cultus Lake, BC (Cultus Lake Park), into a new commercial lease.
Further, CLPB has requested to modify the boundaries of the foreshore lease area to add the sliver of water area (approximately 22.78 ha) for better management of the existing buoys, docks and swim lines.
The existing improvements within the current lease comprise:
• 42 wharves;
• 4 boat lifts;
• 209 buoys;
• Swim lines; and,
• 2 boat launches: one at the end of Sunnyside Blvd, and the other within Sunnyside Campground.
CLPB wishes to reconstruct one of the existing wharves used for the Main Beach Boat Rentals business, as it is at the end of its life span.
CLPB would provide public access without interference to the Cultus Lake in the Main Beach area where several public parking lots are available and in the Sunnyside Campground area, while restricting public access to the foreshore in the residential areas due to an increase in criminal activity (i.e. break-ins and theft).