Canada West (and UFV) Plan for 2020 Golf Championships to Proceed 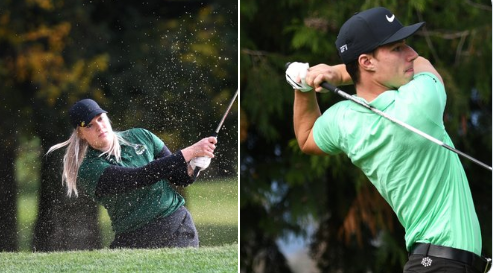 Fraser Valley (Dan Kinvig/Evan Daum, Canada West) The University of the Fraser Valley men’s and women’s golf teams are poised for conference competition this fall, as Canada West (CW) announced Wednesday that plans to stage the CW golf championships in October will proceed.

The decision was made Wednesday via a vote of all 17 CW members, following recommendations from the conference’s Board of Directors, which were informed by the CW COVID-19 Task Force.

Whether the championships are ultimately staged is contingent on health and safety considerations across Western Canada, as British Columbia, Alberta, Saskatchewan, and Manitoba continue to manage COVID-19 in their respective provinces.

The CW Golf Championships, hosted by UBC Okanagan in Kelowna, B.C., are scheduled for the Okanagan Golf Club, Oct. 2-4.

With Wednesday’s announcement, the Cascades men’s and women’s golf programs are poised to be the only UFV varsity teams to participate in conference play this fall. Beyond the CW championships, there is a chance that the Cascades could also tee off in additional invitational tournaments against other B.C. universities.

Canada West had previously announced on June 8 that all first term team sports – soccer, football, field hockey, and rugby 15s – wouldn’t proceed, and that all two-term sports – basketball, volleyball, and hockey – would start no sooner than January 2021 with reduced schedules. A decision on the commencement of two-term sports and second term championship sports – including wrestling – will be made no later than Oct. 8. Of the sports listed, UFV competes in soccer, basketball, volleyball and wrestling.

Golf has weathered the COVID-19 pandemic better than most sports, as an outdoor activity where physical distancing is relatively easy to maintain. Golf courses have been able to remain open in B.C. during the pandemic, with modifications.

Additionally, CW announced Wednesday that plans to host the conference swimming championships at the University of Calgary will also move forward, albeit in 2021 (dates TBA). The swim championships had originally been scheduled for November 2020. It was also decided that the CW cross country championships, scheduled to be hosted by the University of Saskatchewan, will not be staged this season. The COVID-19 Task Force felt that the necessary risk mitigations – reduction of team complement, altered start, creating defined passing areas, or hosting regional championships (one B.C., one Prairie) – would too significantly impact the integrity of the championships. UFV does not compete in swimming or cross country running.

“I’d like to thank our COVID-19 Task Force along with the scheduled hosts of our fall championship sports for the work that went into informing today’s vote,” said CW President Clint Hamilton. “While we are disappointed that cross country champions won’t be crowned this fall, we will proceed optimistically with plans for the CW Golf Championships and remain hopeful for delivering swimming in the second term.”