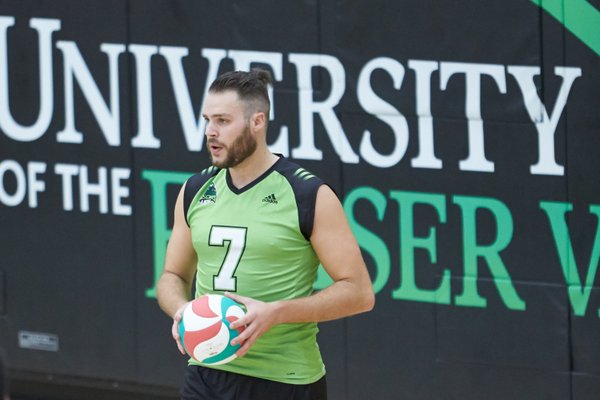 Women’s Volleyball: Cascades’ depth shines through in win over Bearcats

The University of the Fraser Valley women’s volleyball team wrapped up an opening-weekend sweep, topping the Columbia Bible College Bearcats in three straight sets for the second night in a row.

On the heels of Friday’s straight-sets triumph at UFV, the Cascades repeated the feat across town at Columbia Place, winning by scores of 25-16, 25-17 and 25-18.

The Cascades’ depth was apparent on this night, as head coach Janelle Rozema leaned on different lineup combos in the rematch. Third-year middle Lauren Poirier stepped into the starting lineup, and outside hitter Ashley Huberts, libero Karissa Marazzi and setter Sarah Brownlee were also significant contributors as UFV improved to 2-0 in PACWEST play.

“It was really great to have a different combination out there today, and to have them execute just as well,” UFV head coach Janelle Rozema said. “It shows we have a lot of options as a team.”

The Cascades were clicking offensively from the get-go, with Poirier and Amanda Matsui connecting for early kills. A four-point service run by Matsui helped UFV build an 11-4 lead, and they cruised from there to take the first set.

The Cascades took control of the second set in the middle stages, and continued that momentum into the third, wrapping up the win on a Poirier service ace.

UFV hit a scorching .468 on the night, with Matsui leading the way with 14 kills and Poirier chipping in with five.

“A lot better than last night,” said Rozema, alluding to the Cascades’ slow start on Friday. “The girls had a look in their eyes from the start tonight – they felt so confident, and they looked a lot more natural out there. I think we kind of normalized a bit more tonight, so that was exciting to see.

“We started strong, but we also we kept the momentum for the whole game. Our strong, focused execution was really consistent tonight. I think it was a really mature and focused performance.”

The Cascades volleyball teams are back in action on the road next weekend, taking on the Vancouver Island University Mariners in Nanaimo in a Friday-Saturday set.

The University of the Fraser Valley men’s volleyball team managed a massive comeback on Saturday evening, battling back from a two-set deficit to edge the Columbia Bible College Bearcats in five.

The Cascades, coming off a three-set triumph over the Bearcats at home on Friday, struggled early in the rematch at Columbia Place, dropping the first two sets by scores of 25-21 and 30-28. But they clawed their way back into it, winning the next three 25-21, 27-25 and 16-14 to seal the weekend sweep.

“They showed some grit, they showed some heart,” UFV head coach Nathan Bennett said of his players afterward. “That was something they struggled with in the first two sets – they didn’t look overly engaged. But they turned it around, which does show character. That’s a nice win for how we played. We battled hard, and it wasn’t easy. We’ll take the two points.”

The Bearcats, energized by their home crowd, won the first set and seized full control of the match by outlasting the Cascades in an epic second set. Facing a 24-22 deficit, UFV staved off two set points on kills by Jackson Obst and Caleb Kastelein. CBC, though, managed to survive a trio of subsequent set points for UFV and eventually earned the 30-28 triumph.

The Cascades stuck with it, and pulled out a win in the third set behind a pair of clutch aces from Ian Jagersma in the late going.

The fourth went down to the wire, but Landon Uy came up huge for UFV, hammering down four kills in the late stages to seal a 27-25 win and send the match to a fifth set.

The Cascades built a 9-6 lead in the fifth, only to watch the Bearcats reel off four straight points for a 10-9 advantage. UFV again dug deep, with key offensive plays from Uy, Obst and Kastelein, and Justin Peleshytyk would eventually close out the match with an ace.

“The start was tough, but when things don’t come easy, we have to learn how to find rhythm,” Bennett said. “That starts with breathing, understanding your job, and making sure you’re executing it.

“When the frustration climbs like it was in the first two sets, we started doing things out of character. But in the last two sets specifically, I thought we calmed our breath and we were doing our jobs and executing at a higher level.”

The Cascades volleyball teams are back in action on the road next weekend, facing the Vancouver Island University Mariners in a Friday-Saturday set.