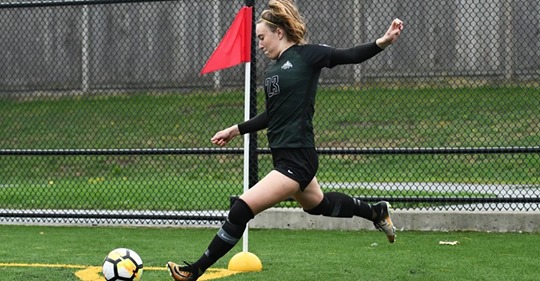 The University of the Fraser Valley women’s soccer team dropped a 3-0 decision to the Calgary Dinos on the road Friday afternoon.

The Dinos, ranked No. 6 in the U SPORTS national poll, got a pair of goals from Sienna Prince-McPherson and one from Taylor Dangerfield to improve to 7-0-2 while dropping the Cascades to 2-3-4 in Canada West play.

The UFV squad continues its road trip Sunday as they visit Prince George for a date with the UNBC Timberwolves (12 p.m., CanadaWest.tv).

“This result is tough to take, because for us to get to where we want to get to, we have to get results on the road and it’s not easy,” Cascades head coach Rob Giesbrecht said.

“This game showed the importance of doing little things right – hunting down loose balls, winning first and second battles. That’s one thing that was glaring today, and those are things that we’re usually very good at.”

Dangerfield opened the scoring in the 21st minute – the Cascades repelled the Dinos’ initial foray off a free kick, but Calgary reclaimed possession and scored in the second phase, with Amy Mikusa picking up the assist.

The Cascades found some traction as the half wore on, with Tavia Jasper generating a couple of solid chances, but Prince-McPherson struck in the 45th minute to give the hosts a 2-0 lead heading into the locker room.

Prince-McPherson netted her second of the match in the 74th, intercepting a ball from Cascades goalkeeper Andrea Perkovic and firing it home.