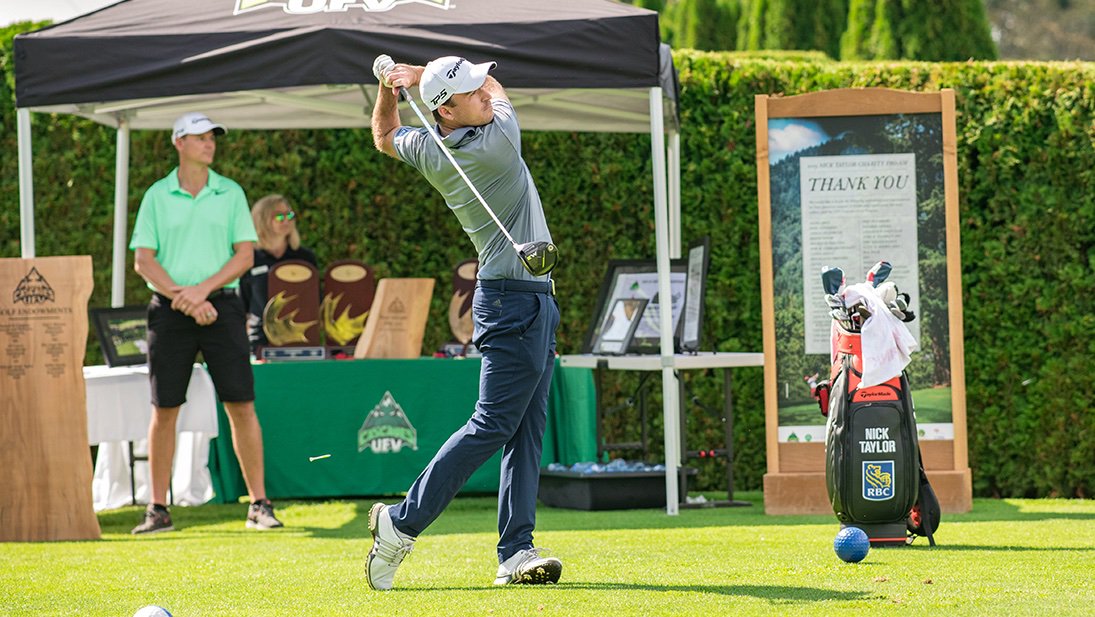 Abbotsford – The third annual Nick Taylor Charity Pro-Am was a smashing success, both on the golf course and off.

The tournament, co-hosted by PGA Tour golfer Taylor and the UFV Cascades golf program and presented by Algra Bros. Developments, ran Thursday afternoon at Ledgeview Golf Club in Abbotsford. Taylor won his namesake tourney, shooting a round of 64 that Cascades head coach Chris Bertram termed “the easiest 64 I’ve ever seen in my life.”

More importantly, the event once again raised thousands of dollars for a number of great causes.

Final fundraising totals have yet to be tabulated, but proceeds from Wednesday evening’s gala will go to a pair of local charities selected by Taylor and wife Andie: Chilliwack Community Services and 27Blue, an Abbotsford-based foundation which supports youth mental health. Proceeds from the golf tourney will go to support the Cascades golf program.

“It was a lot of fun,” Taylor said after Thursday’s festivities had wrapped up. “The weather cooperated this year, which was a huge bonus, especially on Wednesday (for the gala). The turnout was incredible, and we did really well again (fundraising), which is exciting.”

Bertram termed it the “best ever” edition of the Taylor/Cascades/Algra event.

“Wednesday’s gala was a wonderful celebration of community,” he said. “One of our core values as a program is to be responsible citizens and to give back, and we share those core values with Nick and Algra Bros. Developments.

“And of course, today was a perfect day for golf – wonderful weather, the golf course was amazing, and great camaraderie. I had a front-row seat to a pretty simple-looking 64 today from Nick. It’s always fun to watch him play – the amateurs in his group were awestruck and I think had a once-in-a-lifetime experience.”

Taylor won his eponymous event for the second time in three years, and third time overall dating back to when it was known as the UFV Cascades Pro-Am. Other luminaries to have won the tournament include Adam Hadwin (2011, with a tourney-record 62) and James Lepp (2012).

“The greens were as fast as I’ve seen them in a while, so that was fun,” Taylor said with a smile. “It took me back to my junior days – I have a vision in my head of how fast the greens were when I was growing up, and it was fun to kind of have that back today.

“I had a lot of opportunities but didn’t really make a lot of putts – I had some downhill putts that were so fast, you had to be pretty defensive. It was a lot of fun . . . it’s a pretty cool trophy to put your name on.”