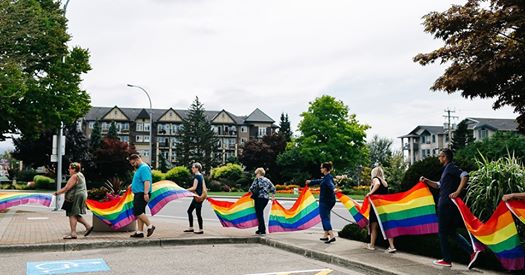 Chilliwack – While rainbow crosswalks have been put into place at Eagle Landing and the Promontory Save On Foods (both on First Nations land), it appears a similar crosswalk won’t be put into place on Mill Street (Downtown).

City Council, in their upcoming Tuesday agenda prior to the vote stated:

The City of Chilliwack has several hundred painted crosswalks to assist pedestrians crossing busier roads and intersections. Historically, all crosswalks have been maintained in a consistent manner with the primary purpose of assisting pedestrians to cross streets and roads. The Crosswalk Decoration Policy was implemented in 2017 to ensure those crosswalks remain consistent in appearance and continue to serve as safety devices for pedestrians.Recently, the City has received a petition to install a rainbow crosswalk. Council has been asked to consider this request . RECOMMENDATION: That Council, deny with regret, the request to install a rainbow crosswalk in accordance with Policy Directive J-ll – “Crosswalk Decoration Guidelines”.

A Facebook page for pro-crosswalk supporters has been set up and they are asked to be respectful and peaceful, and show up wearing solid colours. Rainbow Flags will be handed out.

Amber Price has been a vocal activist in favour of the crosswalk and posted to Facebook: Please join us at City Hall at 3pm this Tuesday to show your support.

Despite presenting a binder of support and letters from almost 800 citizens, we have not been given space on the agenda to speak, and council will be voting without any public conversation.

The decision to not inform our group of it being an agenda item, or allow us the opportunity for public discourse with our elected officials is gravely concerning.

The staff report posits that Policy Directive J-11 prohibits the creation of a rainbow crosswalk because it is political in nature. If the City of Chilliwack considers symbolically recognizing that all of our citizens are equal to be political, that does not reflect well on our values. In addition, using a policy that was only recently implemented (as a way to block rainbow crosswalk applications) as an excuse to stand against equality would be the wrong thing to do. You can get rid of Policy J-11 with a simple vote. The report also claims that what is an inclusive symbol for some can be divisive for others. The only people who are offended by rainbow crosswalks are those who do not accept that LGBTQ people are full and equal members of our society. Please don’t give into intolerance in the name of false balance.

The other main argument against the rainbow crosswalk in the report is that it would be unsafe. This is ridiculous. Unless we are assuming that Chilliwackians are somehow less intelligent, have poorer eyesight and are worse drivers than residents of other cities, this excuse to reject the rainbow crosswalk should be dismissed outright. Cities all over the province have these crosswalks, and there have been no safety concerns whatsoever.

I urge you all to stand up for what is right and show the rest of British Columbia that we are a thriving, modern city that accepts everyone.

P.S. This letter represents my personal views and is not meant to represent the position of the Chilliwack Board of Education.