Mission Man – 5,000th Person in BC Alive Today Because Of An Organ Transplant 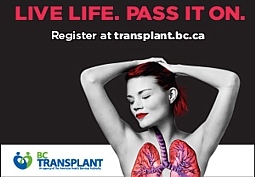 Mission/Maple Ridge – A 31-year-old Mission man is grateful for another chance at life after receiving a kidney transplant last month from a living donor, making him the 5,000th person in British Columbia alive today because of an organ transplant.

“The success of organ transplant is a transformative feat of expertise, coordination and caring through the province, in every health authority,” said Adrian Dix, Minister of Health. “Even though we have 28 % of British Columbians registered in the Organ Donor Registry, we still have over 700 British Columbians waiting for an organ transplant. In 2018, 27 people died waiting. We need more people to register, to help save those who are waiting.”

Geoffrey Dunsire received a kidney from Debi Pearce, a 64-year-old realtor from Maple Ridge, who decided to step forward as a potential donor after meeting Dunsire and his family while finding them a new home. This was Dunsire’s second organ transplant. He received an initial liver transplant six years ago at Vancouver General Hospital but was so ill his kidney was damaged as well. Dunsire had been on dialysis for four years before his kidney transplant last month. Both Dunsire and Pearce are recovering well.

“There are literally no words to express how grateful I am to Debi for giving me the ‘gift of life’,” said Dunsire. “Thanks to her, I am ready to believe and hope for my future.”

“Donating a kidney has changed my life in so many ways,” said Pearce, the kidney donor. “I feel empowered, positive and so grateful to be able to help give Geoff back his ‘normal’ life again.”

Today’s 5,000th transplant milestone is a testament to the experience, knowledge and expertise of all of the health professionals who are involved in organ donation and transplant, and the dedication of British Columbians who choose to donate.

For more information on becoming a donor and helping save lives, visit: www.transplant.bc.ca

This milestone comes as BC Transplant celebrates 50 years of organ donation and transplant and demonstrates how far patient care has advanced in this province. Today’s announcement was made possible by the thousands of living and deceased donors and their families who have chosen to give the gift of life.

The Provincial Organ Donor Registry was created to legally record a person’s decision regarding organ donation. The information in the registry can be accessed by BC Transplant at the time donation is considered.

Organ donation is considered only after all lifesaving efforts have been exhausted and it is certain that a person will not survive. Donor registration record is confidential, and only accessible by the donation team at BC Transplant.