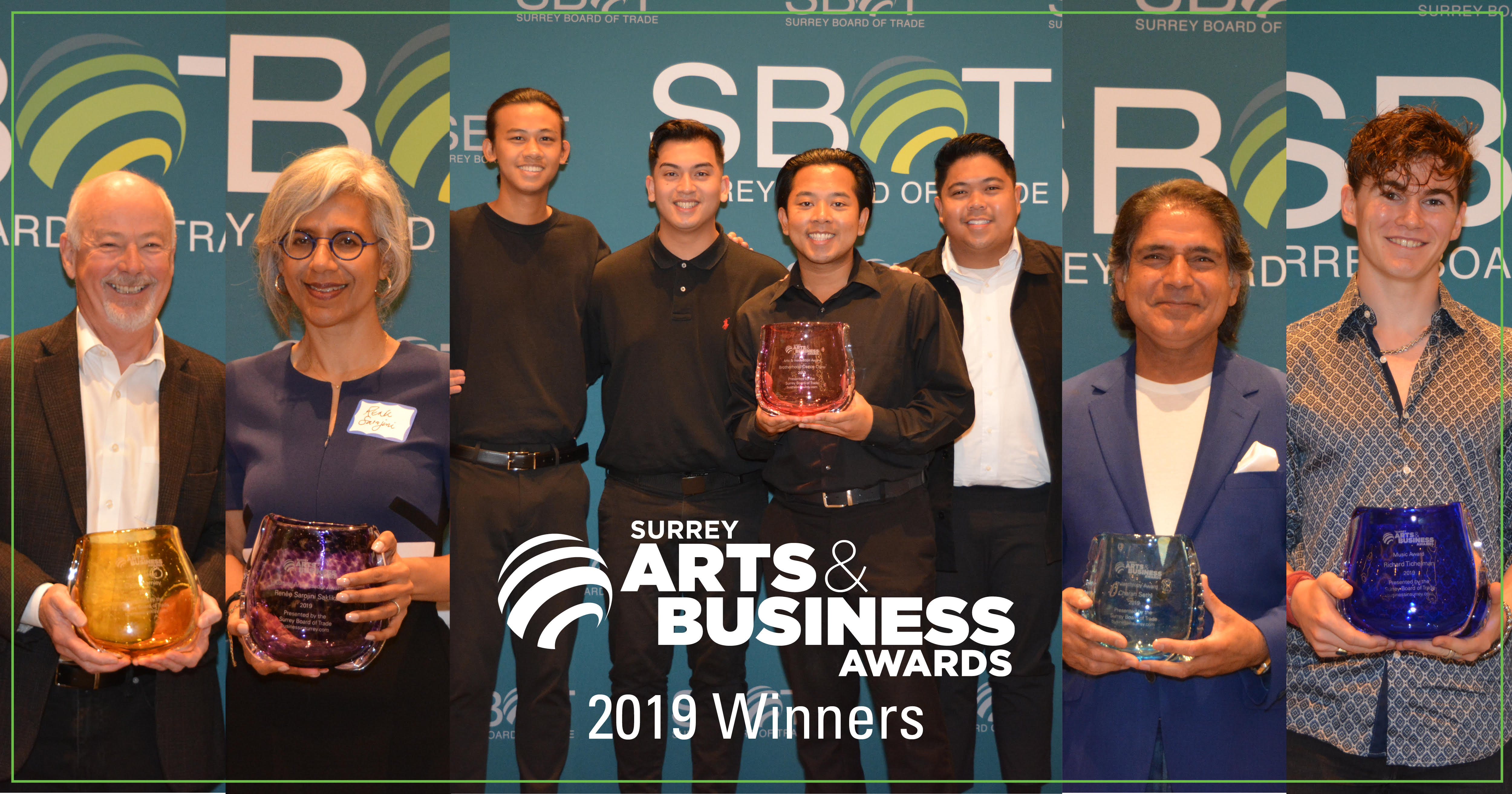 Surrey – The Surrey Board of Trade announced the winners of the 3rd Surrey Arts & Business Awards on June 14. The event drew Surrey’s business community, artists and BC’s Minister of Tourism, Arts and Culture, Lisa Beare, to celebrate Surrey’s creative industry.

“We need arts & culture to be a priority because it enhances the city’s livability – making it a part of the economic development paradigm.”

The Surrey Board of Trade proudly presented the following awards:

Founded by Scott Forsyth in the basement of a Surrey church in 2011, Brotherhood is a

15-member all-male hip hop group, incorporating storytelling in their performances, known for being one of the most entertaining and synchronized dance crews in the world. 11 of Brotherhood’s 15 dancers call Surrey home. Brotherhood performs and competes internationally, winning numerous dance titles. For example, they won first-place at the Vibe Dance Competition in Costa Mesa, California. Brotherhood was featured on NBC’s World of Dance Season 2. They say that dance is a tricky sport/art; it’s subjective and is judged based on the opinion of others. Their philosophy is: “Don’t take yourself too seriously and never let the opinions of others determine your self-worth. Just keep creating, inspiring, and remember your purpose.”

Renee’s role as the first Poet Laureate from 2015-2018 was significant because it built support and awareness to the literary arts in Surrey. She continues to inspire and nurture young writers through her work as the 2019 Surrey English Teachers’ Association (SETA) Writer-in-Residence, offering workshops to teens at high schools throughout Surrey. Renée demonstrates her passion for connecting people of all ages and backgrounds through poetry. She mentors diverse writers and writing groups including the Cedar Bark Poets in Newton Grove. In addition, she mentors residents at the Surrey Pretrial Services Centre, helping to break down barriers to bring people together to share in the joys of storytelling and writing.

Charan Sethi and the Tien Sher Group of Companies have been strong supporters of Surrey, particularly in Whalley. Through his efforts, in partnership with others, Whalley was recognized and created as a historic district. His support of the Flamingo Square Arts Initiative and its integration of supporting live music has been instrumental in making Surrey a music city. Charan is a leader in his support of arts, music, theatre, education and cultural experiences by building spaces that enhance the cultural livability in Surrey.

Chris is a talented artist and musician dedicated to the growth and appreciation of Surrey’s creative industry. Not only did he make Surrey home to his creative agency for almost 39 years, he has also spent countless hours volunteering his time on community boards and sharing his musical talent throughout Surrey. He may have retired from the 9am-5pm agency life in 2018, but he has no plans to stop contributing to the arts in Surrey. In fact, he has spent even more time supporting arts and music over the past year. He works closely with the Surrey Food Bank, Surrey Libraries and the Surrey Arts Centre including their ‘Stand Up for the Arts’ campaign. His art (in various forms) has supported business and non-profit organizations, helping Surrey as a whole grow as a creative destination.

Richard has been actively pursuing a music career since the age of 14. From the Roxy Night Club to the Surrey Children’s Festival, he has been hand selecting his covers and originals. For over 5 years, Richard has won awards, received scholarships and travelled across Canada and the USA to perform. He received the Don Welden Memorial Award at the Calgary Stampede. Richard has been accepted in the CBC Searchlight Competition, released two EPs which included 7 new songs on Spotify and iTunes, and recorded 3 new songs in Los Angeles with producers ‘The Trackheads’.

Evaluation of the nominees was based on: