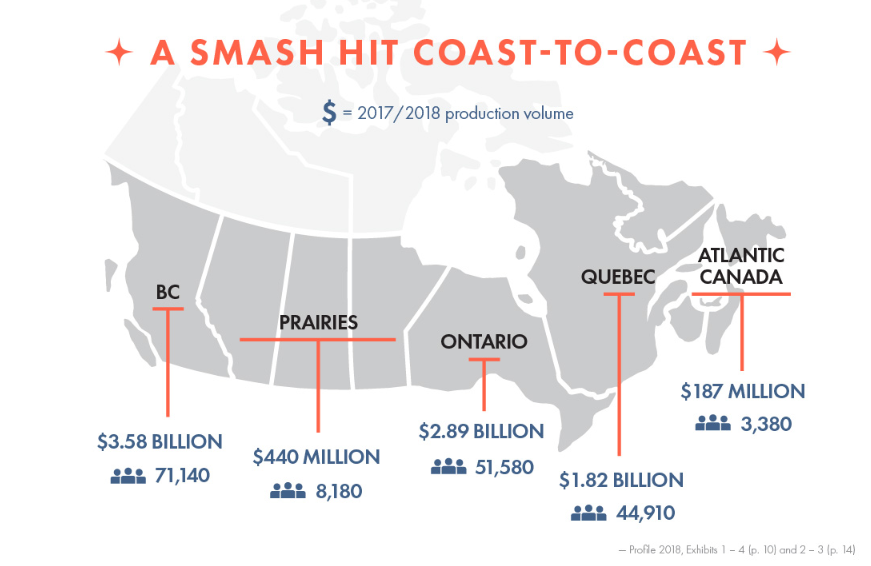 Ottawa – Canada’s media production industry continues to be a powerful economic engine for the nation’s economy, according to a report released today by the CMPA. Topline numbers from Profile 2018: Economic Report on the Screen-Based Media Production Industry in Canada reveal the sector continued to grow in 2017/18, setting a new high-water mark of $8.92 billion in production volume, and generating record-level job creation (179,000 FTEs) and GDP ($12.77 billion).

In 2017-2018 BC once again, led the way in Production Revenue. For the Fraser Valley, that included many MOW or Made for TV Movies for specialty channels Hallmark and Lifetime Channels. Recently CBS film their pilot for the series “The Republic of Sarah”.

Traditional TV shows are taking a back seat to special effects and animation that is done in BC. Also chipping away at the traditional providers are Netflix, Amazon, Google and Apple , all with on line TV platforms.

In addition there has been a decline in the commissioning and financing of Canadian television productions through private broadcaster licence fees. Year-over-year these fees dropped by 17 per cent, from $434 million to $360 million. And over the last five years, private broadcaster licence fees have dropped by nearly 40 per cent ($231 million), from a high of $591 million in 2013/14.

“It’s no secret that ‘cord-cutting’ and shifts in audience viewing habits are upending the system,” said Reynolds Mastin, President and CEO, CMPA . “Taken together, these numbers reinforce our support of the federal government’s current Broadcasting and Telecommunications Legislative Review, and with the hope that all players who benefit from our industry also invest in its continued success.”