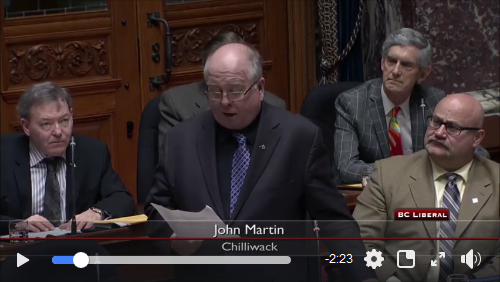 Surrey/Chilliwack – Plenty of finger pointing and political dancing after it was made public that Surrey Memorial Hospital discharged two patients in February and sent them to Chilliwack. It appears that there was no where in Surrey to place these two, One was in a wheelchair and the other was a women in her mid-70’s with incontinence and hygiene problems and needed the use of a walker.

This past week, Chilliwack Mayor Ken Popove made it clear to Fraser Health that this was not acceptable for the patients let alone the current challenges for local homeless shelters and in particular, the Salvation Army.

This concern made its way to the Legislature, as Chilliwack MLA John Martin brought up the issue during question period.

Watch the video as Health Minister Adrian Dix, inferred that Surrey had no room, but was cautious about why both people ended up in the Wack.

Kloot then posted to Facebook – While all communities struggle with the challenges of homelessness, Chilliwack continues to push above its weight, and while I am appreciative of the recent funding for our city by the provincial government, this practice needs to stop immediately. This is completely unacceptable. Full stop. Unacceptable. Wrong on every level. How is this even in the best interest of the client moving them 80 km away from their friends, community and family? We stand ready to meet immediately with the Minister of Health and Fraser Health to have this serious situation addressed. Thank you MLA Martin for bringing this forward.

I urge everyone disturbed by this to email the minister of health or call his office.

When one reads between the lines, and the reaction of Fraser Health’s comments to Mayor Popove about investigating the concerns, there seems to be an information breakdown and they “are looking into the specific concerns.”

There have been plenty of rumours flying, since the 2010 Vancouver Winter Olympics, that homeless have continuously been shuttled into the Valley. This was an issue that former Mayor Sharon Gaetz always denied.