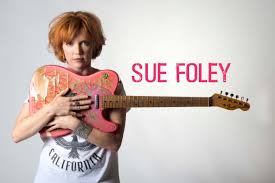 Chilliwack/Austin – Canada’s blues favorite, Sue Foley, will be performing at Chilliwack’s Bozzini’s on March 5 and 6. Her label debut for Stony Plain Records, The Ice Queen, was last year.

FVN’s Don Lehn spoke with Sue (from her home in Austin, Texas) about her career, influences, social media’s impact on blues and her favorite places to play.

Tickets are $35 and more info can be found here.

She won the 2001 Juno Award for Blues Album of the Year for Love Coming Down, and got the Juno nomination in the same category for her new album The Ice Queen (those awards handed out March 16, 2019.) She also holds the record for the most Maple Blues Awards with 18, adding to her record for most nominations by a single artist in Canadian music history.

In the past few years, Foley has come full circle when she returned to Austin, TX and started collaborating with some of her old friends and many Texas musical legends including Jimmie Vaughan and Billy Gibbons (ZZ Top). Foley is the only female member of the famed “Jungle Show” which features Gibbons, Vaughan, B3 virtuoso Mike Flanigin and Chris ‘Whipper’ Layton (formerly of Steve Ray Vaughan and Double Trouble). “The Jungle Show” was one of the hottest tickets in Austin and this led to going into the studio right away to record The Ice Queen.

That album is easily one of her most exciting, accessible and melodic albums to date, and the album was the #1 album on the Canadian Folk/Roots/Blues Chart for over 10 weeks and still in the Top 30 since its release in March this year, and she’s getting some of the best reviews of her life for the record.