Abbotsford – OCTOBER 1 UPDATE –  Local artists were celebrated Saturday evening at The Reach Gallery Museum with the presentation of the annual Arty Awards. The awards, now in their fourteenth year, are administered by the Abbotsford Arts Council and honoured artists in nine categories including Lifetime Achievement, which was presented to local potter Herman Venema.

A long-time resident of Abbotsford, Venema has worked and taught out of his Harris Rd. studio since 1970. The award was handed out by last year’s Lifetime Achievement recipient Norm Williams.

The gala event began with a blessing from Chris Silver of Sumas First Nation, a welcome from Abbotsford Arts Council Executive Director Jennifer Trithardt-Tufts, and remarks by Mayor Henry Braun, and featured performances by The Crescent Sky, Brander Raven McDonald, and last year’s Performing Arts winner Sunee Dhaliwal. The evening also included an In Memoriam for local poet Ted Goodrich, a nominee who passed away earlier in September, and was hosted by this year’s Arty Awards Coordinator Harry Doupe.

SEPTEMBER 28 – ORIGINAL STORY  – The nominations are out for the 14th Annual Abbotsford Arty Awards, Saturday September 29 at the Reach Gallery Museum. Tickets are $20 each and more information can be found at abbotsfordartscouncil.com 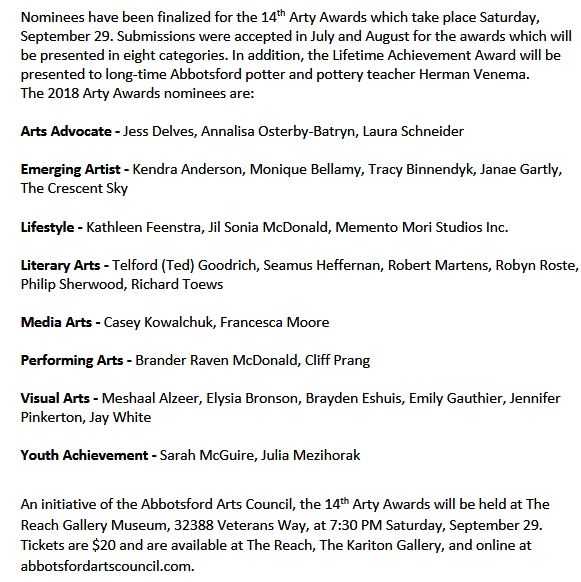