Highway One – All Lanes Open In Both Directions

NOTE – The Ministry of Transportation says there will still be periodic lane closures throughout the week as the cleanup continues.

The ministry will provide an update when all lanes have been reopened.

The maintenance contractor will remain on site with a single lane closure, rebuilding the shoulders and working to clear the significant amount of debris that remains alongside the highway.

Motorists are advised to expect delays and watch for traffic personnel and flaggers in the area.

9:20AM NOVEMBER 26 UPDATE – While traffic is trickling through , one lane each way on Highway One, a complete reopening of all four lanes, is expected to happen later today.

That is all weather permitting.

On top of that there is yet another standard November snowfall warning for the Coquihalla.

East bound lanes will not be completely open to traffic until Sunday. Ministry of Transportation are dealing with three areas that are part of a mass clean up.

From the Ministry of Transportation:

Motorists travelling on Highway 1 east of Chilliwack are advised that the westbound lanes are now open to counterflow traffic, after three mudslides closed the highway in both directions Thursday morning near Bridal Falls.

Crews have been working throughout the night to reopen the westbound lane to traffic. Approximately 17,000 cubic metres of material covered both the eastbound and westbound lanes. In some areas, the debris was approximately five metres deep.

Twenty-five pieces of heavy equipment – six excavators, eight tandem dump trucks, three large rock trucks, two water trucks, one bulldozer, three front-end loaders, one hydrovac and one sweeper – are on site to assist with the cleanup to remove mud, trees, rocks and debris that covered both lanes of the highway.

Following the opening of the westbound lanes, crews will turn their attention to clearing the eastbound lanes, which have considerably more debris. The ministry expects to open the eastbound lanes on Sunday, which is a day later than originally forecasted. Crews are dealing with a significant amount of debris, and ongoing weather conditions are slowing progress.

The ministry thanks the public for their patience while this work is underway. Motorists are advised to obey traffic personnel and watch for flaggers.

Motorists are also advised to check DriveBC for the latest updates and plan their route accordingly. 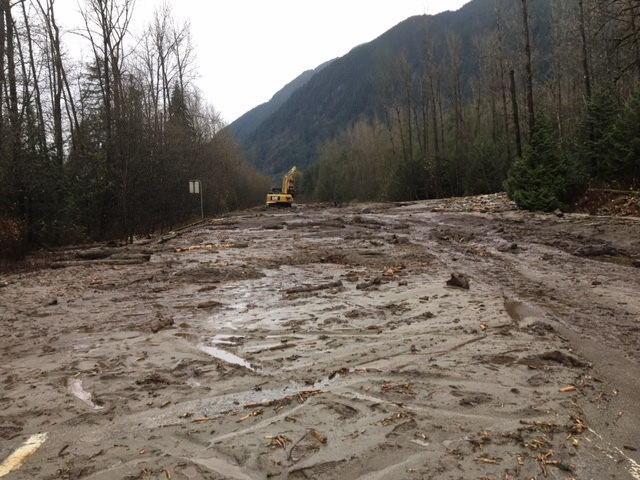 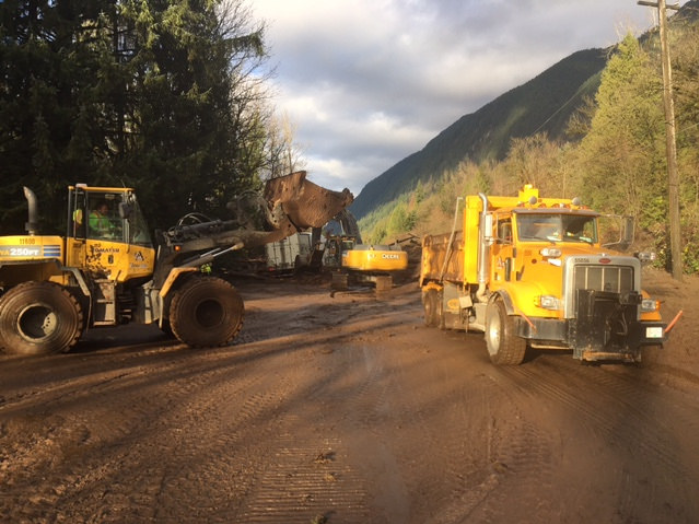 8AM UPDATE – Motorists are advised that Highway 1 remains closed in both directions east of Chilliwack due to three mudslides that closed the highway Thursday morning.

The ministry anticipates that it will have one lane open to alternating traffic by noon Friday with a full opening of both lanes by Saturday afternoon.

Geotechnical engineers have completed their detailed review of the area, located near Bridal Falls. Highway crews and heavy equipment are now cleared to begin cleanup and start removing the large amounts of debris covering the highway in both directions. Extra equipment and staff have been brought to support the cleanup efforts.

The ministry thanks the public for their patience while this work is being done. Motorists are advised to check DriveBC before they set out and plan an alternate route.

NOVEMBER 23 ORIGINAL STORY – EAM Operations shared these photos of the mud and rocks on the road from the overnight slide.

The photos are Bridal Falls on Highway 1.

Continue to use Hwy 7 & Hwy 9 between Hope& Bridal Falls.

Use caution around Hwy 7 & Haig scale with debris clean up taking place.

Three people were trapped in their vehicles due to the slide but all three are OK.

Fraser Cascade School District : No bus service for students at St Elmo Road and west; Bus #8 (Chawathil will be late). 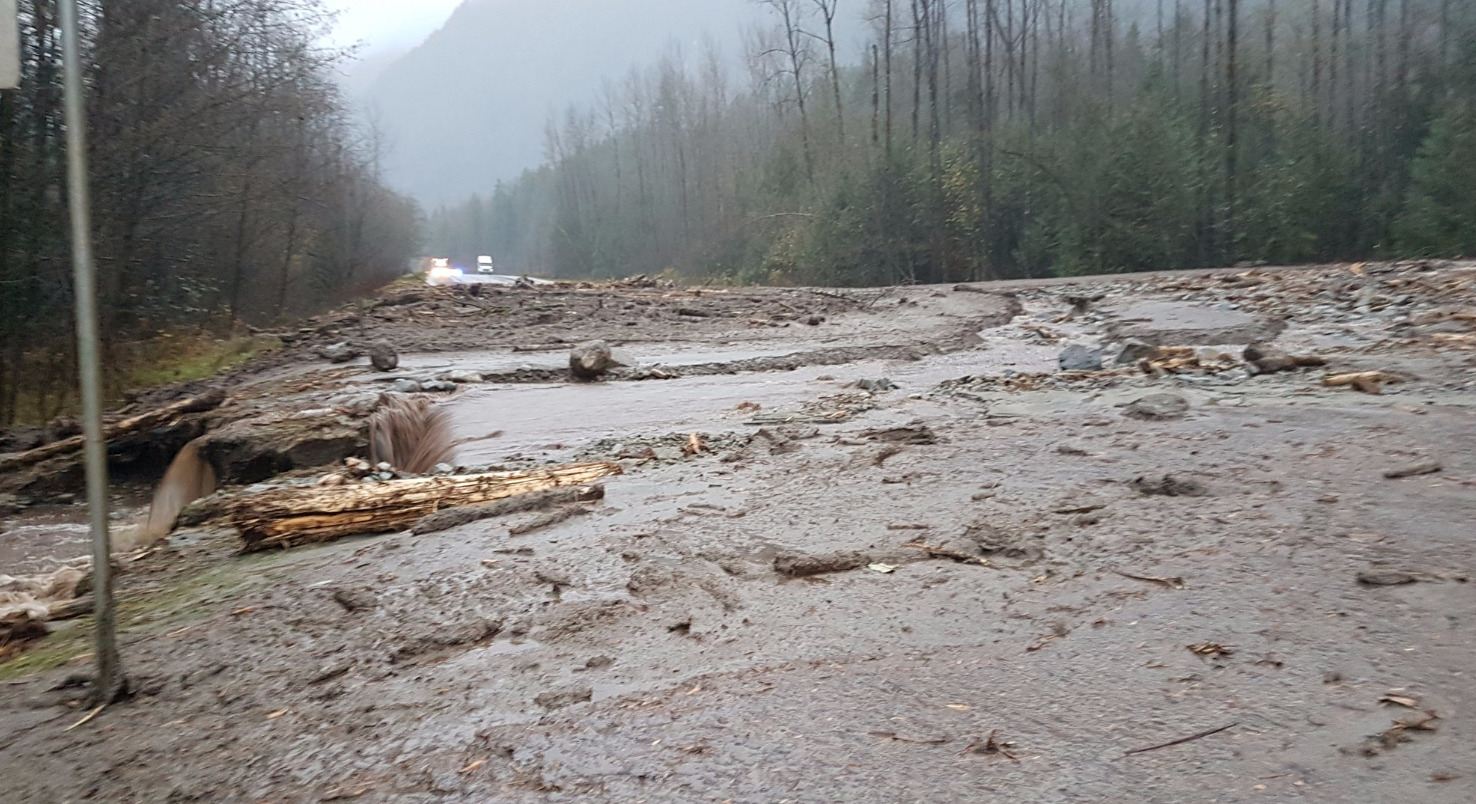 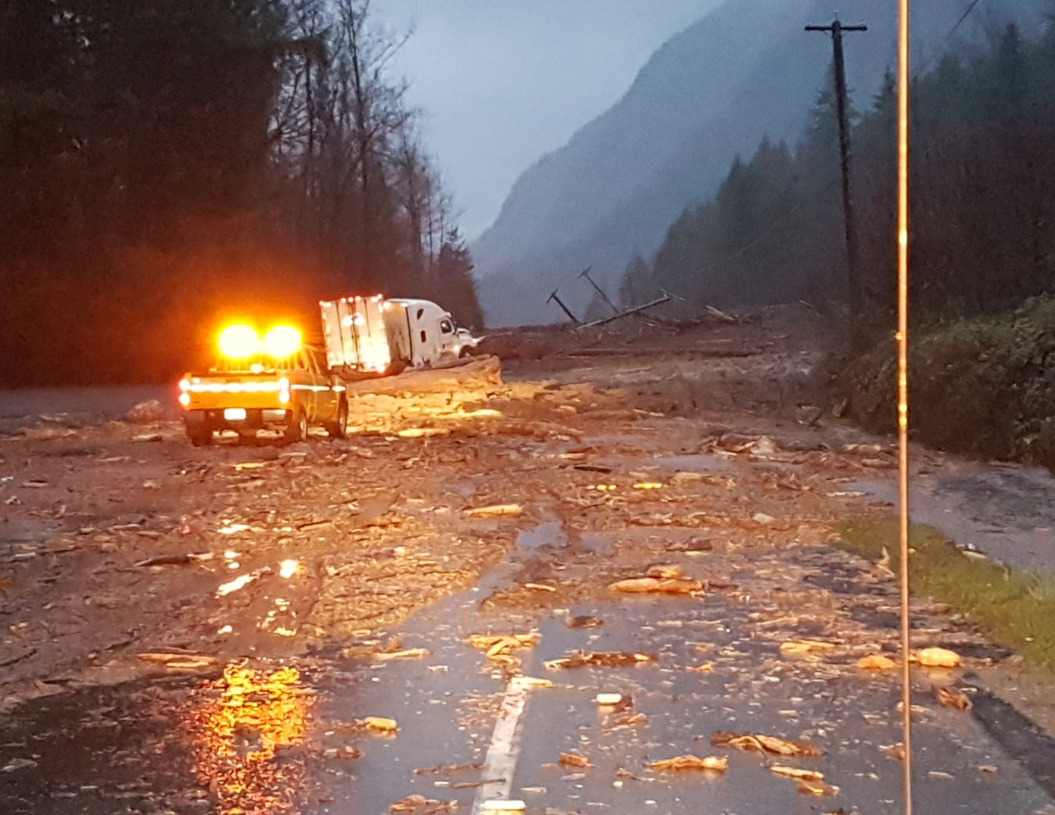