Men’s Basketball: Cascades make it rain from beyond the arc, douse Heat 86-67 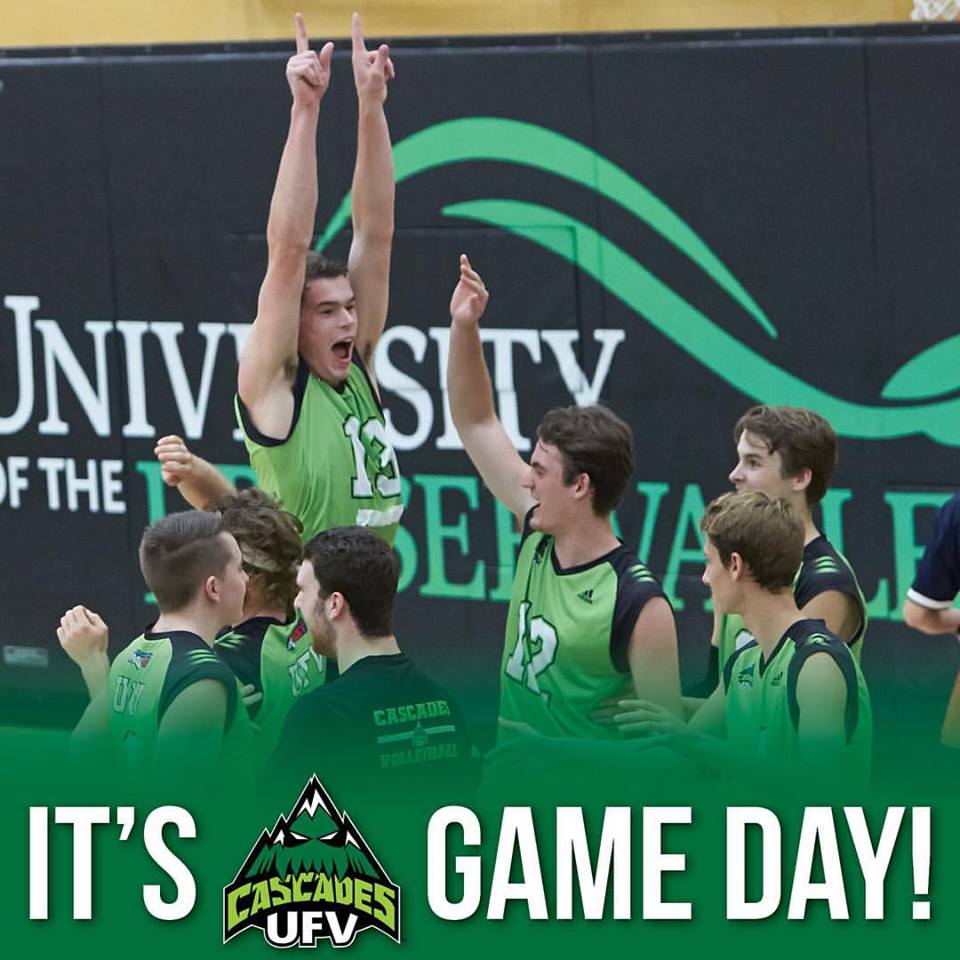 The University of the Fraser Valley men’s basketball team buried the UBC Okanagan Heat under an avalanche of three-pointers on Saturday evening, en route to an 86-67 victory at the Envision Financial Athletic Centre.

The Cascades hit 50 per cent of their attempts from downtown (17-for-34), including 11 during a scalding-hot first half which saw the hosts lead by as many as 23 points.

UFV’s forwards were responsible for the vast majority of the damage from beyond the arc. Mark Johnson went 8-for-13 on threes on his way to a game-high 29 points, and 6’10” Sukhman Sandhu drilled 5-of-9 attempts from the land beyond as part of his 21-point outburst.

“The threes were obviously fun,” UFV head coach Adam Friesen said afterward. “We worked the ball and found some good looks. But we also had more assists than turnovers (23 to 16), our transition defence was by far our best, and our combination with the low-post stuff was also really good.

“The threes are what you’ll remember from the game, but all the other aspects, we’ve had moments of struggle with throughout the year. We put together a lot of really good areas of the game for 40 minutes.”

The Cascades’ long-range pyrotechnics began in the first quarter – they hit 4-of-8 from downtown, including a pair from Johnson, and held a 20-7 lead at the end of the frame.

Things got downright absurd during the second quarter. Johnson and Sandhu combined for six treys in a span of just over four minutes, sending the Envision Financial Athletic Centre faithful into hysterics as the lead ballooned to 43-20.

The Heat fashioned a 7-0 run, with four points from Aloysius Callaghan, to draw back to within 43-27 at the break. But the third was the Cascades’ most productive quarter – they mustered 26 points in the frame, and stretched the lead to 24 (66-42) on Andrew Morris’s triple with 1:40 left.

The fourth quarter was drama-free as the Cascades completed their first weekend sweep of the season. They were coming off a 68-61 win over UBCO on Friday.

Johnson added eight rebounds to go with his game-high point total, and also had an outstanding weekend at the defensive end, drawing the assignment of guarding UBCO leading scorer Aldrich Berrios.

Sandhu, the Cascades’ towering sophomore from Surrey, B.C., bounced back from his first scoreless outing of the season on Friday to post a career high in points. He had as many points as minutes (21) and added five blocks, four of which came in the first quarter.

“Mark played well, and we expect him to play well,” Friesen said of the Cascades’ fourth-year forward from Palm Springs, Calif. “But for Sukhman, he really showed the ability to not just knock down shots, but he started the game by playing in the paint. He blocked shots, he grabbed boards, he was competing – not just waiting for his three-point shot to come around. If he can do that and work his game out to the three-point line, that’s where he’ll have the most success.”

Morris (14 points) and Daniel Adediran (12) also scored in double figures for the Cascades, who prevailed despite being outrebounded 48-33.

Berrios marked a career milestone for the Heat – his 17 points on Saturday gave him 1,001 in his Canada West career. He’s the third UBCO player to reach that plateau, joining Mitch Goodwin (1,204) and Matt Gowing (1,028).

Callaghan counted a trio of triples among his UBCO-best 22 points, and Triston Matthews had a double-double with 12 points and 10 boards.

The Cascades wrap up their first-semester schedule with a pair of road games next Friday and Saturday at the Lethbridge Pronghorns.

Women’s Basketball: Cascades lock it down on defence to cap sweep of Heat

The University of the Fraser Valley women’s basketball team’s dominance at the defensive end was comprehensive on Saturday, as they beat the UBC Okanagan Heat 65-37.

The Cascades limited the Heat to 21.8 per cent shooting from the field, and held them to single-digit point totals in three of the four quarters en route to the decisive victory.

At the other end of the floors, Shayna Litman (17 points, 12 rebounds) and Sara Simovic (15 points, five assists) set the pace offensively as UFV improved to 4-6 in Canada West play. The Heat fell to 0-8.

“I feel like we’ve been somewhat of a solid defensive team for most of the year, and it’s good to see that trend continuing,” said Cascades head coach Al Tuchscherer, whose squad was coming off a 65-48 win on Friday. “I just hope that we’re starting to develop a little bit of an identity for our team where we’re tough to play against and you’re going to have to take some tough shots to beat us. That was a real encouraging sign, for sure.”

The Heat came out with some energy, building a quick 5-0 lead on an Emma Jonas three-pointer and an Emma Johnson layup, and Tuchscherer called a timeout shortly thereafter with the visitors’ lead at 7-3.

It was all UFV from that point – they ended the first quarter on a 9-0 run and surged ahead 32-16 at halftime. The Heat made a third-quarter push to cut an 18-point deficit down to 12, but the Cascades got the lead up to 20 points on Taylor Claggett’s layup to open the fourth quarter. They cruised home from there.

No Heat player was able to crack double digits in scoring – Jonas and Lindsey Bott tied for team-high honours with seven points apiece.

“I felt it was a little bit different game tonight, for sure,” Tuchscherer said, reflecting on his team’s offensive performance. “They took some things away from us a little bit, but I’m still pretty happy with how we shared the ball. We did pretty well on that, and we knocked down some shots tonight.”

The Cascades wrap up their first-semester schedule with a pair of road games next Friday and Saturday at the Lethbridge Pronghorns.

The University of the Fraser Valley men’s volleyball team was unable to conjure the same magic that had sparked an upset win over the Vancouver Island University Mariners on Friday, falling in straight sets in Saturday’s rematch in Nanaimo.

In Friday’s clash between the two nationally ranked teams, the CCAA No. 14 Cascades had fashioned a highly impressive five-set triumph over the No. 3 Mariners. VIU struck back in the rematch, prevailing by scores of 25-18, 25-20 and 25-14 to snap UFV’s four-game win streak.

The Cascades head into the semester break with a 6-6 record, good for third place in the PACWEST, while the Mariners are tied for first with the Capilano Blues at 10-2.

“We got off to a bit of a slow start in the match,” UFV bench boss Kyle Donen said. “We had a bit of rhythm in the second set, we started really well, but we didn’t have much of a response when they started to push back. We struggled to pass as a team, and they served pretty tough, and we had a hard time containing that on our own side.”

Fifth-year left side Nick Bruce led the Cascades offensively as he’s done for much of the fall, racking up a team-high 13 kills.

Saturday’s game was the last of 2017 for the UFV squad – they return to action Jan. 5-6 with road games vs. the Douglas Royals.

“I think our record is kind of how it feels – a little bit up and down,” Donen said, reflecting on the Cascades’ 6-6 mark. “But I think given the teams we split with, I feel relatively good about how we played. We’ve had a good second half of the first semester (going 4-1 over their last five games). I think we can feel pretty good about a split this weekend. Obviously losing tonight is not what we were hoping for, but we’ll be happy to be where we are. Being in sole possession of third place is a good place to be. I hope we can build on that, and continue get better next semester.”

The University of the Fraser Valley women’s volleyball team fell to the Vancouver Island University Mariners for the second straight day, dropping a three-set decision on Saturday in Nanaimo.

Despite the straight-sets nature of the defeat, the Cascades put together a better performance than they had in Friday’s series opener, also a three-setter. The set scores (26-24, 25-23, 25-21) were much closer in the rematch.

The CCAA No. 7-ranked Cascades close out the semester with a 7-5 record, good for third place in the PACWEST. VIU (10-2) is tied for first with the Douglas Royals.

“We played very well in the first, but we didn’t force them to win any points,” Cascades head coach Mike Gilray said, noting that his squad had 17 errors in the first set to counterbalance some sharp offensive play. “Being able to walk that fine line of being aggressive and making good choices is the difference between good and great.

“They were the better team this weekend.”

The game pivoted in the late stages of the first set. The Cascades built an 18-14 lead, but the Mariners came roaring back to tie it 19-19. Later on, UFV led 23-22, but VIU scored four of the next five points to take it 26-24 and seize the momentum.

The hosts were in good form in the second set, building a 21-11 lead, but the Cascades mounted a comeback to draw to within 24-23, with Alexis Edwards reeling off a lengthy service run. The next point went the Mariners’ way, though, and they took a two sets to none lead.

VIU fashioned a 14-9 lead in the third, and while the Cascades were able to close to within 15-14, the Mariners pulled away once again and put the finishing touches on the victory.

Gilray noted that his team had also struggled with errors the previous weekend against College of the Rockies, but were able to win both games due to the fact the Avalanche were depleted by injuries. The juggernaut Mariners, though, made them pay for those miscues.

Libero Amy Davidson had a strong outing for the Cascades, racking up 19 digs, and left side Kim Bauder paced the attack with 12 kills and added 12 digs. Rookie setter Olivia Heinen registered 35 set assists, and Amanda Matsui chipped in with eight kills. Cassidy Pearson sparked the team offensively in the third set, coming in off the bench to earn four kills from the left side.

Saturday’s game was the last of the semester for the Cascades. They return to action Jan. 5-6 with road games vs. Douglas.